Wellington, FL – February 24, 2013 – The 2013 FTI Consulting Winter Equestrian Festival concluded its seventh week of competition, sponsored by Hermès, with action at two parts of the Palm Beach International Equestrian Center on Sunday. At The Stadium, Irish riders Andrew Bourns, Darragh Kenny, and Shane Sweetnam swept the top three in the $50,000 Hermès Jumper Derby with a win for Bourns and his mount Gatsby. In the International Arena, Praise and Sheila Motley won the Peggy Cone Memorial WCHR Adult Hunter Classic. Tina Allen and French Kiss were victorious in the $5,000 WCHR Amateur-Owner 3’3″ Hunter Classic.

Richard Jeffery of Bournemouth, England, set a demanding track for Sunday’s jumper derby that featured 20 numbered obstacles, including the derby bank, table bank, open water, devil’s dyke and more. The number of challenging natural obstacles along with the length of the course and the heat of the day tested the stamina of all of the horses and riders competing. With only two clear rounds completed in the faults converted format, speed was key, and the top three riders finished with just three one-hundredths of a second separating them.

Watch an interview with Andrew Bourns, winner of the $50,000 Hermès
Jumper Derby!  http://www.youtube.com/watch?v=oP-olag2e3c

Andrew Bourns and Gatsby went third in the order and cleared the course in 138.27 seconds to take the early lead. Two rounds later, Shane Sweetnam and Spy Coast Farm, LLC’s Little Emir had the time well in hand in 134.30 seconds, but a rail cost them four faults to eventually finish third in 138.30 seconds. Luis Larrazabal (VEN) and Gustavo Mirabal’s G&C Lepanto were even faster in 131.17 seconds, but had two rails down to finish fourth with a final time of 139.17 seconds. Darragh Kenny took the second place prize with Hays Investment Corporation’s Any Given Sunday. The pair had a total time of 138.29 seconds with time taken after a refusal at the devil’s dyke. 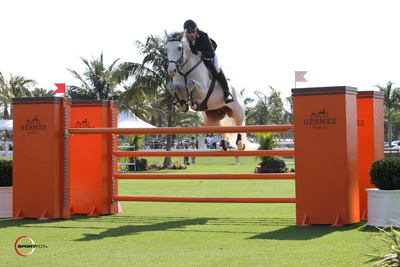 Winning horse, Gatsby, is a nine-year-old Irish Sport Horse stallion by Simba x Cruise On. Andrew Bourns purchased Gatsby four months ago in Ireland and just recently brought him over to the U.S. This is the pair’s fourth week showing together and they have had consistent results.
“I am very happy for him today,” Bourns stated after the class. “It was a big ask and I think it was a big step up for him and he really answered the call. I was a little worried about the length of the track and the heat. I thought it might take its toll, but he actually held up very well. Coming to the last fence he was pulling me just as hard as he was to the first fence. I was very happy with that.”

“He has never shown on this field before,” Bourns added. “Our relationship is very new, the combination is very new, so we are still trying to figure each other out. There were a few moments on the course where it got a little bit hairy, but he stayed careful and he just kept trying right away to the end.”

Bourns did not think that his time would hold up with the horses and riders that followed in the class, but he knew that he had a great round.
“I thought it was a fantastic round and I was extremely happy with the horse,” he stated. “I was very confident in a top two or three finish. I did not realize it would be as close as it was. When Darragh was coming down the last line I really thought he had me and then he stopped. As the class went on, I realized the track was quite tough and it wasn’t riding as easy as we thought, so I got more and more confident. When you are talking hundredths of seconds, it is very hard to be confident that you are going to win a class right until the very end.”
“I am glad I was as fast everywhere because there was nothing in it,” Bourns reflected. “It was right down to the wire. For even the top four spaces, it was so close. Over a track that length, you have to be a little bit relentless. You have to keep being fast everywhere because it is so long and it is such a large amount of time to stay riding. It was a big ask, but I think a lot of the horse and everything I have done so far he has been very consistent and extremely brave.”
Second place finisher Darragh Kenny was also very happy with his mount, Any Given Sunday. Despite a stop on course the pair still had one of the fastest times.
“My horse was brilliant,” Kenny praised. “He did everything I wanted, even probably faster than I expected. I didn’t even school any of these jumps or test the waters at all, so he was really brave. I was a little bit too fast to the dyke and I probably should have showed it to him first. It shocked him a little bit the first time and I just spun right around. He was fantastic. He is a super horse and he is so easy and brave. It was really simple for him. He stayed really careful at a really fast speed and tried so hard. It makes my life easier.”
Third place finisher Shane Sweetnam has had a lot of success with his experienced mount Little Emir, including the same placing in this class last year. Sweetnam noted that he had a fast time last year as well and ironically had the same jump down, but he was very happy with his horse.
“He was a good boy and he really tried hard,” Sweetnam stated. “My speed was good enough. I thought that I might still have them with one down, but I think I might have gone a bit wider up on the bank than I did last year. I was still very happy with him. He gives you everything when he goes in there, so he doesn’t owe me much. I thought it was a good class and a good crowd.”
Bourns agreed that the class was a real crowd pleaser. “Any time a class goes down to the wire with such a tight margin, it makes it fun for everybody. It was thrilling,” he noted.
“I have to thank the sponsors as well,” Bourns added. “Thank you to Hermès. I think they did a very nice job and I hope they all had a nice time. We put on a good show for them.” 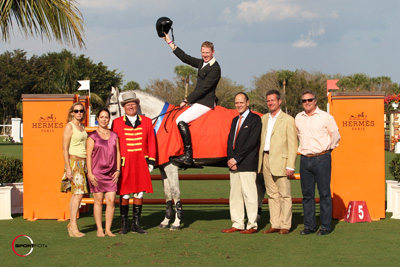 Praise, an eleven-year-old Royal Dutch Warmblood stallion owned by Dr. and Mrs. Kenneth Garber, and Motley were the pair to beat after a high score of 85 early on in round one and secured their victory with an 87 as the final trip in round two. With an overall score of 172, the pair edged out second place finishers Arriana Boardman and Gatsby by only a quarter of a point. 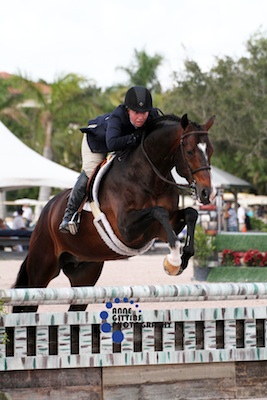 Motley returned to the show ring during the 2013 FTI WEF after taking time off to have her son, Collins. Motley is happy to be back in competition, especially aboard a horse as spectacular as Praise. The pair has is currently first in the FTI WEF circuit standings for the La Mundial Adult Amateur Hunter 18-35 Section B division after taking home an extraordinary four championship titles.

“I have a great horse in Praise. He’s done the derbies with Kelley [Farmer] and Holly [Orlando] for a couple of years, so there’s nothing like having one of those horses under you going into the Adults. I couldn’t be more thankful to Ken and Selma Garber for letting me show him down here all circuit,” Motley stated.

Although Motley and Praise have been unstoppable in the ring every week at the FTI WEF, Sunday’s victory was especially significant. “WCHR week is the most prestigious week for hunters. Missing champion [Saturday] was a little bit of a let-down, so I couldn’t be happier,” Motley commented.

Praise and Motley led the class after round one, but were last in the arena for round two as they chased Boardman and Gatsby’s first place standing. “Arriana is a great rider and [Gatsby] is a wonderful horse, so I knew that she was going to be good. I was maybe little more nervous than I would have been ordinarily. When you have other great riders like that with you, it makes you rise to the occasion,” Motley acknowledged. 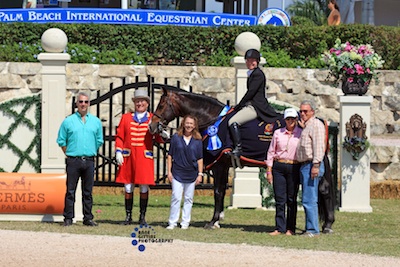 Not only is Motley managing to juggle motherhood with the demands of showing, she also runs her own event management company in Wellington. She credits the team at Lane Change Farm with enabling her to remain competitive at a high level.

“It’s all about the people you ride with. You have to be able to show up and trust that the horse has been prepared and if you have the right team with you, there’s no need to worry. I hire the right people for my business, and Kelley and Larry [Glefke] do the same,” Motley described.

While Motley’s professional life will continue in high gear, Praise will be enjoying a well-deserved slow down from showing while he continues being marketed to be bred. “Maybe he found some dates today. He’s on the market, he’s dating!” Motley joked.

The $5,000 WCHR Amateur Owner 3’3″ Classic was the final class held in the International Ring on Sunday afternoon. Tina Allen and French Kiss won the class with an overall score of 168.5. French Kiss, a nine-year-old Westphalian gelding, was in third place after round one of competition with a score of 82 and came back late in the second round with an 86.5 with Allen in the irons. 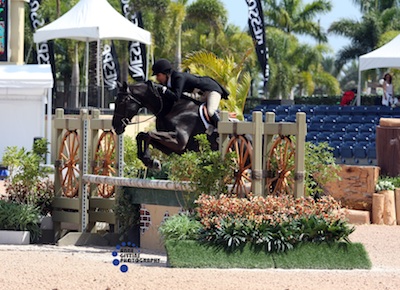 “French Kiss felt great, it was his second time in the International Arena this week. He felt comfortable on Friday and again today,” Allen described. “The courses rode nicely, they felt a little ‘handy-ish.’ The turns keep his interest. The ring is beautiful and the fences are all inviting.”

French Kiss and Allen have been showing at the FTI WEF for most of the 2013 circuit, picking up reserve championship honors in the FarmVet Amateur-Owner Hunter 3’3″ 36 and Over division just last week. “He’s been really consistent and I’m really happy with him,” Allen commented.

Like the rest of her fellow competitors, Allen takes extra pleasure in winning during the hunters’ biggest week at the FTI WEF. “It’s special for sure to win this week. I’m really happy to have won today. Everyone loves competing during Hunter Week and it draws a big crowd,” Allen concluded.

Florida Children’s and Pony Classics were the final rounds of WCHR competition during week seven. Francesca Dildabanian and Larkspur earned the top prize for the $2,500 Children’s Hunter 14 and Under Classic with a combined score of 176. Larkspur is a twelve-year-old Oldenberg gelding owned by Ashley Whitner. Gabriella Hurtadorode Dragonfly, an eight-year-old Oldenberg gelding, to a blue ribbon finish in the $2,500 Children’s Hunter 15-17 Classic with an overall score of 165.

The winner of the Large Children’s Pony Hunter was Chatsworth and Emma Kurtz. Chatsworth, a nine-year-old Dutch Riding Pony gelding owned by Victoria Press, jumped to a final score of 168 with Kurtz in the irons. Sophia Marino and her own Posh, a thirteen-year-old Welsh Pony/Connemara cross mare, emerged victorious in the $2,500 Small/Medium Children’s Pony Classic with a combined score of 163. 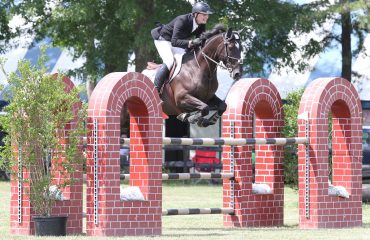 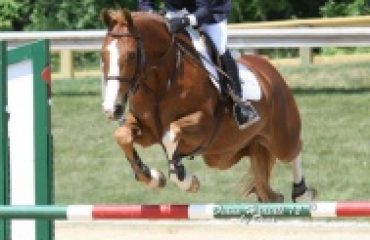 Juniors and Amateur-Owners Win Big with Nearly $35,000 Awarded at Horse Shows by the Bay Equestrian Festival 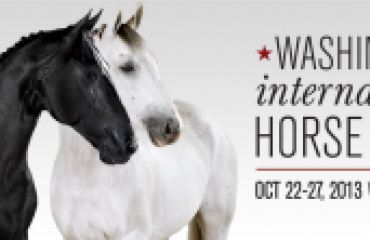