The $25,000 Holiday III Grand Prix was the highlight event of the weekend, held on Sunday afternoon in the International Arena at PBIEC. Jumping a track set by Mexico’s Anna Catalina Harris Cruz, 47 entries contested the first round course, and 10 advanced to the jump-off with three double clear rounds. Second to jump-off, Ireland’s Paul O’Shea and Primo de Revel, owned by Michael Hayden, had the fastest round of the day in 35.029 seconds that could not be beat.

Darragh Kenny (IRL) and Goldrush, owned by Alexander LLC, finished second in 35.943 seconds. Jimmy Torano (USA) and Ben Maher’s Dolores MB placed third with their time of 38.655 seconds. Alex Granato (USA) was fast with Paige Tredennick’s Zenith Dance in 35.173 seconds, but the pair had one rail down in the jump-off to finish fourth. 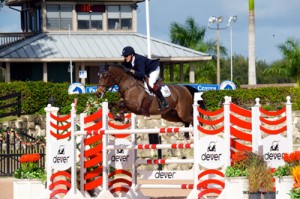 O’Shea was excited to get another win this week and see his top horse continue to perform consistently. “He just knows his job, and he always does the right thing,” the rider remarked. “He is good everywhere. It doesn’t matter where he goes, he just has a great mind.”

O’Shea and Primo de Revel were second to go in the jump-off out of 10 and stuck to their plan on course. “I saw the first rider go, but I just did what I had decided and everything came up good,” O’Shea explained. “I think we all did the same thing. The main difference was the last fence. The fence was in the corner, very close to the stands, and we were coming at it at a little bit of an angle. It was a little bit difficult, but it actually helped me because we went down there quite fast and it kind of backed him up, so he gave a really good jump over it.”

O’Shea has been riding Primo de Revel for nearly seven years and has a great relationship with the horse in and out of the ring. “We have been friends a long time now,” O’Shea acknowledged. “He is like the stable pet. He is like having a dog around the place. He is very quiet. He is just a real gentleman, and he is very easy to do everything with.”

At home or at the show, Primo de Revel is a class act with a simple training routine. “He is just really straightforward,” O’Shea said. “He really knows his job. Everything kind of came naturally to him, so we don’t do much. Most of the time I don’t even jump him at home. You don’t need to train him because he just goes, and he just does everything. We focus on keeping him fit, keeping him happy, and keeping him interested. He goes in the field everyday. Nothing stresses him out. He is very laid back.” 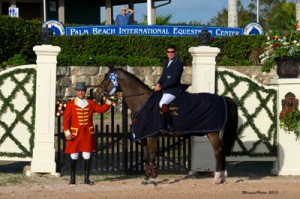 Primo de Revel will conclude a fantastic season with one more night class, competing in two weeks in the $25,000 ESP Holiday Finale Grand Prix on Saturday, January 4, at 7 p.m. O’Shea then plans to give the horse a well-deserved break and only work him lightly throughout the winter, gearing up to show again in the spring.

ESP’s Holiday Festival III began on Friday afternoon with a win for Darragh Kenny in the $10,000 Open Jumper Stake class riding Skara Glen’s Basel, owned by Mershad Stables LLC. The class saw 38 entries with 10 qualifiers for the jump-off. There were six double clear rounds and Darragh Kenny and Skara Glen’s Basel had the fastest time of 34.107 seconds for the win.

A full schedule of hunter competition was also featured throughout the weekend with many top horses and riders. In the combined Amateur-Owner Hunter 3’3″ and 3’6″ division, Chris Brown guided his horse Pillow Talk to championship honors with Paige Tredennick and Apricot Lane finishing in reserve.

Kelley Farmer swept the First Year Green Working Hunters, earning the division championship with Certainty and the reserve honors with High Regard, both horses owned by Glefke and Kensel LLC. Farmer also earned the championship in the combine Second Year/High Performance Working Hunter division with High Regard. There was a tie for the reserve championship between Farmer and her mount Verbatim, owned by Glefke and Kensel LLC, as well as Jennifer Bliss riding Harris Hill Farm LLC’s Poker Face.

In the equitation, Spencer Smith rode Artisan Farms LLC’s Naturel to a clean sweep of the the Pessoa/USEF Hunter Seat Medal presented by Randolph College as well as the ASPCA Maclay and WIHS Equitation classes. For full results, please visit www.showgroundslive.com. 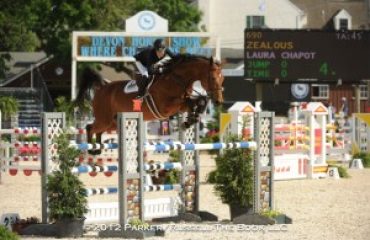 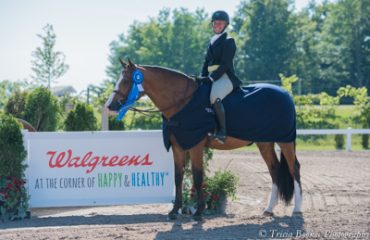 Kenya and Caitlyn Shiels Triumph in $2,500 USHJA National Hunter Derby at Horse Shows by the Bay