Wellington, FL – February 13, 2013 – The sixth week of competition at the 2013 FTI Consulting Winter Equestrian Festival (FTI WEF) began on Wednesday, February 13, with a full schedule of world-class jumper competition in the International Arena at the Palm Beach International Equestrian Center (PBIEC). In the highlight class of the day, an impressive roster of top riders vied for Longines FEI world ranking points in the $33,000 G&C Farm 1.45m Jumper Classic with a win for Todd Minikus of Loxahatchee, FL, and Quality Girl.

Brazil’s Guilherme Jorge set the speed track for 48 entries in Wednesday’s 1.45m class. Ten entries completed successful rounds without fault in the race against the clock, and Minikus and Quality Girl came out on top with their time of 54.51 seconds. 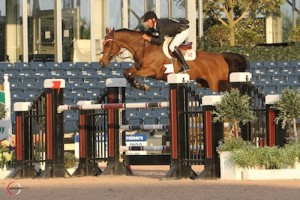 Minikus got Quality Girl, a ten-year-old Oldenburg mare by Quidam’s Rubin x Dobrock, just before the start of the FTI WEF circuit and has had made consistent development with her showing.
“I think she is a very special horse,” Minikus stated. “She is a little green, but she has been working up the ranks quite well; she has gotten herself some nice ribbons. She was fifth in a WEF (Challenge Cup) and she has jumped two Saturday night grand prix (classes). She had four faults in both and to be truthful, they were Todd’s four faults. Today she went absolutely fantastic and I think we have some good things to come.”

Commenting on his winning round in Wednesday’s speed class, almost two seconds faster than second place finisher Shane Sweetnam, Minikus detailed, “I caught a nice jump to number one and did eight strides from one to two. Then I don’t know how many strides I did the rest of the way around, but she really covers the ground pretty quick. When you are horse racing two seconds is a long time. I really caught a nice track to the last jump and she gave one hell of an effort. Her Purina feed kept her energy level up so that she could have the capability to jump the last jump.” 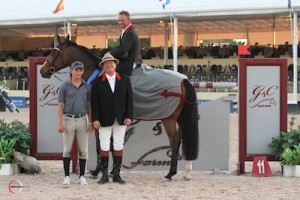 Also showing on Wednesday, the $6,000 Spy Coast Farm 1.40m jump-off class was split into two with its booming list of entries. In section A of the class, Wilton Porter and Sleepy P Ranch LLC’s Paloubet were the winners. In section B, Laura Kraut and Joan Kalman/Freedom Group’s Woodstock O came out on top. The day continued with the $6,000 Spy Coast Farm speed class and a win for Jeffery Welles aboard Merlin, owned by Noel Love Gross. 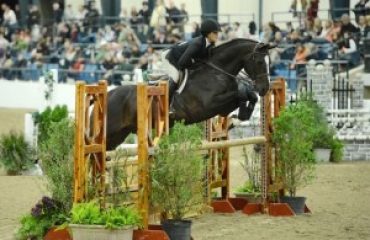 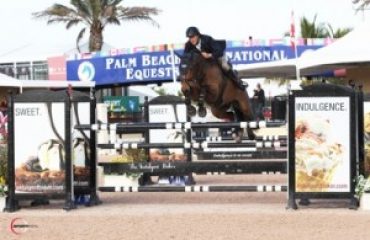