Tampa, FL – March 29, 2013 – In a speedy fashion, Aaron Vale piloted Palm Sunday to victory under the spotlights during the $25,000 Tampa Bay Welcome Stake at the Bob Thomas Equestrian Center. The anticipation was tangible as eight riders moved into the heated jump-off this evening. Riders fought a battle to the top as they tried to qualify for the steadily approaching $200,000 Gene Mische American Invitational to be held at the Raymond James Stadium Saturday, April 6. With Vale’s win tonight, he has sealed his spot in the field of entries. 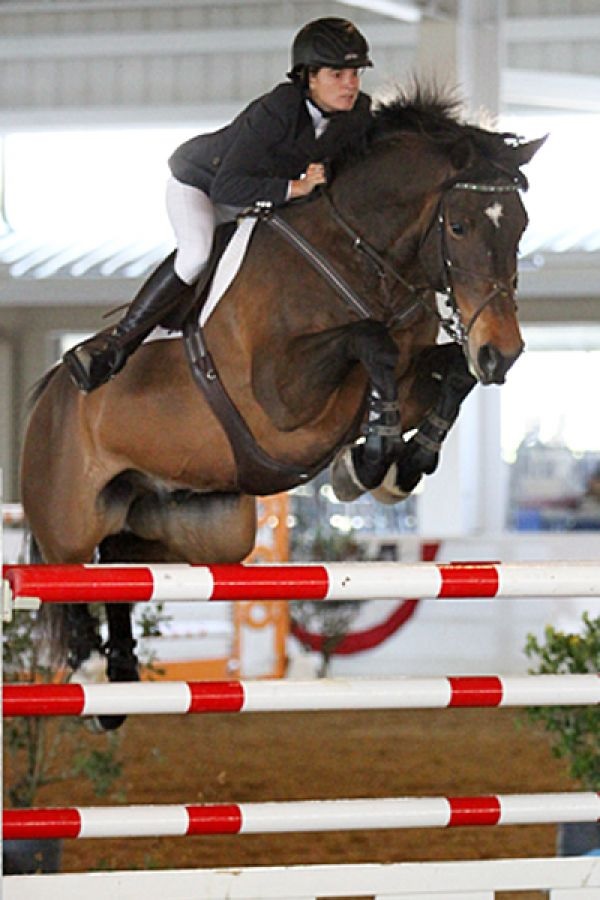 A field of 31 riders showed in the Covered Arena over Michel Vaillancourt’s first round course. It began with a large oxer with twin stone pillars leading to a vertical, where riders then had to make a left turn to move through the diagonal blue-and-white vertical. A right hand turn over the green and purple oxer on the far side of the ring prepared riders for the technical opening fence leading to the triple combination heading toward the out gate. Riders then had to take the outside double combination where they were faced with a vertical-oxer, and then make their way over the vertical set at the far end of the ring. It was fence 11 that saw the most rails fall with ten riders finding fault. After landing from the red-and-white skinny, they moved forward over the large final oxer.

Jordan Coyne and Lazaro were the first to master the track with a fault-free round. She was the tenth in the order of go, but she certainly set the standard with only seven other pairs navigating the course leaving all rails in their place. Eight horses in total continued on to the jump-off, adding pressure as the riders attempted to break the beam, while still navigating the technical course with accuracy.

The jump-off course began with the first round’s opening oxer, and was followed by fence 14, which was fence four from the first round set backwards. With a hard rollback to the right, riders took fence two from the first round in the opposite direction, and made a hard right rollback to 7b of the triple combination. The wide red-and-white oxer forced riders to take a left turn to the double combination, where they then made a hard left to the dreaded skinny vertical. Upon landing, riders raced for home over the final liverpool obstacle.

“I thought he did a great course,” New Zealand rider Sharn Wordley described. “It was a really good jump-off. Eight clear out of 31 is about the number that you want. It was tough enough, and there were faults coming everywhere. Both combinations were tough, the last fence was tough, the skinny before the last fence was tough. A lot of these horses haven’t jumped indoors in a long time or haven’t jumped indoors at all so to jump that course for their first Grand Prix indoors was tough.”

Coyne and Lazaro were the first to compete over the final test, and with a number of riders coming in behind them, they knew they needed to provide a time and a challenge the other riders would be forced to chase. Coyne picked up a speedy pace to the first fence, and kept the solid pace and tight turns on target. The nerves were high as Coyne sped through the double combination, but all rails stayed in their cups as the horse and rider sliced the outside turn to the skinny, took the oxer with ease, and stopped the timers in 42.936 seconds posting the first of only three double-clear efforts.

“I wanted to go fast, and I planned on making an inside turn after the second jump of the jump-off, but I didn’t look in time so I didn’t get it done, and I think that’s what cost me the class,” eventual second place finisher Coyne explained. “I’m just super happy. I tried to step it up as much as I could after I missed that inside, and I thought I did a pretty good job of making up time. Any top three or even top five finish in a $25,000 is a big deal still. I was really fortunate to have a great season in Ocala, so it’s really nice to come here in a completely different ring and have him go just as well.”

Vaillancourt’s short course soon became the story as faults consistently knocked the teams out of the top rankings. It wasn’t until Wordley and Quick Blue Z took a go, that riders began to see the light of a possible victory. Wordley was the first to pilot his mount through the intertwining obstacles, using a different method to succeed-speed and a slight amount of conservancy. Unlike Coyne, Wordley took a bit of time with the grey gelding, falling nearly four seconds behind Coyne.

“I bought him as a 7-year-old and he’s 11 now. He’s really maturing,” Wordley described. “He won a couple of Grand Prixs last year, and he’s been placing in a couple of big Grand Prix this year. He’s just a little bit quirky, and he’s extremely moody. He’s extremely careful, extremely scopey, but he’s just a moody bugger. He’s maturing into it now, which is good.”

Wordley continued, “The ground was a little slippery in the jump off, so I was a little conservative in a couple places. I didn’t go to fast because I didn’t want him to slip. He’s got some Grand Prix coming up, and I want to do him on Sunday. I’m actually mainly up here so that I qualify for the Invitational on my other horse, but I think we’ve qualified now. I’ve got a really good horse for it, and it will be my first time, so I am quite excited.” 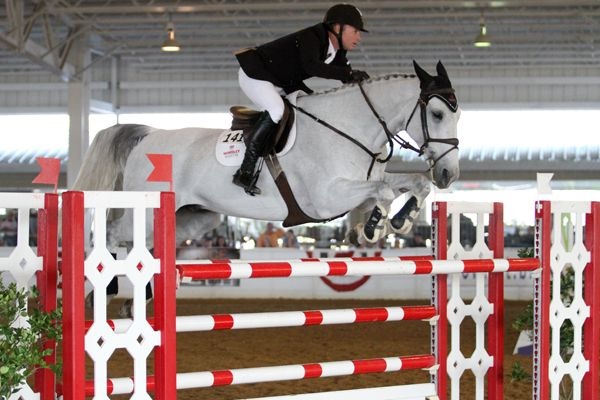 Michael Hughes and Dromma, owned by Vanessa Mannix of Calgary, Alberta, gave the other riders a run for their money. Hughes used speed to his advantage, and as the crowd held its breath, the horse and rider made their way through the track. It was an unlucky rail at 9b that sealed their fate in the eventual fourth place spot. They finished with a four-fault score in 42.149 seconds.

Aaron Vale blasted out of the in gate with his eye on the prize. He spurred on Palm Sunday, owned by Amen Corner Farm of Folsom, LA, taking the tight turns necessary while maintaining accuracy over the impressive obstacles. Vale used the opportunity to open Palm Sunday’s stride after the double combination, clearing the skinny and breaking the beam in 41.122 seconds. Vale posted the fastest time of the night, proving that the race against the clock was no deterrence for the focused pair.

“I was hoping to get a good check so that I can ride again next Saturday night,” Vale stated. “It’s always a treat to get to go jump in Raymond James Stadium. I know these classes count toward qualifying, and I picked up three checks this evening so hopefully that’ll be close enough. Maybe I can get another check or two on Sunday to help get in. Right now Palmer is kind of my longest tenured horse. He’s experienced himself. I mean he’s 14-years-old so he’s had mileage before I got him. I know what he can do and what he can’t do. If we get it right he’s pretty competitive. We kind of got it just right tonight.”

Vale had also shown his other mount Zippo II, owned by 2VR Show Jumpers of Morriston, FL, at the beginning of the jump-off. They had tried to follow in Coyne’s path early in the order to return, but Vale accrued 8 faults with his more recent mount, ending with a time of 45.443 seconds to take the sixth place prize.

“I didn’t ride the first line very well on Zippo-he’s kind of a newer horse for me, He’s got a right drift, so where we wanted to do six, I did seven when he jumped way to the right,” Vale elaborated. I didn’t really get what I wanted on him, but Palm Sunday I’ve had him almost a year now.

Vale continued, “There were a couple things – I figured I could just be quick away from the fences; I made sure to really line up the first line and get down there in the six which he did well, and then boy he ducked in and just kind of cut like a barrel horse off of number two. He was super across there, and then as soon as I hit the ground I ran. I was just fast away from the jumps and tried to make sure I got a good enough approach to clear them. I just played to his strengths in the jump-off their tonight.

Tomorrow will welcome the Junior and Amateur-Owner Jumpers to the Covered Arena for another day of competition, while the Adult and Children’s Jumpers will have the opportunity to showcase their skills in the race against the clock. Sunday afternoon will welcome top riders to compete in the long-awaited Grand Prix of Tampa where riders will compete in the battle of the best. 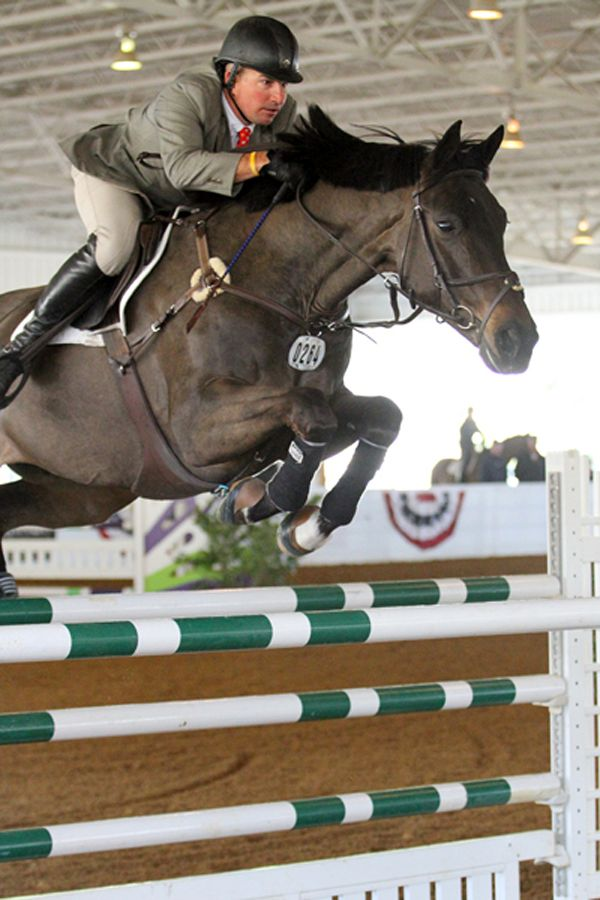 Aaron Vale piloted Palm Sunday to the top of the leader board, scoring the quickest of only three double-clear efforts during the $25,000 Tampa Bay Welcome Stake. Photo By: Kendall Bierer/PMG.

Photo Credit: Aaron Vale piloted Palm Sunday to the top of the leader board, scoring the quickest of only three double-clear efforts during the $25,000 Tampa Bay Welcome Stake. Photo By: Kendall Bierer/PMG. Photograph may only be used in relation to this PMG press release. 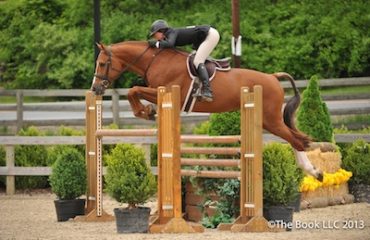 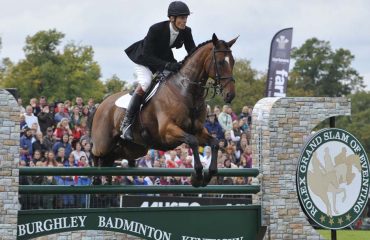 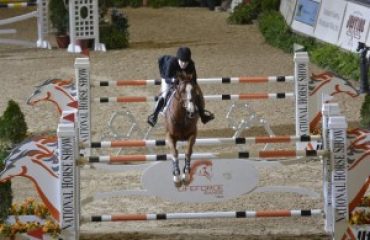