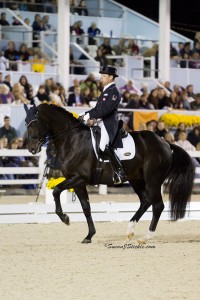 In Friday night’s World Cup Qualifying Grand Prix, Marcus topped a starting field of 11 entries to win with a career-best score of 71.213%.  Victory was especially sweet for Marcus, who suffered an unfortunate elimination at the 2012 London Olympics when Chrevi’s Capital spooked during a heavy downpour and was unable to continue the test.

“The best part was the reliability; Capital let me ride him and did everything I asked of him,” said Marcus of the 12-year-old Danish Warmblood gelding.  “I was able to show the crowd what I had wanted to show them at the Olympics, which is just how great this horse can be.”

After the disappointment in London, Marcus received great support from the crowd at Devon.

“I really felt that the crowd was happy to see us,” said Marcus.  “You could feel how supportive they were and that they really wanted us to do well.  Everyone was excited to see Capital there.”

Cheered on by a large audience in Saturday night’s Freestyle, Marcus overcame an error in his canter work to receive 73.50% from the panel of international judges, which is also the highest score Marcus has ever received for a Grand Prix Freestyle performance.  A technically difficult choreography set to the “Clash of the Titans” feature film soundtrack finished with passage to a piaffe pirouette on the centerline, followed by another passage to piaffe pirouette, before halting.

“The music is beautiful, very dramatic and powerful, and suits him in the energy that he brings to the arena,” said Marcus, who was only performing the freestyle designed by Nicholas Fyffe for the second time, having ridden it two weeks earlier at CDI-W Saugerties, New York, where he also placed third.  “It is beautifully tailored to his every movement.  I gave away my first-place ribbon because I had mistakes in my changes, which were costly and not typical of Capital.  To still receive a score of 73.50% from the judges, I couldn’t have been happier.”

Marcus continued, “I was really happy with Capital’s performance, especially given that it was a big atmosphere with approximately 5,000 spectators.  The show has more atmosphere than any other show in North America, and competing at night in front of a big crowd under the lights is the closest we could have come in terms of atmosphere since the Olympics.  He was in top form all weekend, and I’ve gained my confidence back in Capital.” 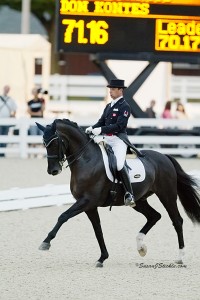 “He didn’t put a foot wrong all weekend; he did the best that he could do at this point in his career,” said Marcus of Don Kontes.  “He did two mistake-free tests, and he tried so hard.  I couldn’t ask for any more from him.  For him to win both grand prix classes in Devon exactly one year after having colic surgery is simply incredible, and combine that with the fact that I was away for two months focusing on the Olympic Games with Capital.  I am really excited about what his potential will be now that I can fully concentrate on his training.”

Owner Deborah Miculinic (nee Kinzinger) of King City, ON, was in attendance in Devon to cheer on Chrevi’s Capital and Don Kontes, who both debuted at the grand prix level earlier this year.  In fact, Don Kontes was originally purchased as a mount for Miculinic, but the partnership that developed between Marcus and the 12-year-old Swedish Warmblood gelding sired by Don Schufro led the pair to the grand prix arena instead.

“Deb is wonderful and it is a pleasure having her at the horse shows,” smiled Marcus, 32.  “She is so excited about all of the success and she makes it more fun for me.  She was ecstatic this weekend, especially for Don Kontes, who was purchased as her own horse.  She is such a huge part of my career, and it is a pleasure to be able to share these moments with her.”

In addition to watching her horses win at the Grand Prix level, Miculinic also watched another one of her horses, VIP, make a clean sweep of the FEI Young Riders’ division with Alexandra Reid of Carlisle, ON.  The pair scored personal bests in all three tests on their way to claiming the championship title, including scoring 73.95% in the Young Riders’ Freestyle for their musical programme, also designed by Nicholas Fyffe.

Another one of Marcus’s students, Ally Dunlop of Burlington, ON, won the FEI Junior Championship title with her horse, Danero.  Like her David Marcus Dressage teammates, Dunlop also enjoyed a personal best in CDI competition, earning 68.694% in the FEI Junior Team test.

“In addition to the success of my own stable, Canada as a whole was great,” noted Marcus, a native of Nebraska who received his Canadian citizenship in 2011.  “A Canadian won the FEI Pony division, Canadians were in the top placings in the small tour, and my London Olympic teammates Jacqueline Brooks and Ashley Holzer both had great performances at the grand prix level.  Devon is a very prestigious show in the United States, and it was exciting to see the potential that Canada has.”

Marcus also enjoyed numerous awards and recognitions at this year’s CDI-W Dressage at Devon.  He was awarded the Watermark Farm Memorial Trophy as the highest-scoring grand prix competitor who had previously competed at the North American Young Riders’ Championship.  Chrevi’s Capital had the highest score in the FEI division to claim the Chigwell Memorial Perpetual Trophy while Don Kontes earned the Major Hector Carmona Memorial Trophy for having the highest average score between the Grand Prix and Grand Prix Special.  Alexandra Reid, who looks after both Chrevi’s Capital and Don Kontes, was awarded the M.L.T. Trophy as the groom of the highest-scoring horse in the FEI divisions, while Marcus claimed yet another ‘best dressed male’ title at the horse inspection.

Contributing to the success of David Marcus Dressage in Devon was Nicholas Fyffe, who also trains and coaches in addition to competing at the grand prix level himself.  Riding Sentimiento I for owner Tamara Gerber, the Australian native placed sixth in the Grand Prix and seventh in the Grand Prix Freestyle with a score of 70.50%.

“Nicholas did a wonderful job of helping me, and made a huge difference in my ride,” said Marcus, whose own trainer, six-time U.S. Olympian Robert Dover, was unable to attend.  “Nicholas also showed in the Grand Prix and the Grand Prix Freestyle, so it was a busy night helping each other.  He overcame some challenges, such as going first in both classes and his music not starting for the Freestyle, to exceed all expectations in only his second CDI appearance.”

Canadian fans will have an opportunity to cheer for Marcus and Chrevi’s Capital when they compete at the Royal Agricultural Winter Fair Invitational in Toronto this November.

“I’m really looking forward to the Royal,” said Marcus, whose long-term goal with Chrevi’s Capital is the 2014 World Equestrian Games in Normandy, France.  “It’s a show I’ve never done before.  It will be great to compete in front of the hometown crowd and have Capital in top form for that.”

Marcus, who owns and operates David Marcus Dressage, a full-service dressage training facility based in Campbellville, ON, will train at home in preparation for the Royal.  Following that, Marcus and several of his students will head south to his winter base in Wellington, Florida. 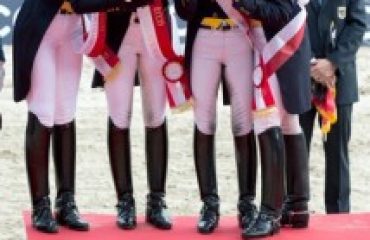