North Salem, NY – May 9, 2013 – The first week of the Old Salem Farm Spring Horse Show runs through Sunday, May 12, and competition today featured the Adult Amateur Hunters. There were two age divisions for the riders, and along with division championships, there was a Grand Adult Amateur Hunter Champion crowned and a $500 Marshall & Sterling Adult Amateur Hunter Qualifier class. Taking home the lionshare of prizes was Katie Robinson of Bronxville, NY, on Sutton Place, owned by KJ Robinson LLC.

On Sunday, May 12, prior to the start of the $50,000 Old Salem Farm Grand Prix presented by Suncast, join us for the “Rolex FEI World Cup Champion Congratulatory Ceremony for Beezie Madden, and Our American Representatives.” Join us in congratulating Beezie Madden and Simon on their historic win! Beezie was the second American in a row to capture the World Cup trophy and only the fifth woman to win in the 35 year history of the championship. 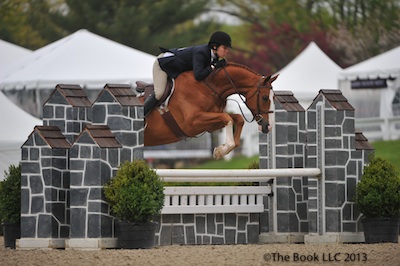 Robinson and Sutton Place topped the Adult Amateur 36 & Over Hunter division, won the Marshall & Sterling Qualifier class with a top score of 172.5, and were named Grand Adult Amateur Hunter Champions. It was an impressive feat for Sutton Place, who is just five years old. Robinson has only been riding him for two months and this was their third show together. In their division, they placed first, first, third, and fourth. The reserve champion was Pembrooke, ridden and owned by Sandra Epstein, and they placed first and second in the division.

In addition to his sweep in the Adult Hunters, Sutton Place, a Hanoverian gelding by Valentino, was the Pre-Green Hunter champion with Brady Mitchell. Despite the short relationship, Robinson says he’s like “a made up little man.” She explained, “It’s kind of funny how fast it came along. When I first rode him back in Florida, I couldn’t ride him and he was all over the place. Brady spent 20 minutes on him and I got back on him and he was a different horse. He’s just really smart and he gets it. He’s a team player. He wants to do well, so it makes it really fun and easy for everybody. It’s good; knock on wood!”

She went on to say, “I think we’re going to have to control ourselves not to push him into the 3’6” because he’s doing it so easy. We’re going to have to take our time and finish out the year, and then next year, start him as a First Year horse. Hopefully we’ll have many more days like today.” 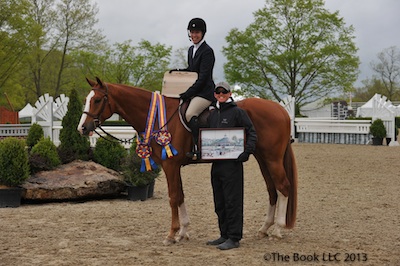 Robinson has come to the Old Salem Farm Spring Horse Shows for five years after showing regularly here as a junior rider. Coming back as an adult rider and with a family, she appreciates the show and its proximity to home. “I love it here because I can drop my kids off at school and then come here and ride. It’s not like I have to leave my life to come and show,” she said. “I can still come and do everything that I’m supposed to do and be a mom, and then come here and have fun.”

In the Adult Amateur 18-35 Hunter division, Stephanie Riggio of New York, NY, won the championship on Compliment, a 15-year-old Oldenburg gelding by Rolls Royce. They received two seconds, two thirds, and a fourth place ribbon. They also placed second in the Marshall & Sterling Qualifier with a score of 169. Kristin Montemarano and Skylar were reserve champions in the division after they placed first, second, third, and fifth.

Jumpers Compete in Power and Speed

The Open Jumper 1.30m Power and Speed class had the largest field of exhibitors in the Annex Ring today with 58 entries. Jumping over Brazilian Guilherme Jorge’s course, the ones who left all the jumps up and were the fastest in the speed phase were Cody Auer of Fairfield, CT, on her horse Timo, a 13-year-old KWPN gelding by Royal Bravour x Joost. They crossed the timers in 27.876 seconds for the win. Just behind them were Chris Kappler and Adriane BB in 28.765 seconds for second place. Third place went to Todd Minikus and Romeo, who finished in 28.849 seconds.

Auer returned to the United States at the beginning of the year after three years working in Holland for top show jumper Leon Thijssen. She and Timo showed in Europe up to the 1.50m level. Now a professional rider and working with her former trainer, Olympic gold medalist Leslie Howard, Auer is happy to take the education she learned in both the U.S. and Europe and use it.

“It was amazing. It’s really different (in Europe), but I learned so much and got to ride a lot of different kinds of horses. It definitely helped (Timo) too. I was exposed to a lot of different riding styles, and you take what you like from each part and bring it together,” she explained. “It’s great for anyone’s riding. I learned a lot there that I can apply to being over here.”

She said of Timo, “It’s a horse I’ve had for a long time. I used to jump 1.50m (classes) on him. Now he’s older and just jumping around the 1.30m and we’re trying to find someone to lease or buy him for a kid to go around and give him some nice retirement years. Yesterday I just went slow because I hadn’t shown him in a long time. Today I thought I might as well go fast, and he loves to go fast. It’s really easy for him.” 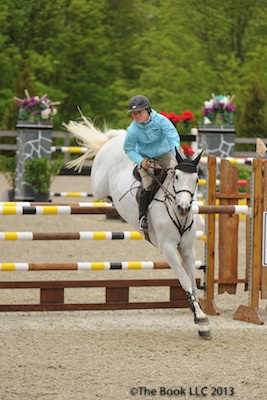 Auer was happy to ride in the Annex Ring and commented, “I actually love the sand ring here; it’s nicer than most rings! A lot of people, when it’s raining and you can’t be on the grass, say it’s so sad, but the sand ring here is beautiful. They’ve done an amazing job.”

Auer can look back and remember her years showing at Old Salem Farm. “I came here with my Small Pony Hunter!” she smiled. “I was in the office the other day and looking at the trophies and I was champion years ago on my Medium Pony Hunter and it’s there. It’s really nice to come back and it’s changed so much since I was here last. It’s amazing. It’s the top facility in this area now, for sure.”

Other jumper winners from today included:

Classes 216, 218, and 215, Small Pony Hunters, will now be held in the Indoor Ring on Saturday, May 11, following the Large Green Pony Hunters

Classes 217 and 218, Small Pony Hunters, will be held in the Indoor Ring on Sunday, May 12, at 8 am as the first two classes and will be followed by Class 551, the $1,000 Pony Hunter Classic sponsored by Gotham North

Class 317, the $5,000 Equitation Classic will run directly following the $5,000 Low Amateur-Owner Jumper Classic on Saturday, May 11 (no exact start time)

Tomorrow’s schedule will include the highlight class of the day, the $25,000 New York Welcome Stake, held at 12 pm on the Grand Prix Field. It is preceded by the Open Jumper 1.30m class and the High Junior/Amateur Jumper 1.40m class in the Annex Ring. The Amateur-Owner Hunters open up their competition, and jumper classes continue for Children’s, Adults, Juniors, and Amateurs.

to watch these three highlight events!

The Old Salem Farm Spring Horse Shows, rated the #11 show in North America by the North American Riders Group, has a full schedule of fun events for exhibitors and spectators. General admission, set at $20 per car on Friday-Sunday, generates proceeds to support the Old Salem Farm Foundation, a 501 (c)(3) not-for-profit organization.

Join us tomorrow for the $1,500 Canine Puissance co-sponsored by Hound Spa at 3:30 pm and the Victoria’s Pizzeria “Make Your Own Pizza” Exhibitor Party from 5-6:30 pm at the Special Events Tent on the side of the Grand Prix Field. You’re also invited to meet Atka, the Ambassador Wolf from the Wolf Conservatory Center of North Salem, at 6 pm in the Grand Prix Field!

The Old Salem Farm Spring Horse Shows celebrate its 31st year in 2013 and offer two weeks of exceptional equestrian sport on May 7-12 and May 14–19 at one of the nation’s premier and newly renovated equestrian facilities, Old Salem Farm, in North Salem, New York. Old Salem’s beautifully manicured grounds, list of elite horses and riders, and fantastic social gatherings draw spectators from Westchester County and beyond to watch horses and ponies of every size compete for almost $500,000 in prize money. The Old Salem Farm Spring Horse Shows feature over 130 hunter and jumper classes each week, bringing together top competitors, including Olympic show jumpers, from across the country. For more information, please visit www.oldsalemfarm.net/mayhome

HOW SWEET IT IS! WHITNEY BOYCE-PETREY PILOTS CANEBRAKE TO FIRST GRAND PRIX WIN IN THE $25,000 DOMINO’S GRAND PRIX