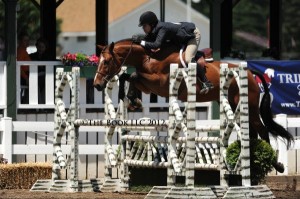 Katie Robinson and Rock Steady won the Amateur-Owner 36 & Over Hunter Championship at the Lake Placid Horse Show. (Photo by Parker/Russell – The Book, LLC.)

Katie Robinson and her long time mount Rock Steady were in top form during the first week of the Lake Placid Horse Show. The pair claimed two first place ribbons, as well as a second place ribbon. Their efforts were rewarded with the Amateur-Owner 36 &Over Hunter Championship.

“It was a really great week,” smiled Katie. “The weather was perfect and the courses were nice. Rock Steady was really good as usual, especially in the handy. It was really fun to be able to rely on him. He is kind of my steady guy. I just love riding him.”

Katie’s success did not end there. She also claimed the Amateur-Owner 36 &Over Hunter Reserve Championship with her newest mount Lordanos. They also picked up two first place ribbons and a second place ribbon for their excellent performance in the ring. During the second week Katie and Lordanos continued to showcase their skills, taking home a blue and red ribbon in the division.

“This was only our third horse show together, but Lordanos is really special and I am really looking forward to getting to know him better,” noted Katie. “The courses rode forward, so there was a lot of galloping, which is great for him.”

Katie’s daughter Maggie had her own success in the Small/Medium Children’s Pony Hunters. During the first week, Maggie and Carebear placed first and third, and during the second week they also earned a blue ribbon prize. Aboard Dawn’s Early Light, Maggie had great second week, earning a first place ribbon and three third place ribbons. Their efforts were honors with the division’s reserve championship tricolor.

“Maggie was great,” smiled Katie. “She got to show in every ring, so she had a great time. I’ve had Dawn’s Early Light for a long time for my older girls. It was really fun to watch Maggie have the chance to ride her and be so successful. Dawn is still a really great pony.”

Deeridge Farm will now travel to Traverse City for Horse Shows By the Bay, before returning to New York for the Hampton Classic at the end of August. 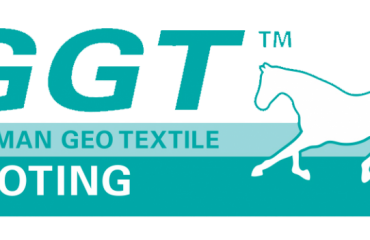 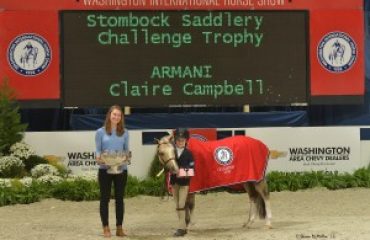 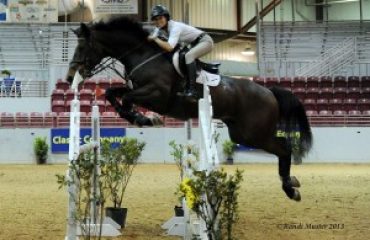