Halifax, MA – August 22, 2013 – The beautiful New England weather continued as competition in the Junior and Amateur-Owner Hunters concluded during the Fieldstone Summer Showcase II. Lisa Foster and Castlewood proved that they had all the answers in the Amateur-Owner Hunters, winning both over fences classes for the championship award. McKayla Langmeier and Czar-Z were also victorious in both of their over fences classes to take home the Junior Hunter Championship. The day wrapped up with the $1,000 Junior/Amateur-Owner Hunter Classic, where the winning honors went to Michael Renker and Wicked.

Although Renker, of North Hampton, MA, and Wicked entered the $1,000 Junior/Amateur-Owner Hunter Classic with a score of 77 for the first round, they were on point during the second round. They laid down a flawless trip, easily flowing to each fence, which earned a score of 83 for a 160 total, good enough to capture the winning honors. 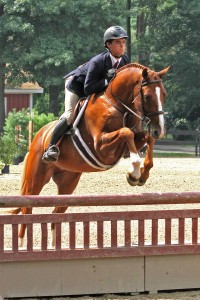 “Wicked has been really good the last two days,” noted Renker. “The first round I made a mistake and we were a little long, but the second round we really tried to make up for it, and he felt really good.”

Renker continued, “You just have to be really calm on him because he does the job really well. He’s a really good boy; you just have to be confident. He used to do the equitation, but we just started brining him to the hunter ring because we thought that would suit him better. The equitation taught him a lot though, it really helps in the handy rounds.”

Tomorrow, Renker and Wicked will compete in the $25,000 NEHJA $25,000 3’3” Hunter Derby Finals. “Everything is so pretty here,” he said. “The field is great. We are going to the Derby tomorrow, which will be really fun.”

Lauren Henry of North Kingston, RI, did not leave Renker much room for error. She piloted Esteban La Paz to consistent scores of 79 and 80, for a total of 159 and the second place award. Alexandra Indeglia of North Kingstown, RI rounded out the top three’s very close scores aboard Bravo Van De Kwakkelhoek. The duo earned an 81 and a 77 for a total of 158.

The Amateur-Owner Hunters were the first to compete in the Main Hunter Ring, where Castlewood and Lisa Foster of Dover, MA, dominated the competition, winning both over fences classes today after a blue ribbon in the under saddle yesterday. Their top ribbons helped them earn the division’s championship prize, while Jean Sheptoff of Waltham, MA, and Alavanta picked up the reserve championship.

“He did everything I asked him to do,” smiled Foster. “Today, I was a little concerned that he might be tired, but he felt even better than yesterday. I’ve had him since he was 3 years old and he’s 13 now, so we’ve developed a solid partnership over the years.”

Foster added, “He doesn’t really need to practice much anymore. He doesn’t have to work very hard; we just save him for the shows. We have a couple shows left and then Indoors, and then he will get a break before Florida.” 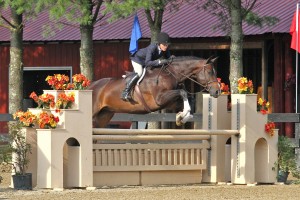 Foster is leaving for vacation today, but wanted to make sure she showed at the Fieldstone Summer Showcase before she left. “I love all of the improvements that they have done here,” she explained. “I really appreciate the efforts that Michael Morrissey and Scott Clawson make. It’s very exhibitor friendly and it’s a beautiful facility. I always look forward to coming here.”

In the Junior Hunters, it was McKayla Langmeier of East Granby, CT, and Czar-Z who stood at the top of the leader board. Czar-Z’s beautiful jump and smooth canter helped the duo win both of today’s over fences classes, as well as a first place ribbon and two second place ribbons yesterday. Their efforts earned the division’s championship title, while a win in yesterday’s under saddle and two second place ribbons over fences helped Jillian Schelzi of Lynnfield, MA, and Pocket of Wonder garner the reserve championship.

“Czar-Z was really good,” smiled Langmeier. “We just arrived yesterday, but I’ve had him for almost five years and we have a really good partnership. I just float the reins and go. He’s very straightforward.”

The $10,000 NEHJ 2’9” Hunter Derby Finals and the $25,000 NEHJA $25,000 3’3” Hunter Derby Finals will get underway tomorrow morning in the Derby Field at 9:00 a.m. These highlight events will feature the country’s top horse and rider combinations vying for the winning honors at the Fieldstone Summer Showcase II. 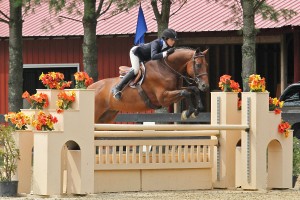 For more information about the Fieldstone Summer Showcase, please visitwww.showfieldstone.com.