Lexington, KY – August 18, 2013 – Pablo Barrios and Zara Leandra returned to the Rolex Stadium with a vengeance after a close second place finish in Friday’s $25,000 Hagyard Lexington Classic. They edged out Kristen VanderVeen and Bull Run’s Eternal by less than .2 seconds in the jump-off to claim the title in today’s $40,000 Bluegrass Festival Grand Prix, sponsored by Audi of Lexington. 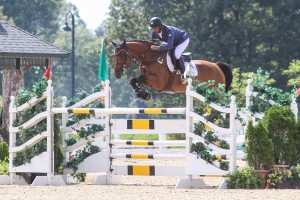 Eight riders from the field of 31 starters advanced to the jump-off after clear trips over the first round course set by Allen Rheinheimer. The time allowed for the first course was 92 seconds, with most competitors finishing well within that. The course included a liverpool-liverpool combination, an oxer-oxer combination, and an oxer-vertical combination.

“The course was very fair for the group of riders,” Barrios said. “Again, like Thursday, it was a mixed group – amateurs, juniors, and professionals. I think [Rheinheimer] did a great job.”

For the jump-off, riders began over the same first fence, rolled back to an oxer, returned to the first fence of the liverpool combination, jumped the oxer-vertical combination and continued down the line to the final oxer of the first round course. They finished over two new fences, a vertical and an oxer heading back toward the in-gate.

VanderVeen and Bull Run’s Eternal, owned by Bull Run Jumpers One LLC of St. Charles, IL, were the first to tackle the jump-off course, putting them in a challenging position with several quick riders coming after them. They executed the course cleanly in a time of 37.175 seconds. 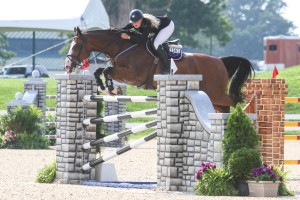 “I actually enjoy going at the beginning, though not necessarily first,” VanderVeen said. “I like to have my own plan and stick to it. I find that if I watch too many, I start to change my plan, and it always gets me at the end. So I don’t mind going first, but it was a bit of a hard jump-off. There were some really fast ones behind me. I knew that I needed to definitely lay down a fast round. I tried to take as many comfortable risks as I felt I could without compromising and having one down.”

Like Barrios, VanderVeen had been in the running for a top placing in Friday’s $25,000 Hagyard Lexington Classic, but she and Bull Run’s Eternal fell a few seconds short of the leaders and wound up in ninth. Today, she was determined to put herself in contention for the win.

“I thought I was quick in the jump-off on Friday, and it was shocking to me that they were three seconds faster,” she said. “That did have a bit of an effect on how aggressive I wanted to be in the jump-off today. I didn’t want to be double clean and slow and in fifth or sixth place. I really wanted to be in the top three. So I definitely pushed it.”

Following a four-fault effort from Ali Wolff and Zidane, the third place finishers in the Hagyard Lexington Classic on Friday, Barrios and Zara Leandra entered the ring. Barrios had watched VanderVeen’s round to see where he might be able to make up some ground. Although he took a similar track most of the way around the course, he was able to leave out a stride between two jumps to shave off a little time. 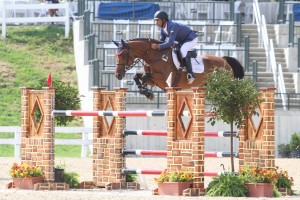 He and Zara Leandra completed the course in 37.024 seconds to take over the lead, and none of the final five riders were able to match his time. Kaitlin Campbell and Rocky W made the best attempt, finishing in 37.543 seconds to take third.

Barrios said he enjoyed the jump-off course. “It had more options than Friday’s class for galloping and turning,” he explained. “I think it was a great course.”

He and Zara Leandra, owned by ZL Group, Inc., of Wellington, FL, have had a very successful run on the Kentucky circuit, racking up wins throughout the summer. Their strong results have helped Barrios lead the Hagyard Challenge Series standings by an impressive margin.

“She’s going to have a little rest and then we’re going to do some indoors,” Barrios said. “Then she’s going to rest in December and January. I think I’m going to start her in the middle of WEF, maybe Week 5 or 6. She has done a lot this year, and she still has a little more to do this year.”

“She’s only 9,” he added. “She’s really fast now in the jump-off, and she’s looking for the next jump, which she just learned to do not too long ago. Now she’s just right on it in the jump-off. I think that’s a big difference. To be honest, her jump is always much better in the jump-off – she likes to go a little fast.”

“I want to thank all my team for all they have done this summer,” Barrios concluded. “They are a big part of all the success that we have.” 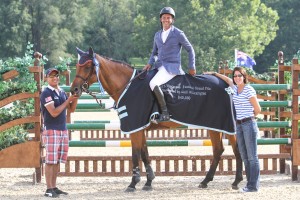 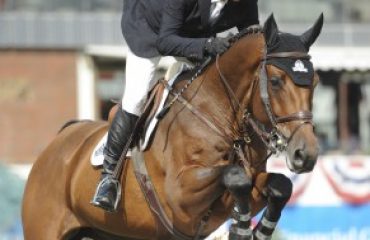 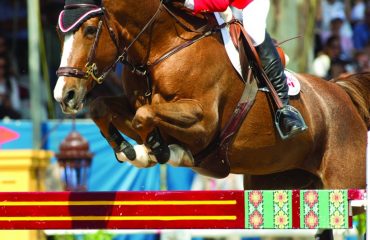 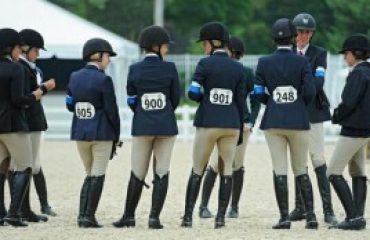