Halifax, MA – August 24, 2013 – The Adult Hunters took center stage today in the Main Hunter Ring as the Fieldstone Summer Showcase II came to a close this weekend. Laurie Barna led the way by capturing both the championship and reserve championship honors in the Adult Amateur 36 & Over Hunters with Laguna and Tycoon, respectively. Rebecca Clawson and her young mount Freeport topped the Adult Amateur 18-35 Hunters for the championship prize. The day wrapped up with the $1,000 WIHS/NAL Adult Hunter Classic, where the winning honors went to Kelly Lively and Tarzan, who earned scores of 83.5 and 85. 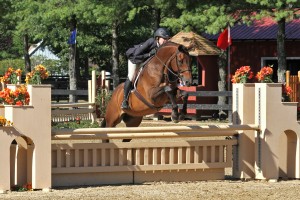 Lively and Tarzan, owned by Betty Oare of Warrenton, VA, were ranked third coming into today’s $1,000 WIHS/NAL Adult Hunter Classic with a score of 83.5. They returned for the second round with a commanding presence, and flowed easily through the course, jumping each fence in perfect form. When the pair exited the ring they were rewarded with a score of 85 for a two round total of 168.5 to claim the victory.

“This is my first show with Tarzan,” explained Lively. “He’s a really good boy. I’ve just been trying to figure him out, but he was awesome and went right around for me. Every round is a new round with him because I don’t know him that well, and he was perfect when we came back today.”

Lively trains with the winner of yesterday’s $15,000 NEHJA 3’3″ Hunter Derby Finals victor David Oliynyk, and will now travel to HITS-on-the-Hudson for two weeks, but she’s had a wonderful show at Fieldstone. “They’ve really done a great job, especially in the last few years,” she commented. “It attracts great competition and the courses are always beautiful.”

Lively’s victory in the Classic came shortly after earning the Adult Amateur 18-35 Hunter Reserve Championship with Tarzan earlier today, winning the first over fences class. The division’s championship award went to Rebecca Clawson of Halifax, MA, and Freeport, who won the second over fences class today, as well as placing first and second yesterday. 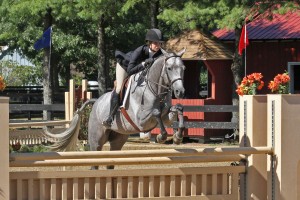 “Freeport has been so good,” smiled Clawson. “He is kind of tired because this is his second week of showing, but he’s jumping really well and making everything look so smooth.”

Clawson placed fifth in yesterday’s $10,000 NEHJ 2’9″ Hunter Derby Finals, and added, “He’s only 5 years old. He’s grown up a lot this summer, so I am really happy with him. He’s very brave, and he doesn’t spook at all. He likes a soft ride. You need to help him a little bit, but he likes to do his own thing.”

Barna and Laguna were the winners of today’s second class in the Adult Amateur 36 & Over Hunters, and combined with a win yesterday they took home the division’s championship prize. Barna’s second mount Tycoon was also victorious yesterday, and picked up the reserve championship award.

“I am really excited,” expressed Barna. “This is the second time this season that this has happened, and it’s very exciting because I am just starting out with Tycoon, and Laguna is a long-time partner.”

Barna continued, “They are both good, seasoned horses, but they are very different. Tycoon is lazy and you really have to push him to go along, but Laguna helps you out every way that he can. Tycoon takes a little more effort to get around, and we are still figuring each other out. Laguna has been a family heirloom. He was passed down from my cousin, and I’ve been riding him for about four years now. They are very different horses but they are both great in their own way.”

This is Barna’s first time competing at the Fieldstone Summer Showcase, and she has enjoyed being at the New England facility. “I love the fact that it’s like a little horse park,” she commented. “It feels very cozy and it’s very beautiful here.” 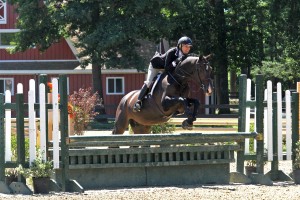 Today marked the conclusion of the Fieldstone Summer Showcase II, but competition will continue tomorrow at the Fieldstone Showpark at the 2013 Massachusetts Hunter Jumper Finals take place. Qualified riders will compete for the championship title in their respective divisions.

For more information about the Fieldstone Showpark, please visit www.showfieldstone.com. 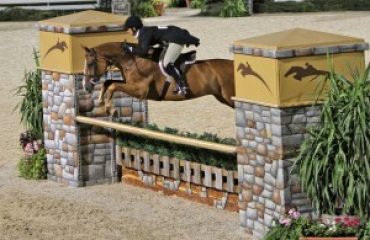 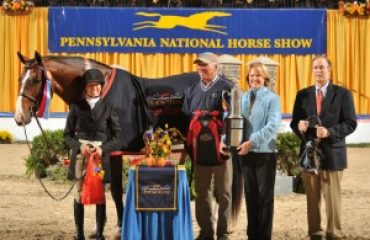 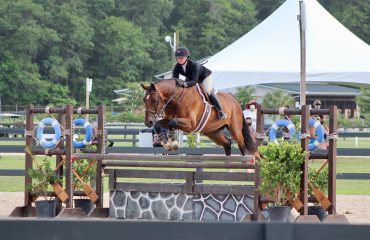