SPRUCE MEADOWS, Calgary, AB): The ‘North American’ Tournament continued today, and it was Reed Kessler (USA) and Wolf S who took the highlight victory of the day in the $50,000 Lafarge Cup 1.50m over Lauren Tisbo (USA) with Catharina 9. Frances Land (USA) and Vieanne were very fast to win the $33,000 Pepsi Challenge 1.45m as the first ones in the jump-off.

Watch a video of highlights from Friday’s competition at the ‘North American’!

The $50,000 Lafarge Cup 1.50m started out in darkening skies and continued in driving rain, but the course set by Anthony D’Ambrosio of New York looked to be more of an obstacle. Only two of the 24 entries were clear, and it was deja vu all over again as Reed Kessler and Lauren Tisbo, the two riders from yesterday’s jump-off in the $35,000 PwC Cup 1.60m, went against each other in today’s final competition. However, this time it was on their newer mounts.

Kessler noted, “I love Anthony’s courses. He’s my favorite course designer. It’s all very smooth, but technical. There wasn’t really any moment that was a freebie. I was expecting more (in the jump-off), but then the weather really turned and it was quite dark.”

Kessler and Wolf S, a 10-year-old Warmblood gelding by Numero Uno x Peter Pan owned by Iron Works Partners, drew the unenviable first position in the jump-off again. Kessler was riding for that all-important clear round and she did just that, finishing in 37.08 seconds.

Tisbo and Catharina 9, a nine-year-old Mecklenburg mare by Cellestial x Monsum owned by Tequestrian Farms LLC, were next in. They pulled a rail at jump 10b for four faults in 38.05 seconds and the runner-up place.

Kessler had yesterday’s second-place finish in her mind as she entered today’s jump-off. “I made that mistake yesterday. I was fast and had an unlucky rail at the first fence. I didn’t want to outsmart myself and go blazing and risk having a rail,” she recalled. “I’ve spent a lot of time working on control with him and haven’t stepped into that next phase yet of speed. That’s totally the next phase still. I tried to be fast where I knew I could be quick, the first few jumps, and doing eight (strides) into the combination, and then bringing it home clear at the end of the course. Lauren is also on a new horse. It’s a fantastic horse and another star in the making. But we were kind of in the same boat, wagering how fast exactly we had to go.”

Third place went to Darragh Kerins (IRL) on E Muze Yek. They had one time fault in the first round in 76.77 seconds.

After eight second place finishes during the Spruce Meadows Summer Tournaments, it was a “relief,” for Kessler, who turns 19 next week, to score her first victory. “All of my horses have been jumping so well. I’ve been pretty consistent. You can’t complain too much, being second is great. But eventually it’s a hair disheartening that you can’t win one!” she remarked. “I was trying to be a good sport about it, but I’m a competitor and I’ve been competitive since I was a little child on ponies. It was really exciting, especially because he’s a new horse for me.”

Another new experience for Kessler was winning on a horse owned by a syndicate, Iron Works Partners. “It’s my first syndicate of owners, besides my parents, with Clifford Press and Gary Bisantz. I’m thrilled that I could deliver their first win,” she said.

Kessler started riding Wolf S in January and credited his “immaculate front end.” She added, “He likes to be very close to the jump, closer than any of my other horses. It’s sort of surprising how well he jumps from there. He’s got a lot of personality. When I first got him, it was kind of in a negative way. He’s a fighter and if I can get him to fight for me, that’s when he goes best. If I can place him where he wants to be, there’s nothing he can’t jump.”

Kessler called Wolf S “a star” and said while they have been working on his tricky mouth, she feels that today’s performance shows his potential. “This is the best he’s been over this technical of a track and this tight of a time allowed, so I’m thrilled with him,” she expressed.

Out of a starting field of 77 entries, 11 went to the jump-off, but no one was able to catch Frances Land (USA) and Vieanne. They blazed around the shortened course in 37.99 seconds for victory.

Land was only thinking speed when she entered the ring for the jump-off. “A class like this you have Eric Lamaze, you have Kent Farrington, you have Charlie Jayne, you have Reed Kessler, you have everyone who has ever been fast in the entire world, so you have to kind of go for it,” she exclaimed. “There were only 11 clean, so my dad told me to just go in there – and she is so fast naturally – (and) to leave out strides, make quick turns, and she will be fast and hopefully it will hold up. I think I went a little crazier than I was supposed to, but it worked, so today it was a good thing.”

Land said she was surprised that her time held up in the jump-off. “Whenever (you) think (you) go fast, then you have Eric [Lamaze] who beats you and makes you look like you went very slow. But my horse is just so naturally fast that turning quickly and opening her up and using her big stride really helped me out. It was definitely a surprise. I thought someone would catch me,” she admitted.

The next closest was Reed Kessler (USA) in another second place finish, this time with Ligist. They were clear in 38.20 seconds. Third place went to Christine McCrea (USA) and Ronaldo de la Pomme, who were last in the jump-off. They stopped the timers just short in 39.73 seconds.

Nineteen-year-old Land has been riding Vieanne, an 11-year-old Dutch Warmblood mare by Andiamo x Voltaire, since this past January. Vieanne was showing in the 1.50m division in Europe with a professional rider and is a speed expert.

Land noted that Vieanne is “very careful,” and that it took time for her to get used to her since she is bigger than other horses that she has ridden. “She is a lot of horse; she is a lot to contain. For me getting used to that big stride on a big field like that, (it was) just opening her up and then trusting the scope. She is amazing on grass and she loves this footing,” she remarked.

Although Land has won classes at Spruce Meadows before (in fact, she won the $20,000 Clark Builders Junior/Amateur Grand Prix 1.40M with Merlin earlier today), this was her first win in the International Ring. She was also excited to represent the United States and hear the national anthem play after her victory. “It is surreal to be able to say that you won in a ring that Eric Lamaze and everyone that has won an Olympic medal has shown,” she expressed. “I love being able to ride for my country. I don’t really get to show in Europe, so this is my international experience. Getting to be a U.S. rider outside the U.S. is definitely a proud moment because you get to represent your country. It is definitely special.”

Horses are a family affair for the Lands. Her father Jay is her trainer and her mother Kim is a rider, as is her sister Taylor. “I heard them announce (that I won) and then my dad came running down with the cooler. He trains me, so it is nice to be able to share victories with him. It makes it a little bit more special because he is a rider too, so he understands. They are all here, so we do it together,” she said.

The Zoetis Horse Health Championship, presented by Pfizer Equine Division and Moore Equine Veterinary Clinic, was awarded today to the horse/rider combination who accumulated the most points throughout the 1.45m Derby Series. The winner was Conor Swail of Ireland on Martha Louise, owned by Susan and Ariel Grange. They finished with 365 points over Jonathan McCrea (USA) and Candy Tribble’s Twisther, who had 270 points. Third place went to Leslie Howard (USA) and Lennox Lewis 2, owned by Peter Howard, who had 263 points. 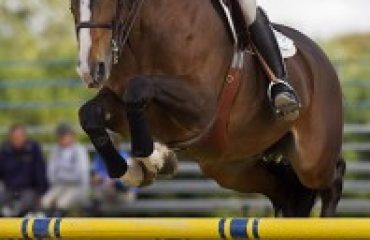 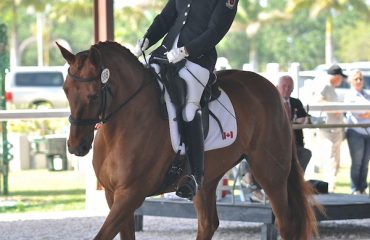 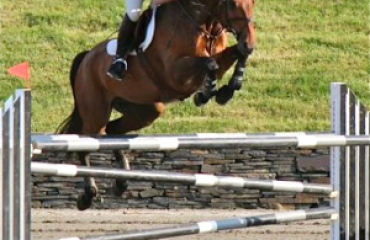