It’s been a busy month for Liz Halliday and Chailey Stud Equestrian Centre as the Eventing season hits full swing.

The professional dual sportswoman, who combines her equestrian activities with a sportscar racing career, has primarily focused on four-legged endeavours in recent weeks, recording strong results as well as enjoying encouraging performances from a number of horses.

Early May saw Halliday travel to Northamptonshire for Aston-le-Walls where Oscar (Viscount Oscar) competed in his first Intermediate event of the year, producing an excellent Cross Country performance, while Trevor (Endymion Entrechat) also showed his growing confidence at the level.

Meanwhile, Fox (Red Letter Day II) had his first run of 2013, competing HC (non-competitive) but nevertheless enjoying a lovely double clear, while Blackie (Fernhill By Night) placed seventh in the Open Intermediate section with a superb double clear in what was a highly competitive class. Also taking part was Benny (Benaughlin Little Hero) who went double clear in the Novice section and completed a positive weekend for all.

The next encouraging outing came at Tweseldown, where Trevor impressed in the Intermediate Novice section with a score of 30 in the Dressage and just one fence down in Show Jumping. A strong Cross Country round completed exactly on the optimum time was to follow, which helped the pair finish in an impressive sixth place. Meanwhile, Oscar delivered his best Intermediate showing to date with a score of 30 in the Dressage and one unfortunate fence down on what was a very large and challenging Show Jumping track. However he demonstrated why Cross Country is his best phase with a brave and confident clear round, helping him secure an eventual eighth-place finish.

Courage (Cooley Master Courage) enjoyed a first run out of the year last Monday (27 May), competing in his maiden BE 100 event. A 29 Dressage, one down in the Show Jumping and a confident clear Cross Country helped him to finish 11th, a hugely pleasing result for Liz and the team given his inexperience. He has since enjoyed a further run out at Little Downham, again going clear on Cross Country, and continues to display his potential for the future.

Little Downham also saw Fox produce one of his best Advanced level performances, proving particularly impressive in the jumping phases. Despite the Cross Country being set next to the Show Jumping ring, which would normally prove very distracting, he was able to remain focussed and jump well with just one pole rolled. A classy Cross Country display was to follow where Fox’s many years of experience really shone through as he and Liz enjoyed a foot-perfect clear round.

With barely time to catch her breath, Liz will now travel to the Netherlands for the Rabo Renswoude International Horse Trials where she will be competing with Blackie in the CCI**, Oscar in the CIC**, and Courage in the Young Horse 6-Year-Old class.

Liz Halliday: “The past few weeks have been frantic with several horses competing at a lot of events. There have been some great results and, what’s more pleasing, some awesome performances. In particular, it was great to have Fox showing that he has still got it with great rounds at both Tweseldown and Little Downham, and super to be getting some good results and experience for the horses that recently moved up a level.

“Overall it’s good that we’re so busy and to hopefully be approaching a successful summer of eventing. Now we’re heading to Rabo Renswoude and will look to return home with some more great stories and results to talk about!” 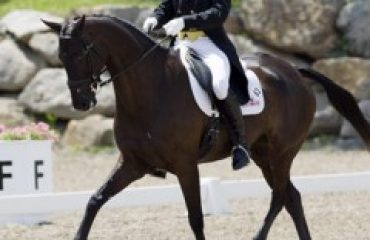 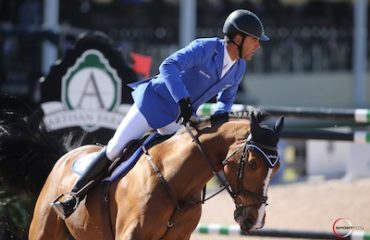