Calgary, AB – June 27, 2013 – The Spruce Meadows Summer Tournaments are in their third week and the competition is as tough as ever. Two FEI-level events were held today at the ‘Canada One’ Tournament, which runs through Sunday, June 30. Olympic gold medalist McLain Ward and Wannahave sped to their second win in the summer series in the $33,000 AKITA Drilling Cup 1.45m. Ward won his sixth FEI competition of the Summer Tournaments in the $33,000 Cargill Cup 1.50m with Zander.

The tournament wraps up on Sunday with the $100,000 Esso Challenge, the third FEI World Cup qualifier to be held at Spruce Meadows this summer. Admission and parking are complimentary for the ‘Canada One’ Tournament.

The $33,000 Cargill Cup 1.50m had 55 entries, and 19 of those were were clear rounds, but in the speed format of the competition, it was all about who was fastest over the course set by Michel Vaillancourt of Canada. Today, that was McLain Ward on Zander, a nine-year-old Dutch Warmblood gelding by Cantos x Saygon that Ward owns with Grand Road Partners. They finished in 66.114 seconds. Reed Kessler (USA) and Ligist were just behind in second place in a time of 66.790 seconds. Tiffany Foster (CAN) and Victor placed third after they stopped the timers in 67.559 seconds. 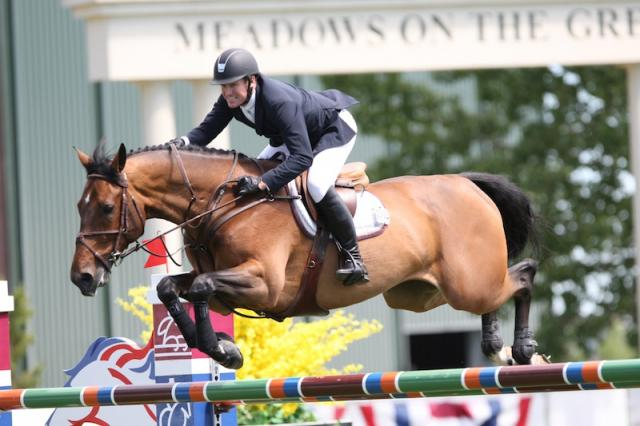 Ward said of his ride, “Zander’s really coming along well. I didn’t want to run him off his feet today. He has a really big stride and it was a course where a big stride could come in handy in a lot of the lines. He’s getting so seasoned now at this level of jumping that you can take some nice cuts. Early on, with the wall being a bit funny, and the line to the skinny (fence), I could take a hard cut on it and I knew he was going to respond well. I was actually a little surprised the time held up, but sometimes you get lucky.”

Ward also placed seventh with Cadence, a new ride for him owned by Procedures Inc. Cadence was previously ridden by Megan Wexler in the grand prix ring. Ward rode Cadence for the first time yesterday and this was their first competition together. “His owner is pregnant, so she asked me to show him. He’s a seasoned grand prix horse and he’s a nice addition to the string,” he said.

With his two victories today, Ward will gain FEI World ranking points. Many FEI competitions are on the schedule at Spruce Meadows, and it gives riders a great opportunity to increase their standing. While Ward said that the world ranking system is suited to the European style of show jumping, it is great to have as many FEI competitions as there are in the Summer Tournaments, “particularly here in North America where we’re a little bit isolated from the European scene.”

He added, “I’m a professional who just can’t pick up my business and spend the year in Europe. I try to find a balance and I want to stay current in the sport. I try to go to Europe enough to know where I’m at against the best in the world. If I do go to Europe, I usually can only take two horses, and if one gets a little tired or injured, you don’t have the luxuries that they have while showing on the continent or we do when competing here at Spruce Meadows or Florida. To have this opportunity, to do this in the same fashion as the Europeans do, it’s a great asset.” 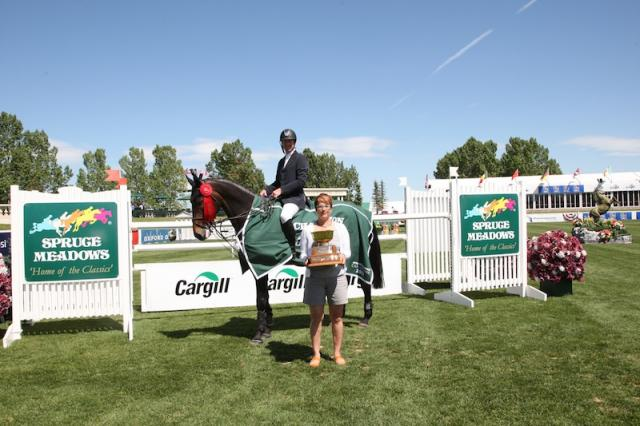 With the devastating flooding in Calgary and the local communities, Ward commented, “It’s a tragedy, and you hear about things more and more with mass media. It was lucky that the weather didn’t affect Spruce Meadows. I’m a big believer that it’s great for things to go forward. It’s terrible when you have a tragedy, whether it be a natural disaster or a death, but you have to continue forward with life the best you can. Whether it’s Spruce Meadows or other public events, I think it’s good for morale to feel like life is normal, as much as possible.”

Ward and Wannahave Are Tops Again

Showing that the derby obstacles are no match for them, McLain Ward and Wannahave, a 10-year-old Dutch Warmblood gelding by Manhattan x G. Ramiro Z owned by The Wannahave Group, sped to victory in the $33,000 AKITA Drilling Cup 1.45m over 61 other entries. Ward and Wannahave took all of the natural obstacles in galloping stride to finish clear in 61.490 seconds for the win.

The course in the All Canada Ring was designed by Anthony D’Ambrosio of the United States. There were 25 clear rounds in the competition. Second place went to Wilton Porter (USA) on RadioCity in 61.568 seconds, while Leslie Howard was third with a time of 62.465 seconds on Lennox Lewis 2.

The AKITA Drilling Cup 1.45m was another in a series of competitions at the Spruce Meadows Summer Tournaments that offered the natural derby obstacles in an effort to promote the derby style. Ward appreciates these opportunities.

“They have a series of these derbies, which are nice. Wannahave started out the Spruce Meadows tour a little bit not understanding the derby, and he’s gotten progressively better,” Ward noted. “He won in the second week and then today, so he’s really comfortable with the natural obstacles. That right there makes you faster because you can take a little bit more of a risk to them, as far as angles and leaving out strides. Now that I trust him with that stuff, I can just let his stride carry him and in these big fields, it makes him quite quick.” 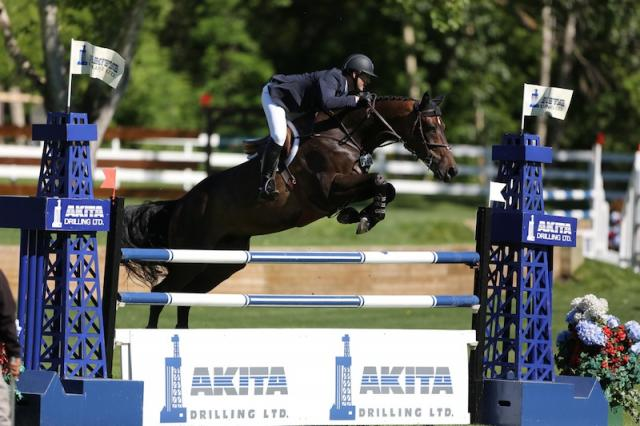 Ward said that Wannahave is “jumping better and better” and they plan to show in Saturday’s $25,000 Direct Energy Derby 1.45m and is aiming toward the $140,000 Cenovus Energy Classic Derby during the ‘North American’ Tournament

Having been a regular competitor at the Spruce Meadows Summer Tournament in the past and for the last three years, Ward has had a lot of success. “Last year didn’t win as much, trying to make the Olympic team and being injured; there was a lot on our plate. We have a good string of horses and it’s nice to pick up a few classes,” Ward acknowledged. “The horses across the board are handling it well, and my student Katie Dinan is doing great, which is exciting.”

With more entries than ever, the Spruce Meadows Summer Tournaments are extremely competitive, Ward said. “I think the level in the last three years has gone up a lot. There were always some good people here and it was always hard to win a class in the summer. But to get good ribbons, you could have a normal round and get a piece. That’s not the case right now,” he pointed out. “These classes are fast, there are lots of clear rounds, and they’re difficult. I think the level is quite good and for the next group down, for horses or riders, I think it’s a great education. You definitely have to be on your game to win here.” 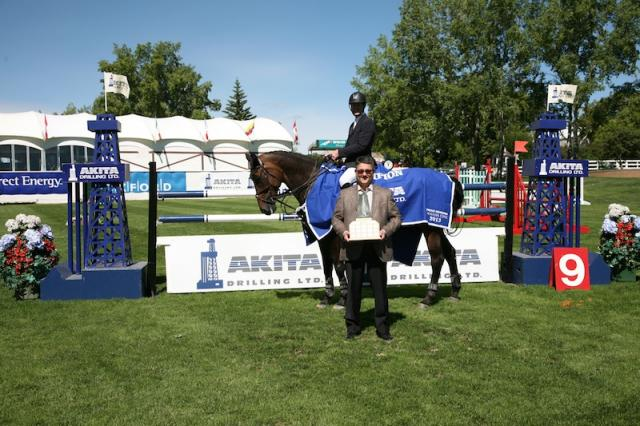 The ‘Canada One’ Tournament continues tomorrow with the $33,000 WestJet Cup 1.45m and the $33,000 Duncan Ross Cup 1.50m in Meadows on the Green. For full results and more information, please visit www.sprucemeadows.com. 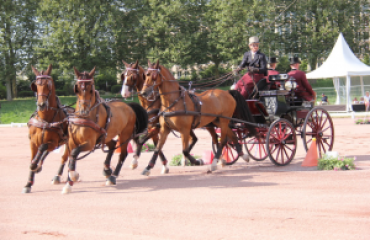 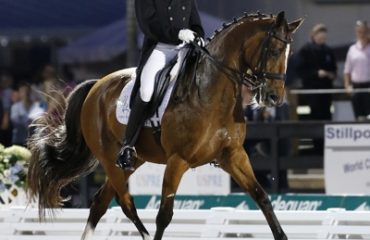