Karen Cudmore: Happy in the Heartland

Karen and Ceonto at the $130,000 Burlington Capital-Omaha Grand Prix at The International Omaha show at the CenturyLink Center.
Photo by Allen MacMillan/MacMillan Photography

Home is where the heart is, and for professional jumper rider Karen Cudmore, where the horses are too. Karen has found success and happiness in basing her family’s Heartland Farms operation out of the centrally-located, easygoing Midwestern city of Omaha, Nebraska. A native of Canada, her journey to the heartland was a long one. She started riding as she grew up in Western Canada and worked her way east to Toronto, then moved on to several U.S. western states before putting down roots in Omaha.

A winner of many grand prix classes, Karen has represented Canada on a number of international teams over the years. Aboard the Holsteiner stallion Conejo (Calando I – Mephisto), one of her farm’s flagship stallions purchased as a 2-year-old from comedienne Joan Rivers, she competed in the 2002 FEI World Equestrian Games in Jerez, Spain; the 2003 FEI World Cup Finals in Las Vegas; and the 2003 Pan American Games in the Dominican Republic. With Southern Pride (South Pacific – Carentio), a Holsteiner stallion bred by The Oaks in California, Karen was an alternate for the Canadian team at the 2007 Pan American Games in Rio de Janeiro. In 2010, the pair represented Canada in the Nations Cup in Belgium and in the Rolex World Cup Finals in Geneva.

Karen, 57, whose maiden name is Olson, said she has always loved horses and as a child would often ride her bike to a stable near her home. She grew up in Victoria, British Columbia, where her family owned the historic Strathcona Hotel. As a complement to the hotel business, her uncle also owned a horse-drawn carriage company called Tally Ho Carriages, and tourists from the hotel would book rides with Tally Ho. “With leasing property to maintain those carriage horses, my uncle always threw a couple of ponies on the property. Eventually he said to me, ‘Why don’t you just try this pony for a few months?’ I don’t think they were even broke,” she laughed. “I was like, ‘Gee Uncle, how do you put a leg on these things?’ But that’s how I started.”

Contrary to the path that many riders take to become a professional trainer, Karen did not come up through the junior equitation circuit. Instead, she worked for a long list of respected horsemen and horsewomen, taking away the best each had to teach her. By the time Karen was 16 years old, she was working in Victoria for top Canadian equestrienne Bo Mearns, who still holds the Canadian high jump record of 7 feet 2 inches. “I was like, ‘This is the only person who actually looks like she knows what she’s doing.’ I didn’t really know what I was doing then. I don’t think I jumped my first A show until I was 18. Bo’s the one who encouraged me to go out and work for a different person every year and learn something. And that’s what I did. It was a little bit cut short in some places where I should have maybe stayed, but I thought, ‘How I am I going to get the experience from all of these riders if I don’t keep moving?’”

Working stints for Albert Kley at Spruce Meadows and Danny Foster (show jumping individual gold medal winner at the 1991 Pan Am Games in Cuba) helped shape who Karen is today as a rider and trainer. She was also influenced by Canadian Team riders Michel Vaillancourt and John Anderson while at their stables. Then, while competing at the Royal Winter Fair in Toronto, Karen met U.S. trainer Linda Allen and went to work for her.

Connections she made through Linda landed Karen a job in California working for horse owners from Hong Kong. Working in the same area was her future husband, Blair Cudmore, who’d grown up in Saskatchewan, Canada. “He lived just down the street working with Arsia Ardalan. They imported a lot of European horses and did a lot of work with Joan Irvine Smith at The Oaks in San Juan Capistrano.”

As Karen and Blair got to know one another, they realized that they wanted to start a business together and decided to move to the Midwest. They spent time in Colorado and Iowa before settling in Nebraska. She explained their thinking as they searched for the best location for a growing show, sales and horse breeding business: “We said, ‘OK, look, if we want to start our own thing, we should move to the Midwest,’ where his family already had an established business. It was just a little more affordable in the Midwest for young and up-and-coming kids, which we were. We weren’t married at the time. We had a couple of good young horses that were almost ready to step into the grand prix. So, we embarked in this business together and we got married a few years later. Now we have two kids and we’ve been married for 30 years.”

The Cudmore family, left to right:  Kiley, Blair, Karen and Brooke with some of Heartland Farms’ dogs
Photo courtesy of The International Omaha

The Cudmores have two daughters, Brooke, 23, and Kiley, 21. Brooke and Karen are the full-time riders and trainers for the farm. Kiley is a yoga instructor, but also helps at Heartland by riding the older stallions and some of the young horses. Blair keeps everything going on all of the properties and manages the breeding operation.

Their breeding program is based on producing Holsteiner and Holsteiner-Thoroughbred cross horses. Besides Conejo (who is deceased, but they still have frozen semen from him) and Southern Pride, the stallion Ocelot, who is by The Oaks stallion South Pacific and was Brooke’s North American Junior Young Rider Championships partner, also stands at Heartland. They also use the stallion Grannus. “Then we have some up-and-coming Kashmere and Cassini I stallions as well; we’re introducing those into the breeding program. We’re trying to keep our program modern and updated. But, when you have stallions like Southern Pride, who’s coming into his 19th year and still doing grand prix, you appreciate the stability of a horse like that. Yes, I don’t go FEI [with him] every week, but there’s a reason for doing that. I stretch his longevity by sparing him from the grueling work of doing the super-hard jumping all of the time,” said Karen, adding that she wanted to thank her sponsors, Bruno Delgrange, Phycox, and Techna Vet Industries.

The Cudmores plan to base in America’s heartland has paid off for them. The lower cost of living and of land in Nebraska and Iowa has been a benefit, and the area allows them the space for their breeding program — plus, is centrally located so that they can easily go east, west, north or south to shows. In any given year, you could see the Heartland string showing on the West Coast in Thermal, California, or in Wellington or Ocala, Florida, as well as at shows in Canada, Colorado, Illinois, Iowa, Kentucky, Louisiana, Michigan, Minnesota and others. They showed recently at the new World Equestrian Center in Wilmington, Ohio, which boasts a huge indoor arena, and Karen said she really loved that facility. She also really enjoys showing at the Denver Stock Show each year, but ultimately, where they go depends on the needs of her horses and her clients. “I always try to put my horses in a circuit where they can shine and I just kind of go where the customers roll.”

As the 2017 FEI World Cup Finals draw near, Karen praised Lisa Roskens for her vision and work ethic in bringing the finals to Omaha. “Lisa is sharp. She’ll step up the game every week until she finds the best way to do everything. Lisa has a good business background and she’s the most ‘unlazy’ person I’ve ever met!”

Karen feels that people coming to the World Cup will enjoy the laid-back atmosphere and the easily-accessible restaurants, hotels and attractions in Omaha. She said that she experiences this when sales clients come to her farm. “The Midwest is a great place to show. What we like about it is that it’s affordable, there’s no traffic, and it’s easy. The airport is only five minutes away from the CenturyLink Center where the World Cup will be. The hotels and restaurants are very close by as well. You almost don’t need a car. It’s exhausting to show at this level. So, exhibitors just want to get there, get to the hotel and get a good night’s sleep and then get into the show grounds and get it figured out. And, to pull into a town where you can get the best steak in town and a beer for under 20 bucks, and good service – oh yeah, everyone is going to love it. We have people flying in from all over the world to see horses at our farm. They say, ‘Boy, this has been pleasant.’ I’m like, Yes, that’s the Midwest!” 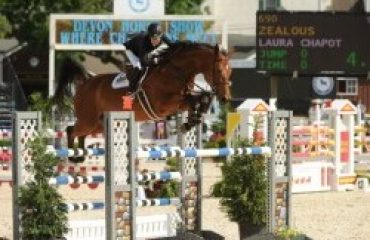 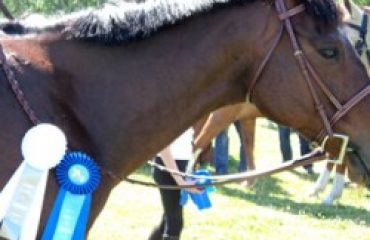 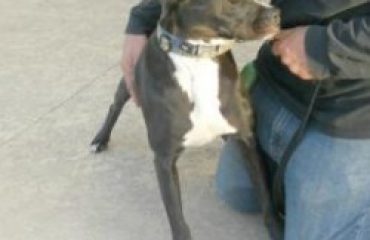 Dog of the Day – Max