Menlo Charity Horse Show is pleased to announce a new addition to our management team. Phil J. DeVita Jr. will be joining MCHS in the newly created… 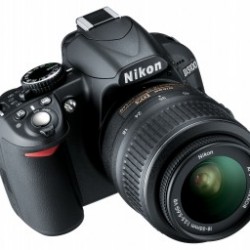 Saturday, April 21 2012 by Editor
When an event ends you think you have so much time before the next year, but for some reason time seems to speed on by. Now we are just weeks away from the 2012 So8ths/Nikon Three Day Event in the “Heart of the Carolinas” to take place at Southern 8ths Farm in Chesterfield, SC, May 3-6 . Just today I was in touch with the title sponsor, Nikon, to get the latest on the prizes the riders will be vying for. I was thrilled when they told me that the Beginner Novice, Novice and Training Three-Day division riders each have a chance to win a Nikon D3100 Outfit with an 18-55 MM VR lens . Nikon will also be giving 2 nd and 3 rd place finishers Nikon Laptop bags. I have one of those and love it
Tagged under: charity, charity-horse, december-2010, december-2011, events, february-2010, finest-eventing, november-2010, september-2010, showcase-nation, sponsor-ovation, wordpress-org 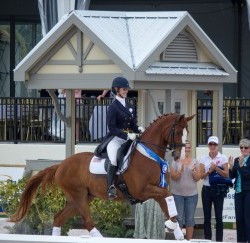 Wednesday, April 18 2012 by Editor
Caroline Roffman and Pie during the victory gallop during the Global Dressage Festival Nations Cup CDI. Photo by by Al Guden   Wellington, FL (April 18, 2012) – Caroline Roffman has a stellar beginning to 2012, with wins across the small tour and developing horse divisions at prestigious shows on the Florida dressage circuit and most recently a gold medal at the Nations Cup CDI.  At the Global Dressage Festival Nations Cup, TeamUSA took the gold, and Roffman’s score of 70.050% on her own Pie put her in second and was a strong contribution towards the medal.  Team Europe took the silver, while TeamUSA 2 took the bronze.  Pie and Roffman also swept the Prix St Georges classes at the Global Dressage Festival Nations Cup.   Roffman recently opened her own training and sales center, Lionshare Dressage, and has partnered with 2012 Pan Am Games alternate Endel Ots to bring the best dressage prospects and training to Wellington.  In the second half of 2012, Roffman has her sights set on multiple championships, including Gladstone and Lamplight, as she looks to the future with her competition horses.   Roffman kicked off her 2012 success in the small tour with Pie, a Hanoverian by Worldly, sweeping the small tour classes at the $50,000 Florida Dressage Classic CDI-W at the Global Dressage Festival.   Roffman also debuted a new mare, Her Highness, during the circuit to great success.  Her Highness, a 9 year old by Hohenstein out of a Weltmeyer mare, is owned collectively by Roffman and Wolkentanzer Farm out ofCalifornia.  The stunning mare with floating gaits easily took top placings at the Palm Beach Dressage Derby, winning the FEI Test of Choice with a 68.421% and the USEF Developing Horse Prix St Georges with a 67.868%.  Her Highness was also in the top placings during the GDF Nations Cup National Show, where they scored a 70% and 69% in the Prix St Georges.  Roffman is aiming Her Highness for the Developing Horse Championships, where Roffman and Pie were Reserve Champion in 2011.   Roffman has plans to compete at 2012 National Young Horse Championships with her own Bon Chance, the 2010 Five-Year-Old Champion and 2011 Six-Year-Old Reserve Champion, who will be headed for the Developing Horse divisions as well.   Caroline is also sure to be defending her title as 2011 Brentina Cup Champion
Tagged under: charity, charity-horse, december-2009, devon-black, education, february-2011, in the irons, on the line, sponsor-ovation, the-barn-book 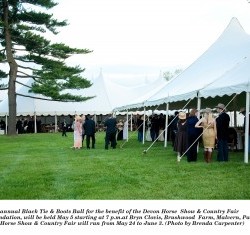 Wednesday, April 18 2012 by Editor
DEVON, Pa.— The Black Tie and Boots Ball, featuring cocktails, dinner, dancing and a live auction, will be held Saturday, May 5 at Bryn Clovis, Brushwood Farm in Malvern.             The Ball benefits the Devon Horse Show and Country Fair Foundation, and limited tickets are available. The evening will begin with cocktails and appetizers, including a specialty cocktail to toast Cinco de Mayo, which can be enjoyed on the lawn under centuries old oak trees, overlooking the rolling hills and paddocks filled with thoroughbreds owned by Betty Moran’s Brushwood Stable. Guests can then move into the tent for dinner and dancing, during which the live auction will be called by Samuel T. Freeman & Co.
Tagged under: atlanta-summer, charity, charity-horse, education, events, every-rider, february-2010, february-2012, higher education, irons-injecting 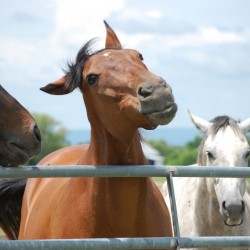 Tuesday, January 31 2012 by Editor
Organizations from every corner of the Thoroughbred industry have come together to support a new program created by the Thoroughbred Retirement Foundation to develop second careers for horses racing at New York Racing Association tracks. The program, forged from a $225,000 start-up grant from the Harriet E. Pfleger Foundation, will provide rehabilitation and retraining for as many as 100 horses a year. NYRA, the New York Thoroughbred Horsemen’s Association and The Jockey Club, as well as the New York Thoroughbred Breeders, Inc. and The Jockeys’ Guild, have all stepped forward with commitments to fund the initiative. “With the spark created by a large donation from a private foundation, we were able to put together a consortium of racing partners to fund and oversee this valuable new program,” TRF Director of External Affairs Diana Pikulski said. “We have a model here in New York that embodies what everyone is trying to accomplish in the industry nationwide
Tagged under: beach, charity-horse, equestrian, european-horses, horses, injecting perspective, laurengallops, november-2011, strides-towards, the-barn-book, united-states, what's happenin'