Monday, September 12 2016 by Editor
By Britney Anderson Greer Grammer is following in her father’s footsteps as she pursues an acting career. At 24, the daughter of Cheers and Frasier’s Kelsey Grammer already has an extensive filmography including roles in in MTV’s Awkward and the TV movie Manson’s Lost Girls. But it was her lead role in Emma’s Chance that
Tagged under: Greer Grammer, hollywood, kelsey grammer 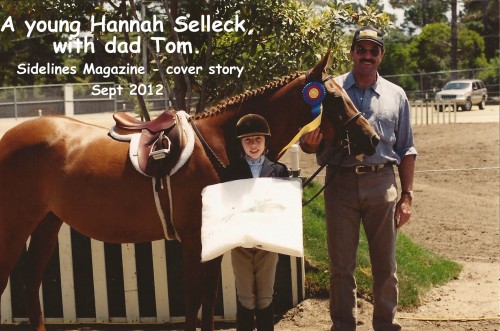 Hannah Selleck – A Star All Her Own

Friday, August 31 2012 by Editor
By Jan Westmark-Allan   As the daughter of famous Hollywood parents, Hannah Selleck could have chosen a career path that included the glitzy and glamorous trappings of a Hollywood lifestyle. Instead of hanging out with celebrities, however, Hannah is far more likely to be found hanging out at the barn – thanks to a love
Tagged under: Blue Bloods, Cats, equitation, Hannah Selleck, hollywood, horses, Karen Healy, Magnum P.I., NAJYRC, spruce-meadows, Tom Selleck

Thursday, April 26 2012 by Editor
Welcome to Rolex Kentucky Three-Day Event, presented by Bridgestone – and the first day of dressage. We had just enough time to get to the stadium where we took a few pix of Sinead Halpin and “Tate” – Manoir de Carneville, who performed the test ride. Last year they finished third at Rolex, winning the USET Foundation Pinnacle Cup as the highest-placed US rider/horse combination as well as Best Conditioned Horse.
Tagged under: adrotate, archives, chasin', education, eventing-nation, hollywood, hollywood-movie, horses, in the irons, november-2011, on the line, things-to-do

ROLEX – Jump Start To London Olympics for US Riders

Wednesday, April 25 2012 by Editor
A lot rides on Kentucky Rolex Three-Day Event, sponsored by Bridgestone, April 25-29 at the Kentucky Horse Park. Not only is it the premier four-star this side of the big puddle (Atlantic Ocean), it is THE PLACE where the Selectors for the US 3-Day Olympic Team will be watching the US contenders through high-powered microscopes. Then, too, there is the British invasion to roil the Rolex “waters” as William Fox-Pitt (GBR), 2010 winner of Rolex with Cool Mountain,  is slated to ride Parklane Hawk: they won 2011 Burghley, which was Fox-Pitt’s sixth triumph in the testing September four-star.
Tagged under: archives, december-2010, february-2011, hollywood, london, november-2010, november-2011, the-barn-book

Monday, March 19 2012 by Editor
Where did the last week go? Well, we spent eight days & nights  horse/dog/cat/chicken/pig & farm sitting – the pig was a real pig, but her people love her and that’s what counts. It’s grand to be home and a few minutes away from our dearling Lord Peter and other lovely pony projects at Bryan and Brandy McDonald’s The Fine Equine Stables, the reason for this post. They will host a clinic with Rex Peterson on March 30, 8:30 am to 6 pm. Here’s the release we put together for Brandy who is the clinic organizer. RJ, star of Hidalgo with Viggo Mortensen, entertained spectators after the last clinic hosted by The Fine Equine Stables with a demonstration of his repertoire of movie tricks with acclaimed Hollywood horse trainer Rex Peterson.
Tagged under: adrotate, archives, chasin', february-2011, february-2012, getting-excited, hollywood, lauren-giannini, november-2011, september-2010, wordpress-org

Horse brokers can serve a very useful purpose and