Tuesday, February 10 2015 by Editor
It was such fun to do my research before interviewing Laura Kraut. I read an article where her mom spoke of how Laura and her sister Katherine had fun showing their horses at the Tryon, North Carolina show, then took them swimming in the creek near the show barns. Even at a big show, having fun played a predominate role and it continues for the sisters to this day
Tagged under: bridge, bridge-farm, Doris Degner-Foster, horse-shows, notes from the field, olympic gold medalist, olympic-show-jumper, sidelines spotlight, the-barn-book, wef, wordpress-org

Monday, July 22 2013 by Editor
After winning her very first grand prix at Horse Shows by the Bay,  Happy Z returns for No. 55
Tagged under: action, barcelona, between the ears, chasin', facebook, higher education, horse, horse-shows, in the irons, show-world, sidelines-magazine, weather

Wednesday, July 03 2013 by Editor
The 21st Annual Doggie Costume Contest Sponsored by  The Brown Dog Deli & Wine Bar &  Animal Planet will take place on  Saturday, July 6th at noon. Dress your dog up in costume and be part of the fun in the special ring set up near the horse show’s Richard M. Feldman Grand Prix Field.    Awards, including the Lulu Perpetual Trophy for the funniest costume, are presented to the “top dogs.”    There is no entry fee and every dog gets prizes.
Tagged under: chasin', doggie-costume-contest, horse-shows, in the irons, lake-placid-horse-show, placid, placid-horse, pony tales, sidelines, story, tails & trails, tucker the wunderkind

Thursday, March 28 2013 by Editor
By Jan Westmark-Allan I have spent many years at WEF (the Winter Equestrian Festival in Wellington, Florida) and I love the show grounds. I was in Wellington this past weekend and there were even more improvements! While I remember when Littlewood was behind WEF and that is where we showed when WEF wasn’t running, Mary Jane Scott remembers even more of the “old show days!” Mary Jane is my guest blogger today and takes us back to the days when WEF was simply called the Show Grounds
Tagged under: between the ears, beval, chasin', florida, flying, higher education, horse-shows, littlewood, show world, South Florida, tails & trails

Friday, March 15 2013 by Editor
With the recent outbreak of Equine herpesvirus 1 (EHV-1) at the Horse Shows in the Sun show in Ocala, Florida, the fear of your horse contracting this (or other) contagious diseases while at shows is justifiable. In addition to staying up to date on the most recent quarantine information, there are many measures you can take to lessen the chance of your horse contracting a contagious disease while away at a show. Your Horse Before you make the decision to attend a show, be sure that your horse is in good health and current on all of his vaccinations
Tagged under: architect, archives, barn, classic, classic-equine, competitors, florida, horse-shows, horses, weather

Time To Talk About Hot Polo Players! (It’s About Time, Too!)

Tuesday, February 26 2013 by Editor
By Jan Westmark-Allan Nic standing against the wall during his photo shoot. Notice his hair is messy on top of his head – someone had to fix it! While in Wellington recently I had the opportunity to enjoy some polo. Of course the ponies were nice, the atmosphere electric but it was the oh-so-handsome polo players that attracted my attention
Tagged under: atmosphere, editor, education, horse-shows, in the irons, pony tales, rob jordan, sidelines tv, tails & trails, the classic insider, tucker the wunderkind, wef 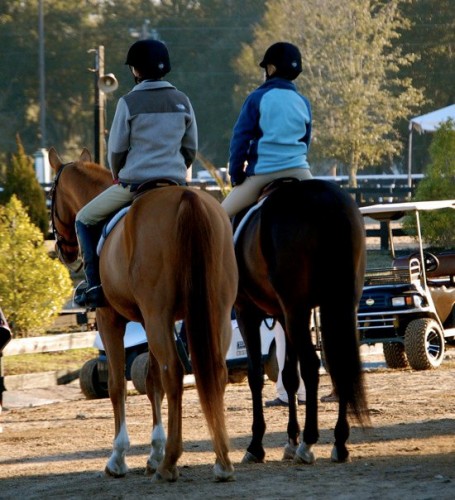 Thursday, November 29 2012 by Editor
Sidelines Magazine invites everyone to take part in our next great contest!! The Sidelines Magazine Backstage Pass Photo Contest will feature behind-the-scenes photos at horse shows!! We aren’t looking for competition photos – we want behind-the-scene photos – horses in the barn, kids on golf carts and mopeds, dogs hanging out with their owners –
Tagged under: horse-shows, photo contests

Monday, July 25 2011 by Editor
During the month of July, New Vocations is hosting horse show events that spotlight Thoroughbreds competing off the track.  The first event was held Sunday July 9th and 10th  where nearly 40 Thoroughbreds gathered at the Kentucky Horse Park to compete in two Thoroughbred restricted Hunter/Jumper classes.  This was the second consecutive year New Vocations Racehorse Adoption Program partnered with the Robert Murphy Horse Show to put on a first class event that attracted Thoroughbreds from surrounding states. Sharp Dressed Guy won the $2500 Thoroughbred Hunter Classic sponsored by Homewrecker Racing.  Owned by Bridget McNeese the Devil Is Due gelding was bred by Dr. John Cummins and trained at Keeneland as a two and three year old, but never showed much speed. McNeese took him on as a show horse at age four.  “I’d kept my eye on him since he was a baby and even told Cummins that he would make a great hunter,” explained McNeese.  “As soon as the decision was made to retire him I got him as a show project.  He has excelled ever since.” Sharp Dressed Guy competing in the New Vocations Thoroughbred Hunter Classic Sweet William who raced as Bait n Switch won the $2500 New Vocations Thoroughbred Mini Prix sponsored by Castleton Lyons for the second year in a row.  Now 17 years old, the Digression gelding raced 16 times primarily at Mountaineer and Pimlico.  He retired and became a very successful Eventer.  Currently owned and trained by Elaine Schott from River Mountain Farm and shown by Natassia Hovey, Sweet William has excelled as a Jumper.  “He continues to amaze us by his huge heart.  He has always been the barn favorite,” shared Schott
Tagged under: charity, december-2010, horse-shows, laurengallops, november-2010, october-2009, on the line, september-2010