Tuesday, June 05 2012 by Editor
June 1, 2012 (Lexington, KY) – Pony Club’s Adult Horsemasters members are being offered the opportunity to qualify for, and compete at the 2012 Championships Competition.  Both East Championships held in Lexington VA July 25-29, and West Championships held in Cle Elum, WA August 7-10 have extended the offer to Horsemasters members to compete at Championships right along with the youth members.  Current members of the Horsemasters Program must qualify in the discipline of their choice and will then compete in either, Dressage, Eventing, Show Jumping or Tetrathlon.  Like the youth members, adult participants will be judged on their Horse Management skills and they will share tack and feed stalls with fellow Horsemasters members.  Unlike the youth competitors, the Horsemasters members will compete as individuals rather than team members and will ride against the other participating adults.   “Taking an inventory of our resources, one sees at the top of the list a large group of competent individuals who serve the Pony Clubs in many capacities, from District Commissioner and local committee member to national officer or member of a national board. Here lies our greatest asset – people; people dedicated to helping children to enjoy a way of life with horses and ponies, which has meant so much as a part of their own lives.” Sherman P. Haight, Jr., M.F.H. USPC President, 1961-1963   About the Horsemasters Program – Started in 2001, the USPC Horsemasters Program was developed to meet the needs of Pony Club parents and other adults to learn more about horses, to feel comfortable around the animals and secure in their knowledge about horsemanship and riding skills, thereby becoming more empowered volunteers to Pony Club at the local, regional and national levels. Horsemasters Groups may be formed in affiliation with a Pony Club, a Riding Center or a Region, and are open to anyone, who is not a current Participating Member, 18 years of age or older.
Tagged under: december-2010, february-2010, february-2011, halliday-recent, higher education, laurengallops, salem-interagro, september-2010, september-2011, tucker the wunderkind, what's happenin' 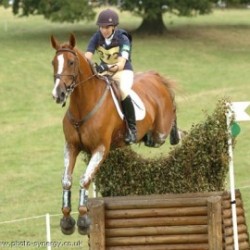 Saturday, June 02 2012 by Editor
Liz at the Borde Hill Horse Trails in the UK An excellent showing from each of her four horses helped Liz Halliday produce a sensational Eventing performance at Borde Hill Horse Trials last weekend that included victory in her BE100 section. Just 30 minutes from her base at Chailey Stud Equestrian Centre in East Sussex, Borde Hill offered Liz the ideal opportunity to give four of her less experienced horses a run after a largely washed-out month of May. That ‘home advantage’ certainly seemed to help Benny (Benaughlin Little Hero) who dominated his BE100 section on Saturday thanks to an overall score of just 27.4. Having not competed since mid-April, Liz was particularly pleased with his all-round performance which included a strong Dressage, clear Show Jumping and near-perfect Cross Country round that featured just 0.4 time fault points. Sunday saw Halliday’s remaining horses entered in Novice sections and once again all three were in terrific form
Tagged under: chasin', congress, december-2009, december-2010, february-2010, february-2011, salem-interagro, tails & trails, wordpress-org