This month, she’ll celebrate her 30th birthday — and Ashley is already living proof that molds are meant to be broken.

She started breaking molds when she traded in her fancy, braided show hunter pony for roached-mane polo ponies at 11. She kept forging her own path as she pursued polo to the professional ranks, highly outnumbered by men.

As a brand ambassador and model for U.S. Polo Assn. for over a decade, Ashley has long since found a way to intertwine her love of both polo and fashion. But staying true to all of her dreams, Ashley designed and launched her own brand last year — all while using her skills and interest to find ways to give back to those in need.

Even in her personal life, Ashley is embracing the unlikely. Since her marriage, she’s also balancing her life in professional polo and fashion with an entirely different world: NASCAR.

Ashley and Kurt at the 2019 NASCAR Awards in Nashville.

Between Kurt, her family and her polo team, Ashley has the support she needs to keep breaking molds, following her dreams and inspiring others to follow theirs.

Ashley’s involvement with horses goes back farther than she can remember. She grew up on her family’s farm in Middleburg, Virginia, where her parents had horses and did casual riding. Her earliest memories are of doing leadline classes, when she was too little to even wrap her legs around the saddle, with her dad at hunter shows and going on trail rides around the farm.

Ashley and her best friend, Isabella Wolf, would take their matching Appaloosa ponies to riding lessons after school. That evolved into showing on the hunter circuit. But when she was 11, Ashley made a discovery that took her pony passion to the next level.

“When I tried polo for the first time, I loved the fact that it was an equestrian sport but that I wasn’t being judged,” she said. “I could run up and down the field and it didn’t matter how my pony looked or what the braids looked like, or so many things that I felt were such a big deal in the hunter ring.”

Since Ashley had grown up riding and also played tennis and basketball as a child, polo was the perfect fit.

“I loved the speed, I loved the camaraderie of my teammates, and the game wasn’t over until it was actually over,” she said. “I think that the horses are incredible, too; the agility of the horses and the ponies. They’re such great horses, but they’re also so low-maintenance compared to show ponies.”

Despite being in elementary school — and the fact there weren’t very many female polo players — her path was set.

“I remember being asked what my life goal was, and I would say, ‘Oh, I want to be the first woman 10-goaler,’” Ashley said. “So I just kind of set out to do that, and to get as good as I possibly could.”

Ashley on the polo field. Her goal is to motivate more people to try polo.

Matches, Modeling and Giving Back

Both Ashley and Isabella were on their high school polo team that went on to win the national championship — an early memory among the most cherished of Ashley’s polo career. Since then, she has not just played in but won tournaments all around the world.

After Ashley picked up polo, the rest of her family began dabbling in it, too. Her dad, Beau Van Metre, even followed his daughter in going pro, and the two played together to win the International Polo Club 12-goal in Wellington — another of Ashley’s favorite memories.

Beyond victories, Ashley prizes the philanthropic opportunities that polo has presented, such as the Veuve Clicquot Polo Classic in New York and the Polo for Life annual event in Wellington.

Ashley has also competed in the renowned Sentebale ISPS Handa Polo Cup twice: in England 2018 and Rome 2019. The invitation-only tournament was founded by Prince Harry, Duke of Sussex, to raise money to support children and youth in Africa.

What Ashley didn’t mention is that she won the 2018 Cup — on the Sentebale team with Prince Harry himself.

Her prowess on the polo field has also led to other career ventures. In addition to her passion for horses, Ashley has always loved fashion. So when U.S. Polo Assn. started seeking real polo players to represent their brand, Ashley was the perfect fit.

“Modeling wasn’t really something that I had wanted to do before, but when U.S. Polo Assn. wanted to start using people that actually play polo, of course I was up for it,” she said. “That was the foundation of my modeling career, and I’ve been with them over 10 years now. I liked that I could be authentic and it could bring the world of polo and the world of fashion together.”

Now, she also models her very own swimwear. Having always wanted to own her own fashion brand, Ashley founded Monarch Reign after noticing her penchant for collecting swimwear around the world.

Her line launched in August 2019 and included her first design, a mesh swimsuit with flowing, hand-embroidered flowers.

“It’s been really rewarding, envisioning a design and then seeing it come to life. That’s been my favorite part,” Ashley said.

She also loves using Monarch Reign to give back —especially when it crosses over with polo.

While her life seamlessly integrates her interests in both polo and fashion, Ashley’s life has also integrated the surprising world of NASCAR.

Ashley has turned her husband, NASCAR driver Kurt Busch, into a polo fan. Ashley is wearing a pink leather jacket, distressed jeans, and Graziela Gems diamond necklaces from Fab Finds by Sarah. Her T-shirt and Gucci belt are from Ella Rue and her polo pony is wearing a browband by Boy-O-Boy Bridleworks.

Before meeting Kurt, Ashley didn’t follow NASCAR at all. She’d never even seen a race. But fate seemed to prepare her with a taste of a true NASCAR fan.

“The funny thing was, I actually had a polo groom from England who was absolutely obsessed with NASCAR,” Ashley said. “She would tell me, ‘Ashley, we can’t play polo this day because I have to go to this race,’ and, ‘We can’t play at that time because the Daytona 500 will be going on.’”

At the time, Ashley was completely baffled: Her groom was totally infatuated with racing and Ashley “just didn’t quite get it.”

“Ironically, I think that was the foreshadowing of me being married to a NASCAR driver,” she said. “Now I understand why she was so addicted to it and she wanted to watch every minute of the race, because that’s how I am now.”

Ashley and Kurt met thanks to Ashley’s oldest sister, who had befriended Kurt through their NASCAR apparel company. She invited Ashley to a race in Martinsville, Virginia, one weekend in fall 2014, and since Ashley had nothing to do, she drove the 4 ½ hours from Middleburg to visit her sister.

“Kurt and I just ended up hitting it off and talking like we had known each other forever,” Ashley remembered. “The rest is kind of history. I still don’t know if my sister meant to set us up or if she thought we would be a good pair, but she was the one who invited me down for the race!”

Ashley and Kurt were engaged in August 2015, married in January 2017 and have enjoyed balancing and being a part of each other’s professional sport lives ever since.

“Kurt’s the best water boy — he doesn’t like to miss a game at all,” Ashley said. “He loves to be there on the sidelines and give the team water and motivation.”

During the racing season, Ashley says Kurt is very cautious. But in the short off season, he and Ashley go on trail rides and Kurt has even stick-and-balled a few times.

Like Ashley, he finds hitting the ball addicting. He also feels like he needs to put the mallet down and really learn how to ride the horse. A horse, after all, has a mind of its own — unlike a race car, even when it’s pushing 200 mph.

“I’ve seen multiple wrecks were people get up and walk away completely fine, without a scratch on them, so I don’t worry about him as much,” Ashley said. “I think he might worry about me a little bit more, because I don’t have a roll cage and a whole car protecting me and a seven-point harness; all I have is a little helmet and some tall boots and a few other pieces.”

But both Ashley and Kurt know risk is just part of the package — as is the incredible amount of focus, dedication and team support needed to excel in a sport.

There are a few other unlikely similarities between NASCAR and polo that Ashley has noticed.

“A lot of people don’t know that racers have a stable of about 12 different cars that they pick and choose from depending on the race and the track, and I find that very similar to polo and the variety of horses we use, with six to eight horses we play in a game,” she said. “And then there’s trailering, and hauling the whole team to each different track and each different field.”

Balancing their lives between all the different tracks and fields comes down to a lot of planning ahead. The NASCAR season is one of the longest in any sport: It starts on Valentine’s Day and lasts until Thanksgiving, with no more than two-week breaks.

Ashley mostly competes during the winter, when she and Kurt live in Wellington. From the middle of May until Kurt’s season is done at Thanksgiving, they live in in Mooresville, North Carolina.

“We enjoy our time together,” Ashley said. “I always try to schedule my games when Kurt can be there.”

“Just Go After It”

Whether at the track, on the field or in business, Kurt and Ashley will continue to cheer each other on.

Just over a year into the launch of Monarch Reign, Ashley’s goal is to continue growing the business and creating new, unique designs.

In polo, Ashley’s first and foremost goal is to keep playing and to have fun — and the most fun thing she can do is family polo. After she had played for years, her parents finally built a polo field at the family farm, where they all get together to play.

“Of course, I do have a competitive edge — when I’m going down to Wellington, I want to win the tournaments that I play,” Ashley said. “So my goal is to continue playing, continue winning and have a strong team, and also to motivate more people to get out and try polo.”

Thanks to leading female polo players like Dawn Jones and the late Sunny Hale, Ashley says she’s seen a huge increase in women playing polo since she first picked up a mallet.

But she didn’t let the male-dominated sport scare her away — and she wants to help motivate other young women to break molds of their own to go after whatever they’re passionate about.

“If you’re passionate about it, you’ll be successful,” Ashley said. “Just don’t give up! It doesn’t matter if it’s a male-dominated sport or career path or whatever, if you feel like the odds are against you. Just go after it; follow your dreams!” 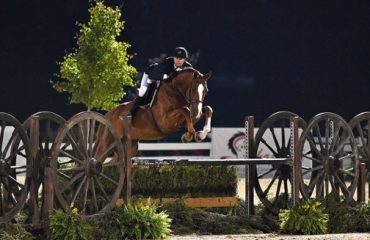 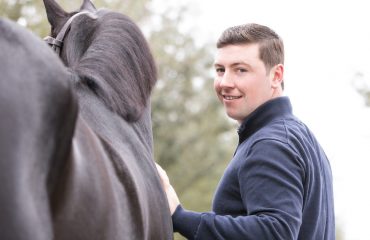