Caitlin Boyle may not have been born in a barn, but it didn’t take her long to get there. As the daughter of horse show manager, judge and trainer Pat Boyle, barn time quickly became a fixture in Caitlin’s life. Today, Caitlin is a professional rider and trainer at Beyaert Farm in North Salem, New York.

Caitlin began following in her father’s footsteps as a child. “I started riding thanks to my father. He grew up riding and training, so it was only natural for me to start young as well,” Caitlin said.

Growing up outside of Chicago, Caitlin trained with Kim Gardiner of Perfecta Farm and spent most of her Junior years competing in the surrounding areas. “I did a little bit of everything including the hunters, jumpers and equitation. I always found the most enjoyment showing in the jumpers,” Caitlin said.

Not only did Caitlin show in all three rings, she was able to do so on multiple horses. “I was fortunate to be given opportunities to ride a variety of horses in the barn. I didn’t mind what the horses were like, I just wanted to spend as much time in the saddle as possible,” she said.

Caitlin acknowledges being born into a professional horse family has its perks and challenges. “Riding horses is a unique and complicated sport, so it was fantastic that my family understood its unusual demands: the time, the traveling and the big commitment of caring for a horse,” Caitlin said. “On the other hand, a bad day at the show comes home with you and it takes extra discipline to learn from the mistakes of the day and move on.”

At age 13, Caitlin made her first trip to equitation finals. She continued competing in the equitation classes until she concluded her Junior years. Caitlin had her first exposure with the “big leagues” when she made her first trip down to Wellington, Florida, for the winter when she was 16. “I was in awe of it all because I had never been surrounded by the best riders in the world or experienced such a high level of intensity. I would spend my time watching the warmup rings to try and soak up as much information as I could,” Caitlin said.

After a great winter circuit in 2013, Caitlin made plans to return the following year with a few adjustments. “The first year I went, I was still in traditional school, so for three months I flew back and forth almost every weekend. The next year, I was in online school and a winter resident of Wellington,” she said.

It was during this second winter in Wellington that Caitlin had the chance of a lifetime, when she had the opportunity to catch ride a horse for equitation trainer extraordinaire Andre Dignelli. Luckily for Caitlin, her time with Andre didn’t end after that first catch ride.

“Andre and my father worked out a plan that allowed me to be a working student at Heritage Farm for the year. Throughout the circuit, I rode many different sales horses for Andre and eventually got the ride on the legendary Clearway,” Caitlin said. “I was over the moon with the opportunity as he was a very special horse to Andre, and everyone at Heritage.”

Caitlin made the most of her last Junior year, winning the Ronnie Mutch Equitation Championship at Devon, the Maclay Regionals in Kentucky and the Hunterdon Cup. In addition to her success in the saddle, Caitlin learned many valuable lessons from the Heritage team that helped her succeed while at Auburn University and as a young professional.

A hard worker prior to arriving at Heritage, that quality was reinforced while she worked there. “A big lesson I learned was to put in the effort every day to outwork the person next to you, both in and out of the ring. When a barn is filled with so many talented riders, it really pushes you to perform every time you get on a horse and every time you’re given a new task or responsibility,” Caitlin said.

Being around those involved at the top of any sport can be an intense, pressure cooker environment. “The amount of pressure in that environment is what I believe makes great riders. By the time we were walking into the ring, the pressure of competing didn’t feel much different than the pressures of perfection we had during our daily lessons,” Caitlin said.

Caitlin’s time at Heritage not only prepared her to conquer the show ring, but she also learned time management and preparedness is the key to success both in the horse world and in life. “Running an operation that large takes so much organization and I was very fortunate to witness a successful process. All the little pieces of the puzzle are what sets horses and riders up to win,” she said.

Caitlin’s goals are to help her clients achieve success, while she also finds success at a high level in the jumper ring.

After her time with Heritage, Caitlin was ready to be part of another successful program: the Auburn Equestrian Team. During her four years at Auburn, Caitlin racked up the most wins by any Auburn Equestrian Team member and was a key part of the university’s NCEA National Championships in 2016, 2018 and 2019.

When Caitlin first stepped foot on campus, during a prospective student visit, she immediately felt it was a place she could call home for four years. “I got along right away with the girls on the team when I was on my school visit and felt the competitive desire from everyone I was around. They all had a passion and drive to be the best,” Caitlin said. “Feeling that, I knew there was nowhere else I wanted to be.”

Riding in college was the first time Caitlin experienced the sport as a team event. “I quickly learned that sometimes in life we need to push our feelings aside to help those around us accomplish a greater goal,” she said. “There were days when I didn’t perform my best but being hard on myself wasn’t in the best interest of the team. My teammates needed me to focus my attention on cheering them on. At the end of the day, the only thing that counted was the team win.”

The pursuit of excellence at Auburn was reminiscent of Caitlin’s days at Heritage, as “catch riding” and the high standards the team set ultimately led them to great success. “Winning the National Championship with my team was the best experience I’ve had in my life so far,” she said.

After a long season with many ups and downs, the team peaked at the right time, in 2018 and 2019. “It takes the whole team to be their best round after round during a long championship week. We experienced a rollercoaster of emotions from start to finish,” Caitlin said. “There is no better feeling than returning to Auburn with the championship trophy riding shotgun in the bus home.”

Caitlin, with her dog Benny, grew up in a horse show family.

When Caitlin received her diploma from Auburn in 2019, she immediately turned professional. She found herself working on the East Coast training horses and riders before returning home to Illinois right before the pandemic hit.

During the 2021 WEF Circuit, Caitlin and her former Auburn teammate/good friend Caitlin Creel were roommates. “She knew that Mattias Tromp was looking to expand his family’s business, Beyaert Farm, and thought I would be a good fit for the job. Thanks to Caitlin, she connected Mattias and I and I began working for Beyaert Farm in the summer of 2021,” Caitlin said.

Having spent their Junior years in the equitation ring, Caitlin and Mattias had run in the same circles; however, it wasn’t until 2021 that their paths truly crossed. Once formally introduced, the duo quickly connected over their shared experiences.

Caitlin spent their Junior years in the equitation ring and rode on the Auburn Equestrian Team during college.

“We bonded over our admiration of a horse named Zentina B, a super mare that helped both of us get top ribbons at USEF finals in back-to-back years. If nothing else, we at least knew we had the same taste in horses,” Caitlin said.

Located in North Salem, New York, Bayaert Farm provides training from pony riders all the way up to riders competing in the FEI level jumpers. They also develop horses for the hunter, jumper and equitation rings. The training team is made up of Mattias, his sister Emily Tromp, and Caitlin.

“I spend my time training riders at home and at shows. When I’m not training, I ride the sales or client horses that need to be worked that day,” Caitlin said. “At shows, both Mattias and I show the horses during the week to make sure they are in top form for their riders on the weekend.”

Enthusiastic and ready to make a mark on the industry as a professional, Caitlin admits attracting customers as a young professional can be a bit challenging. “Some of the most established barns have been training longer than Mattias and I have been alive! Although our individual resumes speak for themselves, we have to prove that we belong right up there with the best trainers at all three rings. That will just take time,” Caitlin said.

Although Caitlin doesn’t yet have years and years of success on the professional resume, she does have a passion and enthusiasm that shines through. “I believe we benefit from being fresh faces because we are young, excited and eager to share our passion for the sport with others,” she said.

With her role at Beyaert, Caitlin looks forward to helping her customers achieve their goals in the show ring. On a personal level, she hopes to find success at a high level in the jumper ring.

“Growing up, I didn’t quite have the horsepower to take me where I wanted to go, but I would love to push myself to new heights and continue to expand my knowledge. We’re in a sport where you never stop learning both on the back of the horse and in the barn,” Caitlin said. “I couldn’t be any more excited for what the future has in store.”

Caitlin, with Max, is a professional rider and trainer at Beyaert Farm in North Salem, New York. 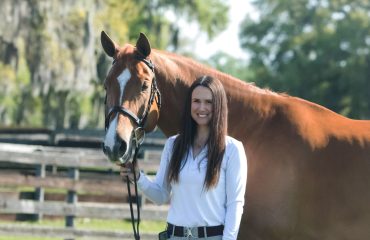 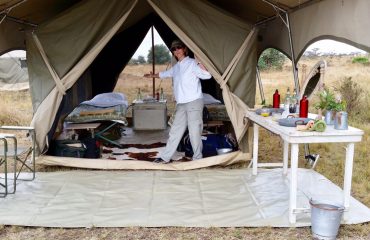 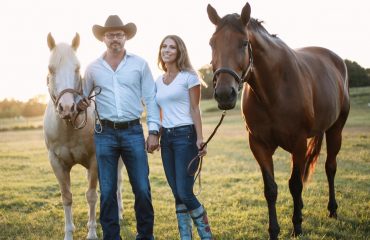