Richie Moloney doesn’t like to brag, but then you don’t need to sing your own praises when you’ve achieved success with the minimum amount of fuss. His natural talent has seen the 39-year-old Irishman collect some of the biggest prizes on the U.S. show jumping circuit, including the Leading Rider title at the prestigious Hampton Classic on no less than four occasions.

He has eight FEI Nations Cup and multiple Grand Prix wins under his belt and is making good use of WEF 2021 campaigning some potential future stars alongside his current top ride, Rocksy Music.

Of all his victories however, nothing compares to being a member of the Irish team that claimed the coveted Aga Khan trophy as winners of the Longines FEI Nations Cup at the Dublin Horse Show back in 2012 partnering with Ahorn van de Zuuthoeve. That’s the holy grail for all Irish show jumpers — get your name on that Roll of Honor and it will never be forgotten.

But as he talks about his life and times, you hear the voice of a man on a quiet mission.

Richie’s life-journey is no surprise, as he was born into a show jumping dynasty established in the 1960s by his late father, the much-loved Tom Moloney Sr., who passed away in the summer of 2019. The Moloney family has been farming their 200-acre home at Warrington in Kilkenny for five generations. Tom’s prowess as a breeder and producer was quickly evidenced by the popularity of the stock that all carried his “Flight” suffix, the most famous of which was Carroll’s Flight, ridden by Eddie Macken.

Tom hired Royne Zetterman, who would go on to compete in three World Equestrian Games for his native country of Sweden, as his main rider in the early years. But as children Tom Jr., Marie, Eddie, Ellie and Richie grew up, Tom Sr. discovered he had a home-grown team of his own. In 1988, Tom Jr. won European Junior team bronze at Mons in Belgium riding Top Flight; in 1991, Marie claimed the Irish national ladies’ title riding Oak Flight; and in 1995, Ellie won European team silver in eventing aboard Valentine Flight.

Eddie has been one of the most consistent performers on the Irish circuit for many years. He was Irish National Showjumping Champion in 2010 riding Slieveanorra, who went on to win a three-star Grand Prix at Vidabaun, France, in 2011 before being sold for Richie to compete.

It was, however, the aptly-named Speedy Flight who first put Richie firmly on the map. Like all of his siblings, Richie competed both horses and ponies in his teenage years, and when he was just 14 he beat all the big names on the national circuit when he won the Grand Prix at Cork in 1996. “I think I may be the youngest-ever winner of a National Grand Prix in Ireland!” Richie said. The pair went on to win European Junior team bronze at Lisbon in Portugal two years later.

Speedy was of course another of the homebreds produced by the family. “Dad used to break them, long-rein them and drive them, and then one of us would start them,” Richie said. “If anyone was getting along well in competition, then Dad wasn’t worried about selling, and Speedy was the one I got on with best. None of us were ever short of a horse or pony to ride!”

And the backdrop to all this activity is the hugely popular riding school at Warrington, which is run by Richie’s mother, Ann, and sister Marie. “It’s always very busy; there are a lot of long-term liveries and some broodmares there too,” Richie said.

When Richie finished school in 2000, he had the option of going to college, but decided instead to take a year out to work and train with Cian O’Connor. It was a great experience and really improved his riding. He never looked back.

“Cian gave me some of his horses to compete at international shows in Europe and we finished off at the Young Rider Europeans in Gijon, Spain,” Richie said. “It was 20 years ago now but I learned a lot, and one of the things that has stuck with me is Cian’s disciplined approach to everything he does.”

In 2001, Richie branched out on his own and for the next few years did some coaching and produced and sold horses while competing successfully on the Irish circuit. In 2003 he won the Grand Prix at Millstreet, Ireland, with Appolonaire, a horse that came from Sweden through his brother Tom Jr. Then in 2008, he visited fellow Irishman Shane Sweetnam in the United States for the first time.

“We were friends through Ponies, Juniors and Young Riders and when he moved to America we kept in touch,” Richie said. “I stayed for three weeks and the following year went back for the WEF. Shane gave me a horse called Triviant to compete in the Nations Cup that year (2009) and the team finished third.”

Shane was already competing for his long-time patrons at Spycoast Farm at the time, and Richie began working for him in 2010. “We were based in Wellington in the winter and Kentucky in the summer, and I fell in love with the whole scene,” Richie said. “It was a great opportunity, and then at the beginning of 2011, the job I have now with Equinimity LLC came up and I was lucky enough to get it.”

“He’s retired now, but he won the five-star Grand Prix in Wellington in 2016, the American Gold Cup and the Hampton Class in 2016 and he was on four winning Nations Cup teams as well,” Richie said. “He was a bit special, the horse of a lifetime. When he went into the ring, he just wanted to win!”

He has a lovely memory from that Hampton Classic 4* Grand Prix victory. “In the prizegiving, the Irish flag was raised and he stood so tall that day,” Richie recalled. “I remember thinking how proud he was of himself!”

Now 18 years old, the stallion may travel to Ireland to do some breeding this spring. “I might never have a horse like him again,” Richie said quietly.

Now, the 13-year-old Irish-bred gelding Rocksy Music is Richie’s top ride. “He was third in the five-star in Wellington last year, has had a good few Grand Prix placings and jumped double-clear in the American Gold Cup last August. He’s the one I’d be hopeful of doing bigger things with this year.”

There isn’t an abundance of Irish-breds competing at the very top end of the sport these days, “but that’s going to change,” Richie said. “There will be plenty in a few years’ time because Irish breeding has really improved, people are more tuned in now to what’s needed and they have easier access to the best stallions in Europe. It’s already moving forward quickly.”

Some of the Equinimity mares that have competed up to 1.60m have been sent to Ireland to breed. “It’s the perfect environment for them, and their youngsters can be produced there until we know if they are good enough to come back here. The oldest of them are just 4 years old now.”

Meanwhile, Richie also has a Holsteiner mare, Coco Beach, who he has high hopes for. ”She’s just turning 9, she’s by Casall and she’s very scopy and talented,” he said. “So far, she’s only jumped to 1.40m and I won’t push her this year but next year I’m hopeful she’ll be ready for bigger things.”

Richie is loving life Stateside. He is surrounded by a great support team including his girlfriend, Siobhan Fitzgerald, who has been working for Equinimity for the last eight years, and farm manager Fiach Bryne who is a lifelong friend.

The Irish community in U.S. show jumping is a close-knit bunch, and Richie counts many of them amongst his friends. “There’s Willie Tynan who jumps Grand Prix and works at a farm close to ours — his father worked at Warrington, and Willie and I jumped in 128cms together — and there’s Peter Lane who worked for Dad in the ’90s and is now an FEI Steward in the U.S. And John Roche from Cork, he was at Shane’s when I started over here and now he has his own business. And, of course, there’s Shane. He has always been there for me,” Richie said, speaking of the man who has been pivotal to Irish team success for many years now.

Their caliber as riders is confirmed by the fact that Shane and Richie have completely dominated the Leading Rider title at the Hampton Classic since it was introduced seven years ago — Shane taking it three times and Richie going one better. It’s a major achievement, but you won’t hear Richie making a big deal about it, because it’s not his way.

In a world filled with people vying for attention, this modest, loyal, committed and determined horseman is no fan of the spotlight. But he’s much too talented to keep out of it. 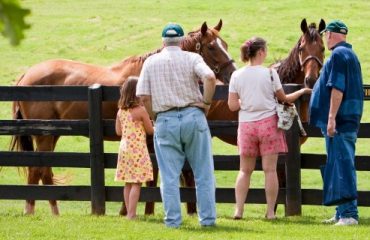 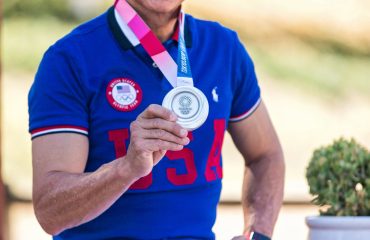