When Marc Ganzi played with Prince Harry in the Sentebale Royal Salute Polo Club charity game in Greenwich, Connecticut in May, it wasn’t just about raising money.

For Marc, it was about raising awareness of polo in the sports world. He has made it one of his life’s missions to promote polo and spread his family’s enthusiasm for the sport. Marc and his wife, Melissa Potamkin Ganzi, have been devoted to raising the game’s exposure among the masses ever since they started playing polo more than a decade ago.

Fans surround Prince Harry, on and off the horse.
Photo by John Robben

The Ganzis have played with royalty before, including Prince William and his father Prince Charles. The charity game was the first time Marc teamed with Prince Harry on the Sentebale Land Rover team that won, 4-3, over the St. Regis polo team.

“We have been lucky enough to get to play polo with the Royal Family several times,” Marc said. “We have built a relationship with them and the Royal Office.”

With the Royal Standard and U.S. flags flying above the scoreboard at the Greenwich Polo Club, Marc led scoring with two goals and Prince Harry scored the tying goal. The polo field was the 28-year-old Prince Harry’s final U.S. appearance after a weeklong trip with stops in Colorado, Virginia, New York, New Jersey and Washington, D.C.

“He is a very competitive player,” Marc said of Prince Harry. “When he plays, he plays to win. It was nice to be on the same side as opposed to playing against him this time around.”

Despite not being on a horse for nearly a year because of his military duties in Afghanistan and royal duties, Prince Harry played well, working both sides of the horse with deft mallet play. The four-chukker game raised more than $1 million for Sentebale, the Prince’s charity for underprivileged children in Lesotho, which he started in memory of his mother, Diana, the late Princess of Wales.

“This was a special match for him since it supported a charity dear to him,” Marc said. “The Royal Office sees how sports, including polo, can help enlist support and create awareness for charitable organizations, something my wife and I put into practice in Wellington.”

The Ganzis built Grand Champions Polo Club behind their Wellington home seven years ago. Since then it has been one of the nation’s fastest growing polo clubs offering polo year-round. “We are truly a full-service club. We have everything someone would need to play – from grooms, ponies, equipment and more,” Melissa Ganzi said.

Marc Ganzi, one of the nation’s top amateur players, has made it one of his life’s missions to promote polo and spread his family’s enthusiasm for the sport.
Photo by John Robben

The Ganzis are all about diversity and promoting the sport among the masses. Their club plays host to kids and juniors, women and gay polo players. There is also the spring and fall medium and 20-goal seasons and international cup play in November.

Both of them would like to see polo embraced by the general public and mainstream sports followers and bring new people into the sport. That starts with erasing the stigma that the sport, once known as “the sport of kings,” is stuffy and only for well-to-do elitists. At Grand Champions, it’s known as community polo.

Polo is one of the most inviting sports around for all walks of life, according to Marc. At Grand Champions, it’s family-friendly, much like an afternoon baseball or football game. Their children, Grant and Riley, both play polo.

“We moved here because it seemed a perfect fit,” Melissa said. “The weather is perfect. It’s like having a baseball or football field in your backyard, only better. We can play off-season polo. A lot of spectators and riders who come out during our season live here in Wellington year-round. Many of our matches are open to the public and have no charge to be a spectator or tailgate. We felt polo should be accessible to everyone. We wanted to make polo part of the community.”

Keeping It In The Family

Melissa has been riding since she was six-years-old. She competed in dressage, show jumping and cross-country. Melissa, who wears her trademark pink polo helmet when competing, started playing polo in 2000 when her father-in-law, Wally Ganzi, a polo player for more than 30 years, gave her a polo pony as a birthday present. “Once I picked up my first mallet I was hooked,” she said.

A year later she became the first woman to win the Monty Waterbury Cup. “To this day, this is my most treasured trophy,” she said. “For me, polo combines my love for horses, my equestrian experiences and my competitive desire. I love the smell of the horses and barn. The smells and sounds of horses put me at ease and make me happy.”

Marc, an avid sportsman, followed his father and wife into the sport. Horses had always been a part of his life. He was raised on a ranch in Aspen, Colorado, where his family rode Quarter Horses. A riding accident as a teenager curbed his enthusiasm. He went on to become a competitive skier for 14 years and NCAA Division I tennis player.

With prompting from his wife, father and a 16-year-old paint named Rex, Marc’s love for horses returned and he started playing arena polo family matches. He not only got over his fear of horses but the natural left-hander learned how to play right-handed.

It was soon after that Marc moved his family from Philadelphia to Wellington and purchased two of the old Palm Beach Polo fields. When not hosting and sponsoring tournaments, the Ganzis compete during the high goal season in Wellington.

Husband and wife, Marc and Melissa, battle it out on the polo field.
Photo by Alan Fabricant

Marc, now one of the nation’s top amateur players, and CEO of Global Tower Partners, is team captain of Audi, which has won every major tournament 20 and 26-goal tournament including the 2009 U.S. Open. In November 2012, Marc’s Team USA defeated England, 8.5-6 in the International Cup.

Melissa is team captain of Piaget, which has also won several tournaments, including the Ylvisaker Cup, where she played against and defeated her husband’s team. “At least we kept it in the family,” Marc said with a smile. 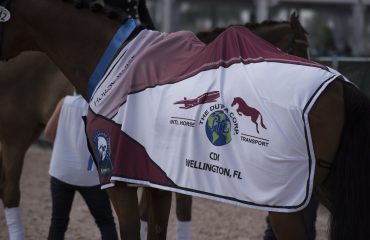 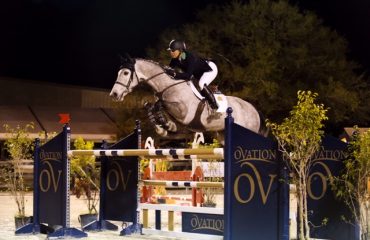 Caitlyn Shiels — Learning From the Best 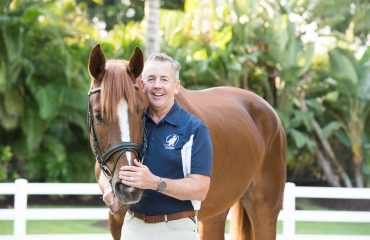 2 Comments to “ The Ganzis And Prince Harry: A Royal Game Of Polo”