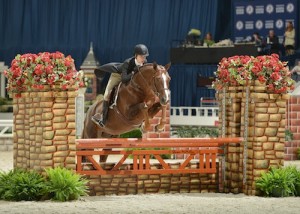 Washington, D.C. – October 21, 2014 – The 56th annual Washington International Horse Show (WIHS) began Tuesday with the first day of hunter competition at Verizon Center in downtown Washington, D.C. The day featured professional and amateur hunters showing in the first classes of their divisions as well as year-end championships for the children’s and adult hunter riders. The WIHS continues its six-day competition through Sunday, October 26.

The $10,000 WIHS Children’s Hunter Championship saw 31 entries on Tuesday competing over a course set by Kenneth Krome of Westminster, MD. The top 12 entries returned for round two where 14-year-old Aubrienne Krysiewicz-Bell of New York, NY, qualified both of her two mounts. The rider won the championship riding Margaret O’Meara’s Monopoly to scores of 84 and 78.5 for a total of 162.5. For the win, she was presented the H. Fenwick Kollock Memorial Perpetual Trophy, donated by Friends of Fen. 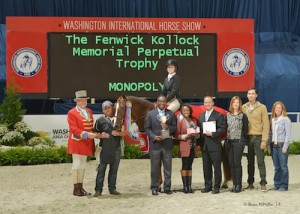 Olivia Notman and Castlewood Farm, Inc.’s Signature finished second on a 161-point total with scores of 82 and 79. Krysiewicz-Bell also placed third aboard her horse Early Winter with scores of 81 and 77 for a total of 158.

Krysiewicz-Bell started training with Andre Dignelli at Heritage Farm in New York three years ago and has seen great progress in her riding. She began riding Monopoly one year ago and showed the 14-year-old Dutch Riding Horse gelding for the first time in Wellington, FL, this winter.

“He is probably the perfect horse,” she smiled. “Everything about him, everything that you would want a horse to be, he is. He is reliable, he is rarely fresh, and he is an amazing jumper. Early Winter is my equitation horse, but I have been riding him in the hunters too and he has been really good.”

Tuesday was Krysiewicz-Bell’s first time showing at WIHS, and it was her goal all year to qualify for the final. This was her last show on Monopoly (a.k.a. Cash) and a wonderful win.

“My rounds today were really good,” she detailed. “I thought that they were smooth. I think I was a little more confident than I have been on them in the past because I just was relaxing and thinking about the quality of the round and focusing.”

“I came down yesterday and I was able to look at the ring and look at the schooling area and that gave me a sense of how it would ride and what the ring would feel like when I was riding in it,” she added. “Also, I got up this morning and I schooled a little in the ring, so I got a feeling of how I would need to ride later today. I had never been here before, and it is wonderful to come here and have this success. I love the ring. It is amazing to be here, and it feels incredible to win.”

Krysiewicz-Bell is a student at Marymount School in New York City and commutes to Heritage Farm four to five days a week after school to ride. This winter she will return to Florida to continue competing. 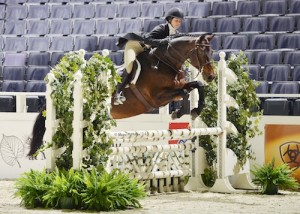 The $10,000 WIHS Adult Amateur Hunter Championship, sponsored by The Linden Group at Morgan Stanley, concluded day one at the 2014 WIHS with 27 entries showing over the first round course and the top 12 returning. Laurie Barna of Dallas, PA, finally got her victory after several top finishes in the competition in previous years. She rode her veteran mount Laguna, a 21-year-old Holsteiner gelding, to victory with scores of 78 and 81 for the winning total of 159. 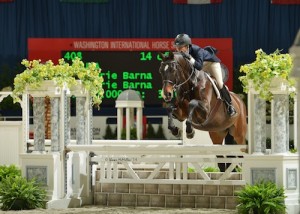 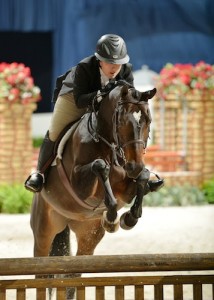 Barna started training with Liz Perry-Merbler at High Brass Farm in New Jersey in 2000 and has ridden Laguna for almost five years. The horse was previously her niece’s equitation horse and has given Barna great confidence in her riding.Jacquelyn Maggiore and Contina finished second with a 155-point total on scores of 76 and 79. Dana C. Nifosi and Knob Creek placed third with scores of 72.5 and 82 for a total of 154.5.

“We have been coming here year after year, and I just can’t believe we actually finally won,” Barna beamed. “I have been doing Washington with either hunters or jumpers for at least 10 or 12 years now and this is my first time (winning). We are always a bridesmaid, but not this year. This is very exciting, especially on that horse. He is like our family heirloom. He has been in our family for a long time now. He was my niece’s equitation horse and when she went to college, we couldn’t bear to sell him. It is very sweet to have won it on him. We are probably semi retiring him this year and I thought, ‘Well, this is my last go of it.’ I can’t believe we actually got it.”

“Liz and I have been at this together for 15 years. I have a full-time job, and I only get out there once a week. Liz takes care of everything else,” Barna explained. “They have a rehab facility there, and he does the AquaPacer three times a week because it is a low impact workout. That is wonderful for him. Liz hacks him, and I have a lesson every Friday. I am very fortunate that he has so much experience, and he just loves it. He is wonderful.”
Although Barna still plans to show Laguna lightly next year, this win capped off an excellent partnership at one of her favorite shows.

“I was walking around the schooling area talking to him, saying, ‘All these years together buddy, do you think we can pull this off?’ It has never worked out. I landed off that last jump, and I thought, ‘Could it be?’ This will not be his last show. We might just have some fun with it next year, but it will be very limited. It will be hard to give him up. I have to wean myself off. Who knows, but how can you top that?”

Though she has many years of experience showing at WIHS, competing in the city never loses its luster for Barna. “I absolutely love it. It is just the atmosphere here,” she smiled. “Everything is so electric and unusual. It is just a neat show to be at. It is so friendly. I love being in the city and the horses walking down the street. It is a beautiful arena. It is challenging, but luckily I have a horse who doesn’t require much. There is just something about horses in the city that makes it really special.” 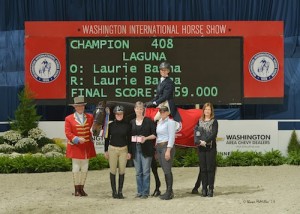 Laurie Barna and Laguna in their winning presentation 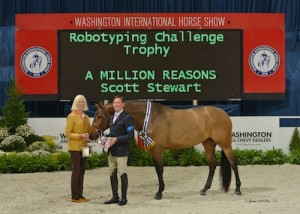 Scott Stewart and A Million Reasons with Dr. Betsee Parker

The Washington International Horse Show continues on Wednesday with championships for the professional and amateur-owner hunter divisions as well as the $10,000 Children’s Jumper Championship during the day. The evening session, which begins at 7 p.m., will feature the $10,000 Adult Jumper Championship and the $10,000 International Jumper speed class, sponsored by Amalaya Investments. For full results, more information, or to watch the free live stream of the show sponsored in part by The Nutro Company, please visit www.wihs.org.Also showing on Tuesday, the professional hunter divisions completed their first day of competition at Verizon Center with a very successful morning for Scott Stewart of Wellington, FL. The Robotyping Challenge Trophy was presented to Stewart and Dr. Betsee Parker’s A Million Reasons for the best Green Working Hunter round of the day with a high score of 92 in the Second Year Green Working Hunters. Stewart also accepted The Fairfax Hunt Race Association Challenge Trophy for the best Green Working Hunter handy round with a score of 86 aboard Stephanie Danhakl’s Quest in the First Year Green Working Hunters. 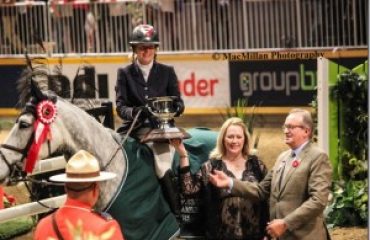 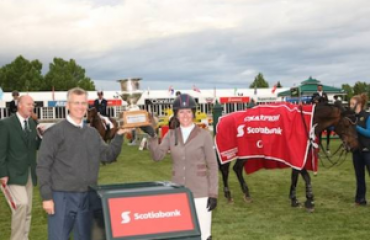 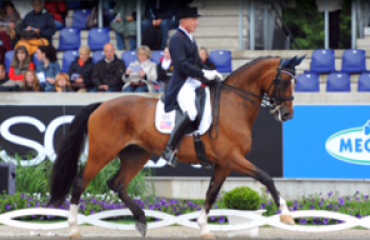