Wayne, IL – July 25, 2013 – Accuracy was key for Brittini Raflowitz and Elios this afternoon during the $5,000 GGT Footing Welcome Stake at Equifest I. The pair out jumped all fellow contenders as the only ones to post a double-clear effort, eventually leading the victory gallop in the Lamplight Equestrian Center’s Grand Prix Ring. David Dorner and Barack captured the second place award, and he also guided Casino to the third place position.

Manuel Esparaza of Mexico designed the $5,000 GGT Footing Welcome Stake course, testing horse and rider alike with 12 obstacles. He utilized a liverpool, vertical-oxer double combination, and a oxer-vertical-vertical triple combination. The course was the story this afternoon as each rider attempted to leave the rails in place. 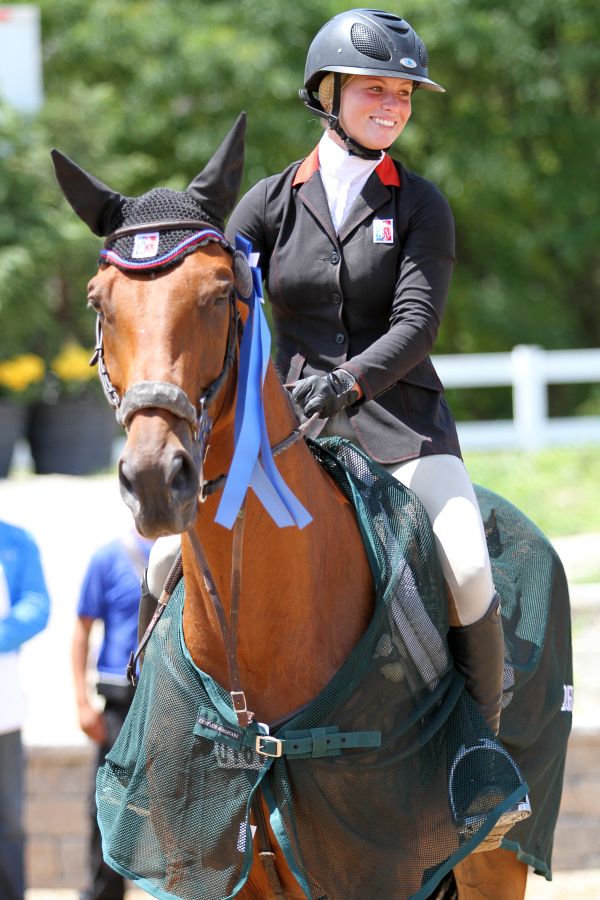 Brittini Raflowitz and Elios rode to the top of the $5,000 GGT Footing Welcome Stake leader board at Equifest I, riding to the only double-clear effort of the class.

David Dorner was the first to take the track this afternoon. He piloted Casino, owned by Blackdog Enterprises of Marion, IN, through the first round, incurring eight faults in a time of 87.335 seconds. As the first rider to take on the course, Dorner continued to have hope for his next mounts. It was Brittini Raflowitz of New York who would make Dorner put on a chase.

Raflowitz was only the second rider to take the challenge, but she went into the ring with brimming with confidence aboard Elios, owned by Maarten Huygens of Wellington, FL. She cleared the first round going with a conservative pace, focusing on accuracy after watching the previous round.

“He needs constant leg to hand,” Raflowitz explained. “He likes a nice forward step, and the base of the jump. If you can get him to the base, he just explodes every time. I liked the course today, the designer did a nice job where everything was a little bit spread out, but it was nice. It wasn’t too technical for the contenders we had today, and I thought it was a very smooth course. I am excited to see what he builds later in the week.”

Raflowitz went immediately into the jump-off upon tripping the timers with all rails in their cups. She started over the original last obstacle, a green vertical, and made a right rollback over a single vertical set on the outside of the arena. She made an inside turn over the oxer set on the diagonal, and then with a left rollback took the vertical-oxer double combination. With a smooth left turn that called for a pick up in pace, she took the single vertical and moved forward through an inside left turn to the orange-and-white oxer where she made a sharp right turn to finish over the final obstacle. Her strategy proved good as she broke the beam in 42.410 seconds with a double-clean effort.

“We tried our hardest to clean it up out there,” Raflowitz said jokingly. “I began riding him in March, and very slowly we moved him up. He is just beginning with the 1.45m, so this is a good start to the week. I am really happy with how today went, and proud of how far he has come.”

Dorner attempted to best the young rider as he entered the ring aboard Barack, owned by Sarah Kemper of Chicago, IL. The quick-footed Thoroughbred was a class winner yesterday, but an unfortunate step at the fourth obstacle cost them the win. With four faults from the first track, the pair did not move into the jump-off; however, they did eventually take home the second place.

“He is a little bit crazy, but a lot of fun. He is crazier than all get out, but we have a great time out there,” Dorner stated. “He needs an easy ride. We had a cheap rail, but he was perfect the rest of the way around. He was jumping great, but he just got a little careless for a moment.”

It was the young Casino who really stood out today for Dorner’s mounts. This was his first time competing over the 1.40m height, and with only eight faults on the course, he made his owner proud. Dorner was dually awarded the third place award for their effort. 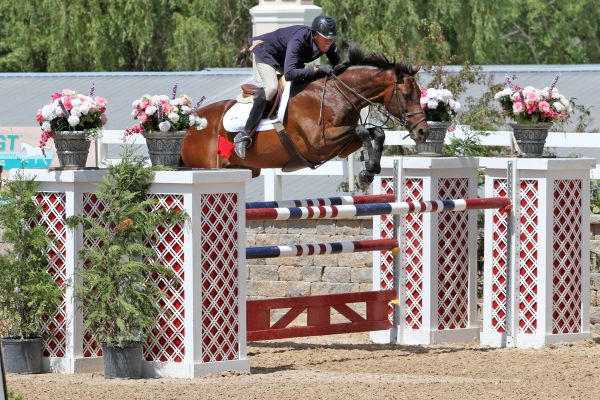 David Dorner and Barack earned the second place finish as the fastest of the four-fault efforts in the $5,000 GGT Footing Welcome Stake.

“Casino took that height for the first time ever today. He was very, very good, and I was very proud of him,” Dorner said. “He needs a lot of leg and support out there. You really have to be on your game with directing. He jumps great; he just needs a little bit more time in the ring.”

It was Christina Williams who captured the fourth place award with Clean Slate, owned by Blackdog Enterprises. Dorner also rode to the fifth place position with Upido, while Belvue Ben with owner Sarah Kemper rounded out the top six.

It was a very exciting moment for Welcome Stake sponsors, GGT Footing, as they presented Brittini Raflowitz with the first place ribbon in the winner’s circle. Her father, Brett Raflowitz, is one of GGT’s largest distributors, and it was with his assistance and that of his crew, that the footing at the Lamplight Equestrian Center is in such pristine condition.

“We wanted to show support to this individual show, Allen Rheinheimer is someone we have really had a longstanding relationship with, as well as this doing all of the footing for the Lamplight Equestrian Center,” GGT Footing National Account Manager Cynthia Brewster-Keating said. “It was a real honor that we were able to present the ribbon to one of our top distributor’s daughters. We are so happy to have this moment; it is so special.”

Raflowitz was all smiles as she accepted the award and rode the victory gallop with the blue ribbon waving in the breeze from Elios’ bridle.

“It was exciting for us, as well as GGT Footing,” Raflowitz smiled. “A couple of days ago, we were joking around about the possibility of me winning the class, and then it happened. We are taking it day-by-day with Elios. Since he was great today, we are going to put him in the Grand Prix. We plan on staying for both weeks of Equifest, and then we have a long drive back to New York.

Raflowitz concluded, “Winning any class, is a big deal for me. Whether you win a lot or not, each class win is exciting all in its own. He was jumping great, and that was all that matters. It’s all about him feeling good, and us having fun.”

To find out more about Lamplight Equestrian Center, go to:  http://lamplightequestriancenter.com/ 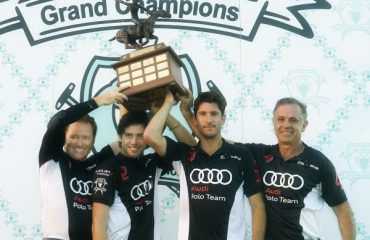 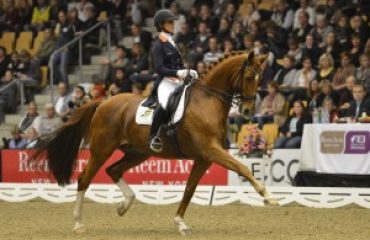