Forty-five entries showed in the prestigious World Cup qualifier jumping a course set by Steve Stephens of Palmetto, FL. Representatives from 14 different countries competed, including an impressive 20 riders that have appeared in Olympic Games for their home nations. In a thrilling race against the clock, eight of the world’s best made it to the jump-off and four jumped double clear.

Ben Maher and Jane Clark’s Cella were the first pair to clear the jump-off course and set the leading time at a lightning fast 40.12 seconds. Nick Skelton was up next with his great mount Big Star, owned by Beverly Widdowson. They cleared the course in 41.01 seconds. Alvaro de Miranda and AD Rahmannshof’s Bogeno, owned by Miranda and Victory Equestrian BV, went next and stopped the clock in 40.46 seconds. Their round was followed by a stellar performance from Daniel Deusser and Cornet d’Amour, owned by Stephex Stables and Pedro Veniss. They flew through the course in 38.94 seconds to earn top prize. Maher and Cella finished second, de Miranda and AD Rahmannshof’s Bogeno were third, and Skelton and Big Star placed fourth. 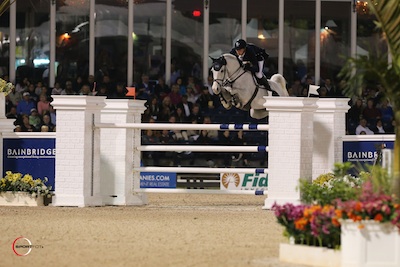 Daniel Deusser has ridden Cornet d’Amour, a ten-year-old Westphalian gelding by Cornet Obolensky x Damiani, for ten months since he began riding for Stephex Stables in Belgium last May. After a couple of months off and a 1.40m class at a national show in Germany, the pair traveled to Wellington this winter and jumped right in with week eight’s Nations Cup.

“I was doubting that it was maybe a little too quick to start with the Nations Cup last week, but he came in that ring and he felt fantastic,” Deusser stated. “He jumped double clear in the Nations Cup and was third in the class Thursday and he wins now, so I think he did a really good job.”

Commenting on the class, Deusser noted, “The beginning of the class we didn’t have too many clear rounds, but at the end we had very good riders and very good horses. The quality of the horses and riders in the jump-off was really good and they started very fast. For me there was no choice, I had to try it and we were a little bit lucky and it worked out today.”

“I saw that the jump-off was really fast,” Deusser detailed. “I saw Nick just before I went in and he did eight strides to the last fence. I thought that it was really long, but at the beginning I already had a really good turn from one to two and really kept the triple bar on the inside. Then also to the double vertical I had a really good turn. I had already a really long distance to the second to last fence and I thought ‘Okay, I’m going to do the eight.’ It was risky and my horse helped me a lot; I think that was the reason I was actually faster.”

The packed house of over 6,000 spectators at the Palm Beach International Equestrian Center (PBIEC) went wild when Deusser galloped through the timers, but he was very focused.

“When I went to the last fence I was actually a little bit scared that I couldn’t make it, so I didn’t actually listen to the crowd, but it was a nice feeling afterwards,” Deusser laughed. “It’s one of the best competitions I’ve won so far. It was very good money and in the moment, it is one of my best results.”

Along with prize money, Deusser was also awarded the Herman ‘Kappy’ Kaplan Perpetual Memorial Trophy, established for Kappy with fondness by the Farriers of the 1995 WEF. 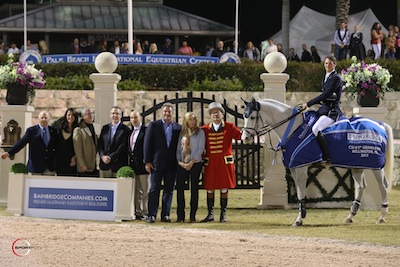 Daniel Deusser and Cornet d’Amour in their winning presentation with Richard Schechter, Chairman and CEO of The Bainbridge Companies with his executive team, Mark and Katherine Bellissimo, and ringmaster Cliff Haines. Photo © Sportfot.

Finishing second, Ben Maher did everything he could in his round and was pleased with the results. He spoke about the quality of the class and the excitement of the competition.

“Every week the jump-offs get faster and faster,” Maher noted. “It looked for a long time like there wouldn’t be many clear rounds tonight and then there were a lot at the end of the class. I think probably some of the fastest horses there are anywhere right now are all here in the same jump-off. For me, I was third in the jump-off, so I had to do everything possible to make the others chase us, which is what we did. We held on for as long as we could and in the end one managed to catch us. All the horses jumped great and it was an exciting round.”

“The jump-off was not too many options, again. It always tends to be a little like that in Florida,” Maher remarked. “There’s a lot of galloping. I don’t know where I could have gone any faster unless I left a jump out. Daniel was amazing. He was in a great position and he had nothing to lose. There were three or four of us all within the same second, so if he didn’t do what he did, he was only going to be fifth anyway. Congratulations to him, he pulled off an amazing jump-off tonight.”

Alvaro de Miranda had his best result of the circuit this evening and was happy with his horse as well.

“I was very happy to be in the jump-off,” he acknowledged. “We have been trying every week and I’ve had one down and down and down and finally today I was really happy because I think I had a good round and my horse was jumping super. We had the fastest horses in the jump-off and when I came out and I saw that I was quicker than Big Star but slower than Ben, I was happy.” 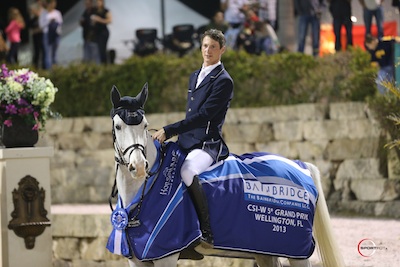 The Sam Edelman Equitation Championship was held over two rounds on the grass derby field at The Stadium at PBIEC earlier on Saturday. Twenty-eight entries showed over the first round course set by Skip Bailey of Wellington, FL. The top 15 then returned for a second round. Performances were judged by Tucker Ericson and Ken Smith.

Top young rider Lillie Keenan of New York, NY, rode Heritage Farm Inc.’s Levistano 2, an eleven-year-old Holsteiner gelding by Levisto x Lord, to the Sam Edelman victory. The pair topped both rounds of competition with back to back scores of 89 for an unbeatable 178 point total. 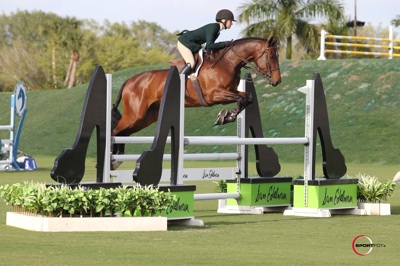 Keenan has been showing ‘Levi’ since the beginning of the FTI WEF circuit and has had several wins with him in the Platinum Performance USEF Show Jumping Talent Search, ASPCA Maclay and Pessoa USEF Hunt Seat Medal classes. Keenan explained that they have meshed well from the beginning and that although she had never ridden him on the grass until Saturday’s class, she was never worried.

“He had been schooled on the grass before with one of the trainers at Heritage, so I knew that he had already done it,” Keenan noted. “He doesn’t care about natural obstacles and really is brave so that is very helpful going into that ring, knowing your horse wants to go around.”

“I really like those classes,” Keenan added. “I like the galloping and I think that is a really fun type of class for the equitation because it still is testing your ability with the adjustments and it is kind of a stepping stone towards the jumpers, but it is in a really big ring, galloping around a field.”

Keenan and Levi won well over second place finishers Allison Toffolon and Class Action’s total of 170 from an 84 in round one and an 86 in round two. Third place went to Sydney Shulman and Back Country Farm’s Eli, who scored 85 and 83 for a 168 point total. Anna Cardelfe and Ulrich, owned by Gray Horse Farm Hamptons LLC, finished fourth on 167.5 with scores of 83 and 84.5.

Heritage Farm’s head trainer Andre Dignelli coached the top two finishers, Keenan and Toffolon. For the win, he was presented with a special $10,000 Trainer’s Award. Keenan credited Dignelli and the rest of the team at Heritage for the parts they played in her victory.

“Andre rode my horse this morning, so he gets all the credit for the preparation,” she smiled. “I could not ask for a better team. There is Andre and it is also everyone else at Heritage. Without them I would not have won. Going in there and knowing that everything has been done to make sure that you have the opportunity to win and now it is just your job to pull it through, it puts on the pressure, but also it is a really good feeling. I give all the credit to Andre and everyone at Heritage – and the horse.” 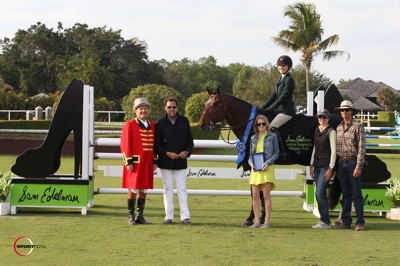 Lauren Henry, of North Kingstown, RI, rode her own Esteban La Paz to championship honors in the Equitation 15-17 during week nine of the FTI Consulting Winter Equestrian Festival (FTI WEF). Henry and Esteban La Paz, a fourteen-year-old Hanoverian gelding, were third under saddle and jumped to first and fourth place over fences. Reserve honors went to Maggie Savoie and her own Ksenyio. The pair won the under saddle class before placing third and seventh over fences.

Esteban La Paz stepped up to the plate for Henry last year when she was in search of a horse she could compete in 3’6″ equitation classes. The gelding was already Henry’s trusted mount for hunters and happily adjusted to the equitation ring.

“The first time we rode him, we just clicked,” Henry described. “Last year, I was doing hunters with him but when we changed him to equitation, he just loved it.”

“He can still do the hunters, too, but he’s too slow for the jumper ring,” Henry smiled. “He’s better at equitation because he likes to get in a frame more and he’s easier to ride that way as well.” 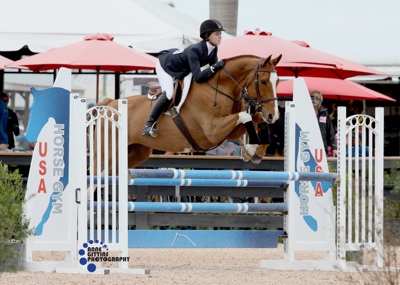 Henry credits her equitation success to Esteban La Paz’s striking markings and exceptional show ring attitude. “He’s got a big spot on his belly, which helps us stand out!” Henry smiled. “He jumps really well and when he’s on, he’s on! He and I just get along so well and he’s so much fun to ride.”

Henry was more than pleased with her gelding’s performance on Saturday and enjoyed the challenge of the courses laid out before her. “I thought both courses rode very well. Our first round went perfectly. The second round, he took a peek at the scoreboard which hurt our score, but he was still great. The bending line at the end of round two was a little challenging. We probably could have gotten five instead of six,” Henry commented.

2013 will mark Henry’s fifth year making the journey south for the FTI WEF, which she eagerly attends in search of high-caliber competition and, like many other competitors from the North, the Florida sunshine.

Hunter competition during week nine of the FTI WEF, sponsored by The Bainbridge Companies, will conclude Sunday with the Pine Hollow Low Children’s Hunter 2’6″ division hosted in Ring 8 of the Palm Beach International Equestrian Center (PBIEC). The $82,000 Suncast® 1.50m Championship Jumper Classic will be featured in the International Arena. For full results, please visit www.showgroundslive.com. 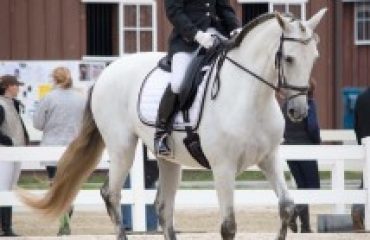 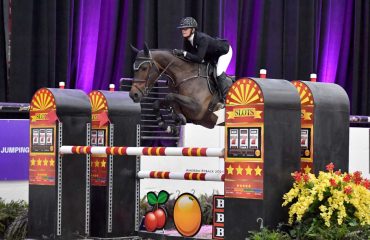 Looking Back on the Las Vegas National 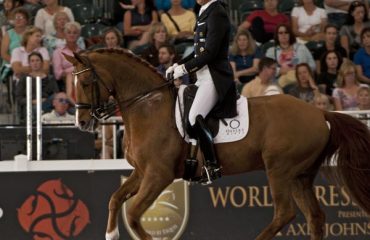