(SPRUCE MEADOWS, Calgary, AB): The sun shone on Saturday at the 2012 Spruce Meadows ‘Canada One’ Tournament. This was particularly true for American veterans McLain Ward and Mario Deslauriers. 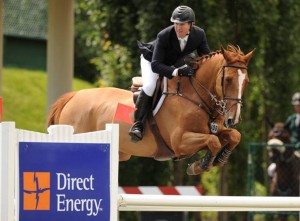 Fifty nine horse/rider combinations saddled up for the 1.45 meter Direct Energy Cup this morning, competing for top spot over the 500 meter long course designed by Anthony D’Ambrosio (USA). Over 16 jumping efforts, the field was narrowed down to the 13 combinations who moved into the jump off. In the end, nobody could catch two-time Olympian McLain Ward (USA) and his 11 year old Dutch Warmblood gelding, Pjotter Van de Zonnehoeve, who finished with double clear rounds and a jump off time of 35.96. Ward is no stranger to the winners circle at Spruce Meadows, and was just named to one of four spots on the 2012 US Olympic team. The win was particularly gratifying, as Ward is just returning from a severe leg break suffered in January.

There was $50,000 dollars on the line for the 1.60 meter RBC Financial Group Cup. Twenty four horse/rider combinations took to the course, designed by Anthony D’Ambrosio (USA) that stretched over 510 meters with 16 jumping efforts. Out of the 5 combinations in the jump off, Mario Deslauriers (USA) took the victory aboard Urico, his 11 year old Dutch Warmblood gelding. This marks Deslauriers’ second FEI win at Spruce Meadows this season, after taking home the TransCanada Parcours de Chasse during the Spruce Meadows ‘National’ tournament. “My horse felt great today, and following Beezie in the jump off, I knew I had to pull out all the stops. It worked” Said Deslauriers following the win. “I’m very pleased.”

Oh Canada! Tomorrow, Spruce Meadows celebrates sport and country Highlighted by the $100,000 Esso Challenge World Cup Qualifier. Families are able to come out and participate in a multitude of activities for Canada day, and watch as the world`s top riders fight for first place. Competition begins at Spruce Meadows on Canada day with the West Canadian Cup at 11:00 AM, followed by the Esso Challenge World Cup Grand Prix. 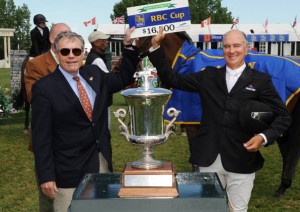 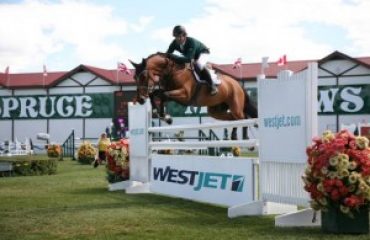 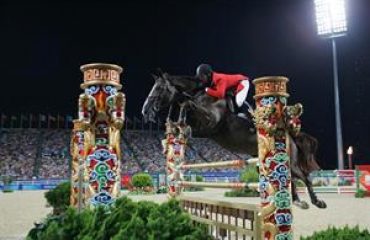