Wellington, FL – January 8, 2013 -Equestrian Sport Productions hosted its A-T Children’s Benefit Horse Show on January 3-6, 2013, at the Palm Beach International Equestrian Center (PBIEC) in Wellington, FL, with a full schedule of hunter/jumper competition. The week featured a $25,000 Grand Prix and $10,000 Welcome Stake along with hunter, jumper and equitation divisions throughout the week. At The Stadium show grounds, a successful second edition of the Spy Coast Farm Young Horse Show Series Finals was held in the VanKampen Arena with increased entries and some of the country’s best young sport horses.

On Saturday evening, the International Arena at PBIEC saw 43 horse and rider combinations in the $25,000 A-T Benefit Grand Prix. Competing under the lights, exhibitors jumped a course set by Anthony D’Ambrosio of Red Hook, NY. Seven entries were able to clear the course to advance to the jump-off and three completed double clear rounds to earn top honors.

Great Britain’s Amanda Derbyshire was the first competitor to jump-off aboard Becky and David Gochman’s Attack II and set the pace with a clear round in 40.763 seconds to eventually finish third. Canada’s Ian Millar and Dixson, owned by Ariel and Susan Grange, were next to clear the course and stopped the timers in 40.506 seconds to take over the lead, but they would eventually finish second. Next on course, USA’s Aaron Vale and Zippo II, owned by 2VR Show Jumpers, blazed through the track a full two seconds faster in 38.304 seconds to take the win.

“His potential looks good,” Vale smiled after the class. “He arrived in my barn a week ago, so this is a hell of a start I have to say. He went wonderful all week. He is straightforward, he is scopey, he seems like he is really careful. It looks like we have a real nice horse here.”

“He jumped around real nice,” Vale added. “He was fourth in the 1.40m yesterday. He wasn’t turning super, but he was just so comfortable with the jumps and all, so I figured he would handle the lights and everything at night. I thought it was worth a try and it was. He was a little bit wiggly, but he steadied and waited for the jumps when he needed to and he just feels like a beautifully produced horse. I am lucky we got him.”

Vale saw a video of Zippo II and went to London to try him. He described what he knows about the horse’s previous years.
“I bought him out of England and he mostly had just jumped up to 1.40m so far, but I think he had a real good background,” Vale stated. “They brought him up slow and put a real good foundation under him. I think he was in Scott Brash’s system. I don’t think he showed the horse himself that much, but it had been in his program and they did a beautiful job. He is lovely.”

Vale described his plan in the jump-off, noting, “It was mostly a galloping course. The main thing was not to let the galloping trick you into going too fast and having one down in the combination. For a big horse he is really pretty light and quick across the ground it seems. He was quite quick. I held up to the vertical in the center because I wanted to get his mind waiting a little bit because he is still green. I could have easily left a stride out there, but I wanted to make him wait before the combination so that he was thinking about slowing down and jumping up. I took a pretty big chance at the last fence. I don’t think he knew what I was asking. I asked him to go that fast and I don’t think he realized there was another jump, but he made a good effort when we got there. I was hoping the time would hold up and it did.”

The YHS competition began on Saturday, January 5, in the VanKampen Indoor Arena. The day featured the first round for Four and Five-Year-Olds competing in classes Under Saddle, Jumping and Dressage. Classes were also be held for all age divisions in the In-Hand/At Liberty and Jump Chute. The top three scoring horses of each class then qualified for the second and final round that was held on Sunday. Following the competition on Saturday, a special stallion show was also held in the indoor arena where top breeding stallions were presented in-hand. On Sunday, January 6, the final rounds of each divisions were held. 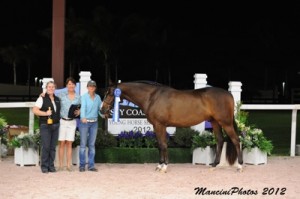 Lisa Lourie of Spy Coast Farm had great things to say about this year’s Finals and the growth of the shows.

Lourie stated, “We had quite a bit of growth both in the number of horse shows we had this year from the previous year and also in the number of horses that we had participate in the final. I would say the participants were much more comfortable with the whole process. It was just a very easy show to run. People were able to hang out and watch their babies in a nice, comfortable, safe environment. I think this facility was perfect for the event. People felt special and they got their money’s worth.”
“We have added on three or four more dates for next year just at this function,” Lourie noted. “People have come up and offered to have more shows, including two in California and one potentially in Canada. That was a terrific addition this year.”
“We had increased attendance this year of spectators and a lot of breeders and trainers came to watch. We had a very good stallion show as well. It is really becoming a mixed place of trainers and owners and breeders and show staff and even people from USEF and USHJA, so it is really gaining ground.”

The Young Horse Shows give breeders, owners, and trainers a chance to showcase yearling to five-year-old young sport horses in an age appropriate setting, helping to promote breeding in America and in turn create a marketplace for trainers and riders to purchase young horses.

Lourie explained, “Of the finalists, our percentage was much higher this year than it was last year; it was probably close to 85% of horses bred in the U.S. The quality was better this year and it was already an international quality last year. When you look at the finalists that we pinned, you see horses that could perform well anywhere, so we are very excited. People are really getting the message that a sport horse is a sport horse and you have to figure out what a horse is going to be when it grows up no matter what the breeding. This show gives them an opportunity to try different things.”

Following the Finals for 2012, YHS will be coming into its third year of competition in 2013 and will host two events during this year’s FTI Consulting Winter Equestrian Festival (FTI WEF). Both shows will be held at The Stadium at PBIEC. The first show will be held on Saturday, March 2, during FTI WEF 8. The second show will be on Tuesday, March 5. The 2013 YHS Finals will once again be scheduled to take place at the PBIEC at the end of the year.

After a very successful 2012 season, Lourie thanked everyone involved. “We want to thank our sponsors. We had a significant increase in the number of sponsors that we have had this year,” she said. “We want to thank Equestrian Sport Productions that has really invested in these shows and I think they are going to see a return on that investment. We are getting excitement from the governing bodies, USEF and USHJA. We are starting to get legitimized and solidified and that is where we want to be. We have really achieved a lot in the two years that we have been doing this and we are very happy.”

On Thursday, the $10,000 Welcome Stake kicked off the week’s competitionwith a win for Amanda Derbyshire and Attack II. They were the fastest of three double clear rounds in an eight-horse jump-off. Alise Oken and Kaid Du Ry finished second. Liza Finsness and Ormsby Hill were third. 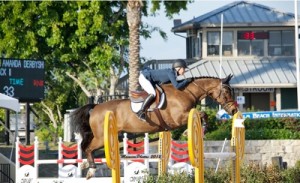 The hunters also held their competition this week and started out with the professional divisions and a sweep in the Conformation Hunters for Sandy Ferrell. Ferrell earned the divisions championship aboard Mariano and was reserve with Moshi, both horses owned by Stephanie Riggio. 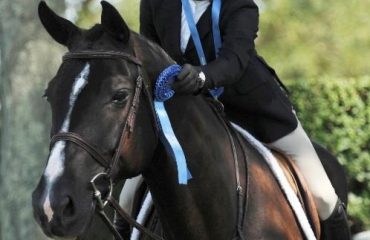 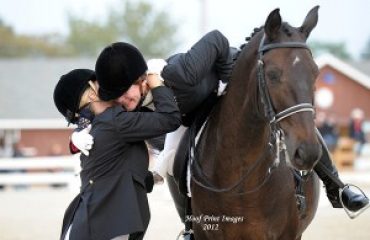 Dressage at Devon Day 3: Individual Breed Classes and the Start of the Performance Division 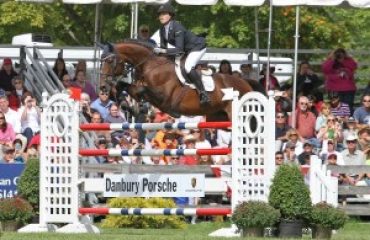