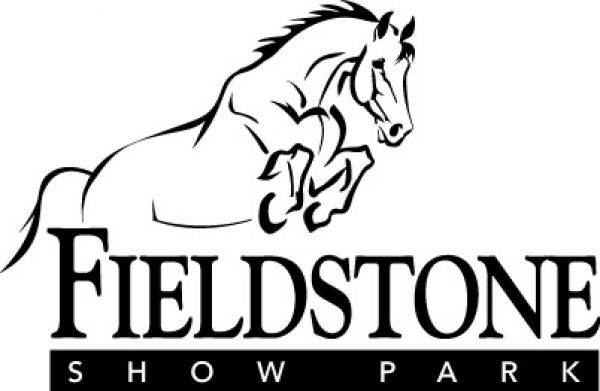 Halifax, MA – July 22, 2013 – The anticipation is building as the Fieldstone Summer Showcase starting date is drawing closer. The two-week competition will return to the Fieldstone Show Park from August 14 – 24, 2013. In addition to the world-class competition, the Fieldstone Show Park is pleased to announce their alignment with the Children’s Wish Foundation International. This reputable organization is dedicated to bringing joy and happiness to children with life-threatening illness around the world.  This dedication has created memorable experiences for children and families in 53 countries, and the Fieldstone Summer Showcase is thrilled to partner with them. 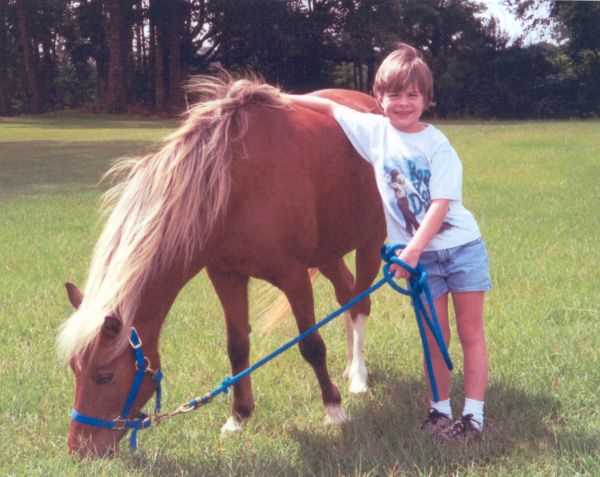 Andi, diagnosed with Wilm’s Tumor, wished for a miniature horse of her own to love and take care of.

Executive Director Linda Dozoretz pioneered the Children’s Wish Foundation International when she lost her eldest daughter to bone cancer. Dozoretz became an active fundraiser, supporting causes that searched for a cure for cancer. For her efforts, she was awarded a trip to Disneyland, which she donated to a little girl from Susan’s hospital who was also losing her battle with cancer. She provided a wish for a child who would never have the chance to grow up. Wishes for more children followed, and her community showed support by becoming actively involved in her efforts. With a determination to bring happiness to seriously ill children around the world, several years after that first wish Dozoretz formed Children’s Wish Foundation International and continues to serve as the organization’s Executive Director.

Papows was conducting an interview with Ian Millar about his relationship with Big Ben for Papows’ book Unbridled Passion, and Millar told him the most heartfelt story he could have imagined.

Andi, diagnosed with Wilm’s Tumor, wished for a miniature horse of her own to love and take care of.

It was Big Ben’s last class at Spruce Meadows, and as the pair was exiting the ring, Millar saw a family walking toward him with a young child in a wheel chair. Millar described the scene as “emotional” to Papows as he witnessed the eyes of the young girl light up at the sight of Big Ben. Her parents asked if she would be able to pet the horse, and Millar’s first thought was, “This is going to be a disaster, he’s like dancing dynamite right now.” He told them that although he would love to be able to allow it, it was just too dangerous; they would have to come back another time. The mother leaned toward him, and said, “She doesn’t have much time left.” 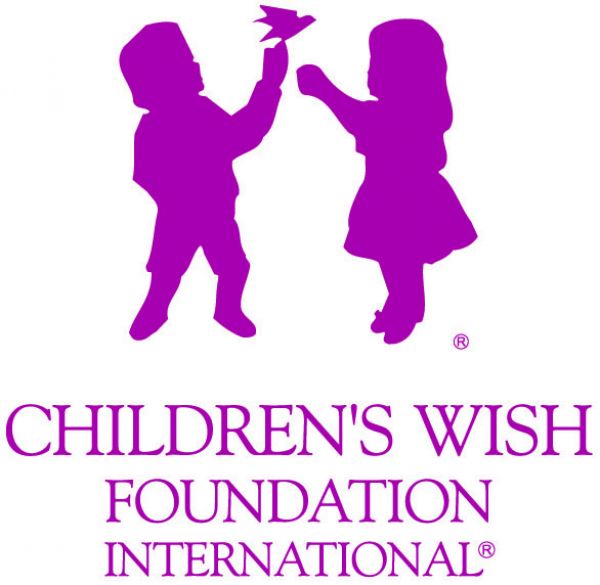 Against all odds, Big Ben lowered his head into the little girl’s lap, and she was able to pet him. The father then asked if she would be able to sit on him for a picture. Big Ben’s long-time groom, Sandy Patterson, assured Millar that Big Ben knew what she needed, and what he was supposed to do. With some help, they lifted the girl from her wheel chair and placed her in the saddle where she smiled boldly for a photograph. Big Ben stood perfectly still, and her final wish was made true.

Three weeks later, Millar received a letter in the mail telling him that the girl had passed away. Attached to the letter was the photograph. The letter explained that the picture sat in her hospital room until her passing, and her parents included the photograph with her burial. He had helped make a little girl’s dream a reality, and to this day, Millar still has the photograph from that fateful day.

“It was after hearing this story that I became interested in the Children’s Wish Foundation International, and I made them the recipient of the profits from my book,” Papows explained. “I eventually joined their Board of Directors, and connected Scott [Clawson] with the organization. We did several auctions for them last year, raising a lot of money, it was my idea to make them the official charity partner for the Fieldstone Summer Showcase, and Scott was more than happy to help an organization that helps so many terminally ill children.”

Children’s Wish Foundation International has been awarded the Independent Charities Seal of Excellence. The seal is awarded to the members of Independent Charities of America and Local Independent Charities of America that have, upon rigorous independent review, been able to certify, document, and demonstrate on an annual basis that they meet the highest standards of public accountability, program effectiveness, and cost effectiveness. These standards include those required by the US Government for inclusion in the Combined Federal Campaign, probably the most exclusive fund drive in the world. Of the 1,000,000 charities operating in the United States today, it is estimated that fewer than 50,000, or 5 percent, meet or exceed these standards, and, of those, fewer than 2,000 have been awarded this Seal.

Since its inception, the Children’s Wish Foundation has continued to expand its programs to enhance the lives of children with life-threatening illnesses. Recognizing the families’ needs outside of the scope of wish fulfillment, they stepped up their commitment to the children by developing a hospital enrichment program wherein they place educational and entertainment materials in children’s hospitals throughout the world. They also created a Family Focus program that allows the Wish Families a respite from hospital and treatments.

“I am thrilled to help such an inspirational organization,” Clawson said. “They have completed more than 35,000 wishes, and more than 300,000 hospital visits. They help children achieve dreams that would otherwise be impossible. It is with sincere pleasure that we welcome them as our official charity partner.”

CWFI, headquartered in Atlanta, GA, is an international Foundation, fulfilling wishes for children around the world, yet keeping costs to a minimum by maintaining only one office and a small staff. They take pride in providing personal attention to each family, developing and maintaining relationships with them that last years after their child’s wish has been fulfilled. To ensure that the families can reach someone at anytime, each staff member carries a cell phone, resulting in availability 24 hours a day. Additionally, they have the help of volunteers worldwide, allowing them to bring happiness to children in communities across the globe.

All wishes are fulfilled through the loving support of corporations and individuals who care about the happiness of the Wish Children. Individuals also give annually, or may choose to donate in lieu of a gift honoring a birthday, wedding, anniversary, or in memory of a loved one who has passed away. All contributions are tax-deductible. CWFI is a 501 (c) (3) nonprofit organization and all contributions are fully tax deductible as allowed by law. Tax receipts for all donations are provided.

Entries for the Summer Showcase will close August 6. Please contact Michael Morrissey for more information, including stall reservations. Morrissey can be reached at the office by calling (941) 744-5465 or on his cell phone (941) 915-3449. Questions and stall reservations can be faxed to (941) 744-0874. The prize list and entry blank are posted on www.ShowFieldstone.com and www.stadiumjumping.com.

For more information on Stadium Jumping and the approaching Fieldstone Summer Showcase I and II Horse Shows, please visit www.showfieldstone.com . You can also follow the Fieldstone Horse Shows on Facebook athttps://www.facebook.com/fieldstone.equestrian. 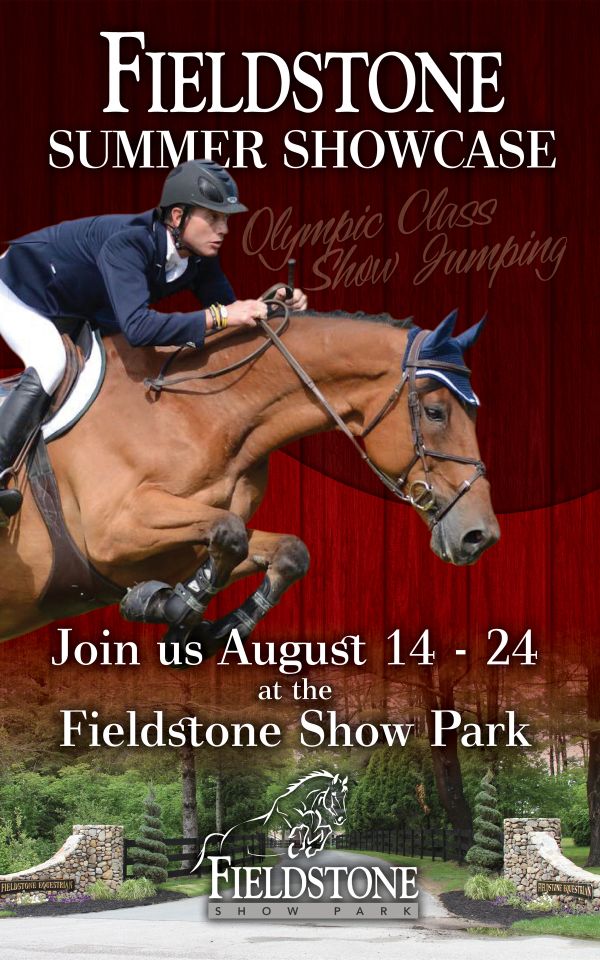 Photo Credit: The Fieldstone Summer Showcase prize list is now available online. Photo Courtesy of the Client.Photograph may be used only in relation to this PMG press release.

Events: 2013 Summer Showcase I and II

Animals: No dogs or other pets are allowed on the grounds unless they are leashed and under control. Unrestrained pets will be impounded and released only upon payment of fine,

From Route 3: Heading south or north take Exit 9(Rte. 3A, Kingston, Plymouth). Top of the ramp turn right on Rte 3A (towards Kingston). Through two sets of lights to a blinking light, bear left on to Rte 27-106. Travel about one mile to set of lights and fork. Take left at fork onto Rte 106. Fieldstone Farm is approximately 5 miles on the right in Halifax, MA.

The Grand Prix Field is grass. The Jumper Ring 5, Hunter Ring 1, Equitation Ring 2, Hunter Ring 4, Jumper Schooling areas and other schooling areas have Sand Euro Felt footing. The lunging area has a sand surface. The dimensions of the competition areas are as follows: 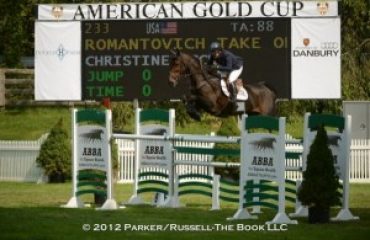 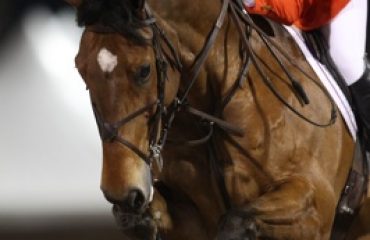 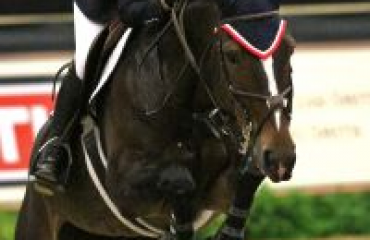