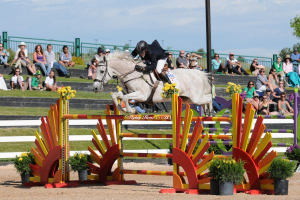 Pearce rode three entries, Chianto, Johnny B Good and Son of a Gun, and progressed to the short track on all. Susan Griffis and Palmer Divide Ranch’s Udine, Bjorn Ikast and Bovee Limited Liability Partnership’s Colorado, and Armando Hassey and Taggert Enterprise’s Eminem all left the rails in their cups in the first round to join Pearce in the jump-off.

“The course was a 1.45m,” said Pearce. “It was difficult to ride though. It forced us to do an inside turn to a triple bar which was quite difficult. Then, there was a forward line after the triple bar. There was a quiet distance to a pair of verticals and there was an oxer/oxer going away towards the in-gate. It wasn’t that big but it was quite scopey. It was good.”

Pearce’s first round in the jump-off was with Johnny B Good. The pair performed a solid clear round in a time of 46.050.

Griffis and Udine were ready to confront Pearce and his three horses. Last year, she followed Pearce in a number of victory gallops and she was prepared to pull out all the stops.

“I have to say I was chasing him (Pearce) a bit last year,” said Griffis. “I know how fast he goes. I thought to myself, ‘You know what – I am just going to go for it!’ It was bigger than I thought. There was a tight turn and there were two stout oxers. I landed and I saw an option of leaving two steps out instead of one but I decided to be a little more safe.”

With her time of 42.211, Pearce recognized that Griffis was a threat to the win. He stepped on the gas in his second jump-off round with Chianto and made around clear with a time of 40.593. Ikast and Colorado and Hassey and  Eminem both had two rails, putting them in fifth and sixth respectively.

“Susan Griffis was very fast- actually I was surprised how fast she was,” said Pearce. “So, I turned it on very fast with my second horse, Chianto. I had won the class, so I tried to be second on (his third jump-off round mount) Son of a Gun but he kind of tripped up over the second to last jump, so she just got me.”

Griffis describes Udine as a horse with an extremely adjustable stride that gives it all she’s got. The pair has been together for five years.

“She’s a Dutch mare by Voltaire,” Griffis said. “I got her when she was seven. I was having trouble staying with her in the air. I told the guy who was selling her that she’s hard to ride. He said, ‘Well it’s hard to drive a Porsche but you get used to it.’ She’s been a horse of a lifetime. She was the only mare in the class and I was the only woman. Go Girls!”

The partnership of Chianto and Pearce has produced an impressive list of prestigious grand prix wins. This is his fifth grand prix victory gallop just this year, plus, he was second in the AIG Million at HITS Thermal.

“He’s 17 this year and he’s going strong,” Pearce said about the big Chianto. “He’s like my Pegasus, you know. He’s gotten really, really solid as the years have gone on. We have a great relationship. He was quite difficult when I got him and it took a year to get to know him, but when he came around, he came around and never looked back.”

With Chianto, Pearce rarely practices over fences outside of the show ring. He says the horse just wouldn’t tolerate a highly disciplined program.

“I keep him happy,” Pearce said. “I try to turn him out and hack him in the countryside. He’s got a good life. He spends a lot of time outside. When he goes to the shows he’s ready to spit fire. When you fire up the truck he whinnies. He likes to compete.”

Both Griffis and Pearce are looking forward to competing at the ColoradoHorsePark for the upcoming weeks of Summer in the Rockies.

“I appreciate that they’re really working hard and putting a great effort into the footing and the facility,” Griffis said. “I really want to thank Helen Krieble and the Coors family. I appreciate so much what they’ve done for the HorsePark and for Colorado.” 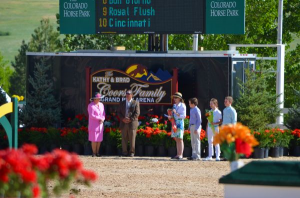 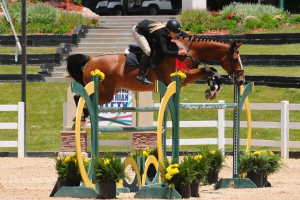 Celebrating its 20th Anniversary, the ColoradoHorsePark was founded by visionary Helen Krieble who acknowledged the need for a high-volume horse show and horse boarding facility to serve Colorado.  The ColoradoHorsePark welcomes more than 75,000 visitors per year and hosts over 40 competitions annually.  CHP features a derby arena designed by Olympic-designer Linda Allen and a cross-country course designed by Olympic Gold Medalist David O’Connor and eventing super-star James Atkinson. There are 300 permanent stalls with capacity for more than 1,000 stalls.

The picturesque property, located only minutes from the town of Parker, hosts international equestrian events in multiple disciplines. Visitors enjoy the beautiful ColoradoRockyMountain surroundings and access to miles of trails and open space.  The ColoradoHorsePark iscommitted to supporting equestrian education and amateur athletics, preserving open space, fundraising for local charities and supporting the community. 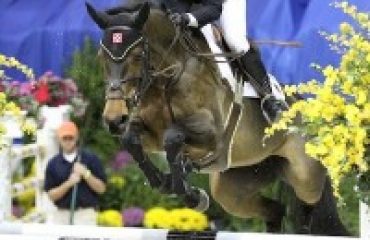 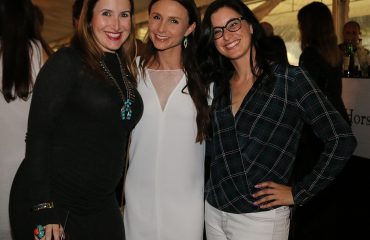 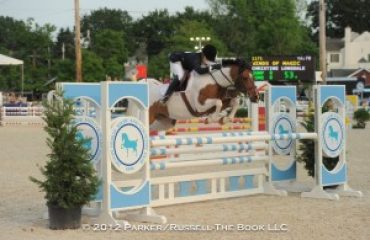