The course designer in the International Arena for week three competition is Uliano Vezzani of Italy. In Thursday’s $33,000 Ruby et Violette WEF Challenge Cup Round 3, Vezzani saw 58 competitors with 13 advancing to the jump-off. Over the short course, only five riders were able to clear the track without fault. Katie Monahan-Prudent and V, an 11-year-old KWPN gelding by Landstreicher x Lennard, raced through the course in 34.99 seconds for the win. 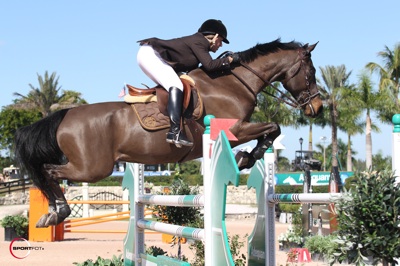 Kristen Vanderveen (USA) and Bull Run’s Eternal finished in 35.36 seconds for the second place prize. Lauren Tisbo (USA) and Roundthorn Madios stopped the clock in 35.86 seconds to place third. Great Britain’s Tim Gredley and Unex Omega Star, owned by Unex Competition Yard, were fourth in 35.87 seconds, and Fernando Cardenas (USA) and Quincy Car placed fifth in 36.01 seconds. Peter Wylde (USA) and The Wannahave Group’s Sandor de la Pomme had the fastest round of the day in 33.32 seconds, but a rail at the last fence put them into sixth place.
Monahan-Prudent has had V for a year and a half and has formed a great partnership with the gelding. The pair also won the $8,000 G&C Farm 1.45m jump-off class during week two of the FTI WEF and will continue on this week in the $50,000 CSI 2* Grand Prix on Sunday.
“He is a very brave, aggressive horse,” the rider said of her mount. “He was a little hard for me to control in the beginning and I have worked hard with him. He is starting to relax and listen better and trust me. I think this is going to be a good year for him. He has been very consistent.”
Speaking about her rounds in the class, Monahan-Prudent emphasized, “He is really listening better. There were some tests in there that were hard for him. Like the vertical-oxer-five strides-oxer-vertical. I had to chase him a little and sometimes that makes him very excited and I can’t control him after that, but I thought he jumped that line beautifully and he came right back and rode beautifully the rest of the way. I was proud of him. He did everything I asked him, he didn’t fight me at all and he is a very careful horse and a very capable horse if he is in the right mind set.”
Detailing where she made the best time in the jump-off, the rider added, “He doesn’t have the biggest stride in the world, so from fence one to two the leave out was seven strides and most people just cantered it – I galloped it. I also made a special effort when I landed from the second fence to fly into that turn and then everything else I think was about the same as everybody else’s. I think one to two to three in the jump-off is where I was faster.”
Monahan-Prudent has a busy schedule teaching many top riders such as young Olympian Reed Kessler. She has had a lot of wins in her career and now focuses a lot on her students, but admits that is always nice to get a win for herself.
“It is always nice to win and it has definitely been awhile since I won one of these classes,” she stated. “It’s been about 12 or 13 years since I’ve had a really good horse and it feels great to win. We are always plugging away. You never say die; you keep trying.” 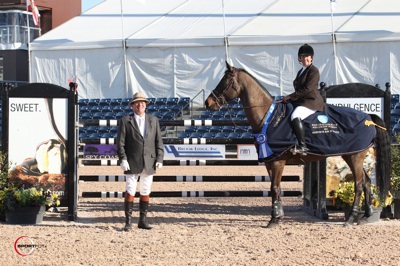 It will be a busy circuit for the next nine weeks in Wellington and then on to the rest of the season. As far as plans for showing this year, Monahan-Prudent goes where her students go.
“For me now, I set my plan based on my students and with Reed being my top student and Abby McArdle also coming along, I make a plan after Florida and I just want to keep up with my students,” she noted. “If we go to Calgary I want to be there showing and if we go to Europe I want to be there showing, so that’s my plan.”
Kessler was also in the jump-off with her horse Onisha in Thursday’s class and although they like to compete, the student and her teacher always cheer each other on.

“We are both very competitive and I know she wants the best for me and I want the best for her,” Monahan-Prudent stated. “If she had been leading I would try to beat her in the same. With me leading she tries to beat me, but we are for each other as well.”

Along with the prize money for Thursday’s class, a $6,000 rider bonus for the SSG “Go Clean for the Green” contest was also up for grabs as last week’s winners did not have SSG ‘Digital’ gloves, but Monahan-Prudent was unfortunately missing one of her gloves for today’s class. The bonus has not been won in two weeks now, so $9,000 in bonus money will be offered next week in the $33,000 Ruby et Violette WEF Challenge Cup Round 4. The bonus goes to the winning rider if they are wearing the SSG ‘Digital’ Riding Gloves in all rounds of competition with the SSG logo clearly visible.

Sons Souci and Havens Schatt earned championship honors in the Equine Tack & Nutritionals First Year Green Hunter division during week three of the FTI Consulting Winter Equestrian Festival (FTI WEF). This will be the third week one of Schatt’s mounts has collected championship titles. Caroline Moran’s Bacardi, ridden and trained by Schatt, has been division champion weeks one and two at the FTI WEF. Schatt and Sons Souci, a ten-year-old Warmblood mare owned by CH Farm LLC, earned high scores over two days of competition both over fences and under saddle. The pair was second and seventh over fences and second under saddle on day one, followed by first and third places over fences on day two of competition for the division.

Reserve champion of the division was Mythical, ridden by Kelley Farmer and owned by David Glefke and Dr. and Mrs. Kenneth Garber. Farmer and Mythical were first and third over fences day one before placing second in the over fences stake round on day two. 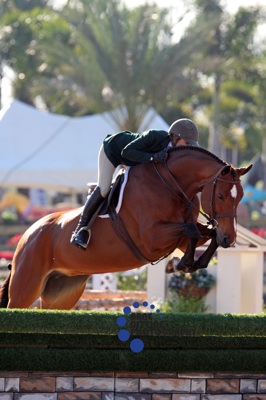 The FTI WEF marks Sons Souci’s first season competing in the First Year Green division, but Schatt feels she is settling in nicely. “I did [First Years] week one [of the FTI WEF] and she was jumping the top of the standards! So we went home and did a little practicing. Yesterday, in the Green Conformation I did for practice, she was still a little leery of what was going on. And then she was second and seventh, but seventh with an 85, yesterday and today [scored] 88 and 89 right from the beginning. She was super,” Schatt stated.

Although geldings are usually favored for having a more even-keeled temperament than their female counterparts, Schatt has nothing but praise for her sweet mare’s disposition. “My program is we take our time with horses. For me, I deal with her just like I would deal with a gelding. She’s not mean to the other horses, she’s just really sweet,” Schatt stated.

“I think some people would call her more sensitive, but she’s not really. You get on, and she gives you that feeling like ‘I can’t move, I can’t do anything.’ But if you take her mouth and put your legs on, in two minutes she’ll do whatever you want. She rides amazing and she’s really well broke,” Schatt continued.

Schatt also loves the sensitivity that Sons Souci’s has and the extra blood that helps make her a better jumper. “A lot of people might think [she’s got] a little too much blood for a hunter, but I really like it. She jumps like these jumps are nothing and she’s got so much scope,” Schatt stated.

In the upcoming weeks of FTI WEF, Schatt will be back with both of her champion mounts, Sons Souci and Bacardi. “I have to try to not show them against each other,” Schatt stated. “I’ve been waiting for six years to have a good horse for First Years, and now I have two! I didn’t ever think I’d have that problem, but I guess it’s a good problem to have!”

Week three of hunter competition at the FTI WEF continues Friday with the Adult Amateur 18-35 Hunters in the Rost Arena. The RCG High Amateur-Owner Jumpers will be featured in the International Arena. For full results, please visitwww.showgroundslive.com. 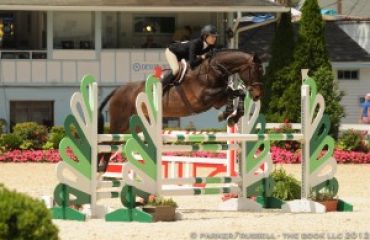