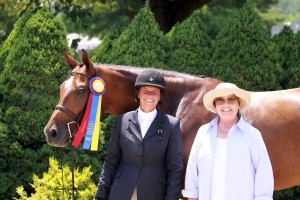 Jennifer Alfano guided Maggie May to the High Pre-Green 3’3″ Hunter Championship. Alfano and owner Billie Steffee are presented with the tricolor award. (Photo by Anne Gittins)

It was only about a year ago that Maggie May first began to make her mark in the hunter ring with Alfano in the irons. The young mare has shown nothing but success since her debut at the Kentucky Summer Series in 2011, winning numerous championships. The Chagrin Valley Hunter Jumper Classic bore witness to Maggie May’s talents in the hunters, with the mare catching the judges’ eyes and scoring two blues and the fourth place over fences, as well as the first place in the under saddle. The pair eventually was presented with the High Pre-Green 3’3″ Hunter Championship.

“Maggie May has come so far,” Alfano beamed. “It was actually last year, when we were here, that we first heard about her. I tried her the week after the show, and we saw potential in her that has matured so much. She has come so far, even at the beginning in Florida she started very green, but she is really a show horse now.”

“She is such a good jumper, it is honestly so beautiful to see and also to be able to feel when we are out there. She has gotten so rideable and it is just a really nice picture,” Alfano elaborated.

The talented Rapunzel, owned by Karen Macdonald, took home the First Year Green Hunter Championship, as well as the Chagrin Valley Hunter Jumper Classic Grand Championship. Alfano and Rapunzel were awarded with two first place ribbons and the second place ribbon in the over fences. They also posted the highest score in the handy round, earning the blue ribbon prize. Their efforts in the under saddle also warranted a first place finish.

Danny Robertshaw’s Lions Paw left his mark in the Regular Conformation Hunter division with Alfano guiding the way. The thoroughbred gelding earned first place in the model, three first place ribbons and one second in the over fences, as well as the second place ribbon in the under saddle.

Alfano continued to exhibit her mounts to the top of the leader board, including Montenegro, owned by B&B LTD. The duo was awarded the Second Year/High Performance Hunters Reserve Championship. He took two firsts in the over fences, as well as an additional two thirds. They also were awarded the second place ribbon in the under saddle.

Miss Lucy dominated the $10,000 USHJA International Hunter Derby on Saturday, July 14. She came out on the top, with beautiful rounds and perfectly cleared high options. Her scope and pace brought her to the forefront of the competition with ease. Jersey Boy took the second place spot only a few points behind Miss Lucy, while Lions Paw earned the tenth place position in his second derby, ever.

“Lucy was unbelievable. She jumped both rounds absolutely fantastic. She could not have been any better,” Alfano described. “Jersey Boy did a great job, too. He always does great, but this time it was Miss Lucy who caught everyone off guard. She has come in second to ‘Lewis’ a few times now, and she just jumped so outrageous that it was unbelievable.”

Katherine Karrer and Contifax proved themselves in the Performance 3’3″ Hunter division. They took the first and fourth place finishes over fences, and also earned good ribbons in the Amateur-Owner 3’3″ Hunters. Jessica Litfin and Serenade took two seconds and the third in the Adult Amateur 18-35 Hunter Over Fences, as well as the second place in the Ariat National Adult Medal.

Luke Olsen and Montenegro showed to good ribbons in the Large Junior 16-17 Hunters. They earned the second and fourth place ribbons over fences. Aboard Dragon, owned by Redfield Farm, Olsen took the fourth place in the hunter phase of the WIHS/NAL Medal, as well as the eighth place finish in the jumper phase for the overall fifth place prize.

SBS Farms will continue to show throughout the second week of the Chagrin Valley Hunter Jumper Classic, and then the team will take a few weeks to rest and refresh before the Bluegrass Festival Horse Show in Lexington, KY. Everyone is looking forward to the upcoming $100,000 USHJA International Hunter Derby Finals in August. 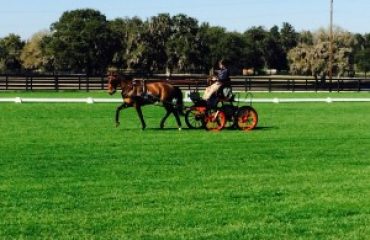 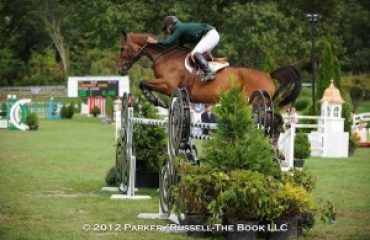 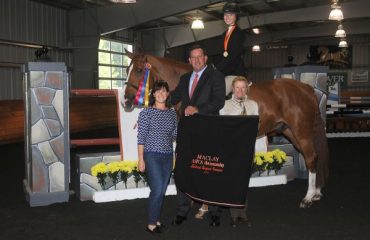