Take in “Saturday Night Lights” from some of the best seats in the house! Tables and individual seats are available for sale in The Wellington Club, which offers a fantastic view of the International Arena for Saturday night’s grand prix. Enjoy a full buffet courtesy of White Horse Catering while watching thrilling competition from a spectacular vantage point on Saturday, February 22. Tables are going fast, so reserve yours today! Email vip@equestriansport.com for complete information.

Week seven kicked off its competition on Wednesday with the $34,000 Spy Coast Farm 1.45m as the highlight class of the day in the International Arena at PBIEC. Fredric Cottier of France is the international course designer this week and set the speed track for 85 competitors in the class with 29 clear rounds. Fifth to go, Shane Sweetnam and Spy Coast Farm LLC’s Cyklon 1083 set the unbeatable pace of 59.10 seconds. 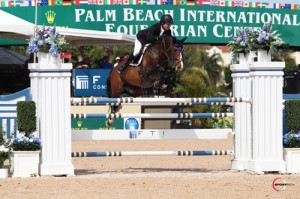 Germany’s David Will and Black Jack 163, owned by Eveline Kraus, finished second in

Wednesday was the third trip to the winner’s circle for Sweetnam and Cyklon at this year’s FTI WEF after also winning the $34,000 G&C Farm 1.45m speed classes during weeks three and five. The 13-year-old Swedish Warmblood stallion (Cardento x Cortus) has been a consistent top horse for Sweetnam and continues to excel.

“He is very consistent, and he has improved each year since I have gotten to know him better,” Sweetnam stated. “I know his little quirks and things now. He was very good last circuit here as well and obviously he is having a great run at the moment.”

“He felt great today,” Sweetnam said. “The last class I did with him he won two weeks ago, and he had last week off, so he felt fresh. I was early to go and I wasn’t really sure if my time would hold the whole way because you know when you go early in this class, there are a lot of good riders and good horses, so I was very happy today at the end to still be on top.”

Sweetnam explained that although he would prefer to go later in the order to be able to watch more rounds, his round would not have been much different today.

“It’s nice to watch to know what you have to do,” he noted. “The last class that I won I was later to go, so I knew exactly what I had to do, where this one I am really taking chances and risks and sometimes they don’t come off. You can be a little bit more careful if you are later in the class, but my plan didn’t really change. I would have probably still had to do the same as what I did to win the class.” 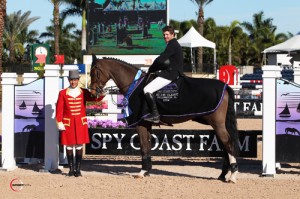 Shane Sweetnam in his winning presentation
with ringmaster Gustavo Murcia

Sweetnam and Cyklon have been a winning partnership for two years now with top finishes around the world, and the rider recalled that the last time Cyklon jumped one of Fredric Cottier’s courses last year in La Baule, he won.

“He is a very good course designer, and the course was good today,” Sweetnam acknowledged. “The top 10 or 12 were all within a few seconds of each other, so the rollbacks had to be tight and then if you were to leave out a stride in places, that was going to play an advantage. I think that is what worked for me. I left out a stride from jump two to three and then from four to the in-and-out, and then even the last line. Not everyone did five strides there and I did five. I think if you were leaving out strides, it was going to help you win today.”

A $6,000 Spy Coast Farm 1.40m speed class was also held on Wednesday with a California Split for the placings due to the large number of entries. Pedro Muylaert (BRA) and Wessel, owned by Henrique Tielas, had the fastest clear round to earn top honors in Section A of the class. Daniel Zetterman (SWE) and Springfield Showjumpers’ Jolly Joker were the winners in Section B. A $6,000 Spy Coast Farm 1.40m jump-off class concluded the day with a win for Joao Victor Castro (BRA) aboard Wamira.

Week seven of the 2014 FTI Consulting Winter Equestrian Festival will continue on Thursday with the $125,000 Ruby et Violette WEF Challenge Cup Round 7 in the International Arena. For full results, go to www.showgroundslive.com.

Photo Credit: Photos © Sportfot, An Official Photographer of the FTI Consulting Winter Equestrian Festival, us.sportfot.com. This photo may be used only in relation to this press release and must include photo credit. 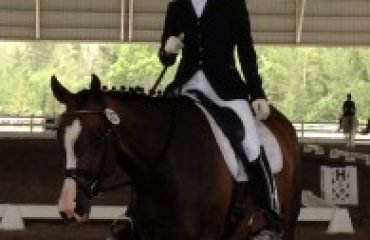