Wellington, FL – February 1, 2014 – Canada’s Ian Millar, Kelly Soleau and Emily Kinch were the winning team in the fifth annual FTI Consulting Great Charity Challenge presented by Fidelity Investments® (FTI GCC) on behalf of their charity, Speak Up for Kids, on Saturday evening at the FTI Consulting Winter Equestrian Festival (FTI WEF). Sponsored by Lothlorien and corporate sponsors Bass, Bolfo, Newlands and Rowland, the three riders made up the top team of the night out of 35 pro-am combinations paired with Palm Beach County charities.

A signature event of the twelve-week FTI Consulting Winter Equestrian Festival, this year’s FTI GCC will distribute approximately $2 million to the lucky Palm Beach County charities that were chosen at random to be represented in the pro-am team relay competition. Each team was made up of junior and amateur riders competing side by side with top professionals.

In addition to the FTI GCC competition, the evening featured a concert by four-time Grammy Nominee Hunter Hayes. The fans flooded the stadium to enjoy the family fun event and amazing entertainment as part of the “Saturday Night Lights” series at the FTI WEF. 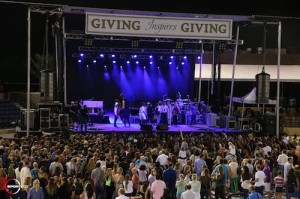 The winning charity, Speak Up for Kids, raises needed funds to support the efforts of the Palm Beach County Guardian ad Litem Program to recruit and train GAL volunteers, train volunteers and staff, and provide needed program and family support, so that all abused, abandoned, and neglected children will have a voice in court – someone who will speak for them, stand up for them, and follow through on the case until it is permanently resolved.

Gregg Weiss, treasurer and founding member of Speak Up For Kids, spoke about the exciting win for his charity on Saturday night, a win that will double the organization’s fundraising efforts this year.

“We are very, very pleased that we had the opportunity to participate in this event, and we are very pleased that our team came in first place,” Weiss remarked to his winning team of riders. “Speak Up for Kids supports a guardian ad litem program. In Palm Beach County we support over 1,700 children, and we raise money to make sure every child has a voice, and every child is heard. For the work that you all did tonight, it is going to make a big difference in their lives. It is life changing for so many people, so thank you, thank you, thank you. Thank you to Kristin Solomon and Diana Reese for all of their hard work for Speak Up for Kids. It was a team effort from not only your team, but from ours.”

Kristin Solomon detailed the Speak Up for Kids program, explaining, “The guardian ad litem program is a state agency that represents abused, abandoned and neglected children that are in an open court case, and we are appointed by a judge to help their best interests throughout the whole process. This is a volunteer organization. In Palm Beach County alone there are over 500 volunteer child advocates that give children a voice in the court system. I only have 30 employees, the rest are all volunteers that do all of the work. Statewide we have almost 10,000 volunteer child advocates, so this money goes directly to support the volunteers right in this community.” 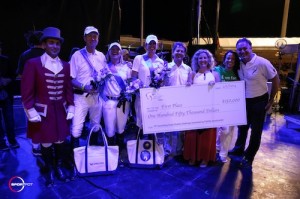 Ten-time Olympian, Ian Millar, captained the winning team with riders Kelly Soleau and Emily Kinch. All three riders jumped clear over their courses and had the fastest combined time of the night in 93.107 seconds to win the top prize of $150,000 for their charity. There is a sliding scale for the balance of the proceeds down to 35th place, which wins $15,000, ensuring that everyone is a winner.

Coming in second place was the team for Wellington PTO/PTA/PTSA, sponsored by EnTrust Capital and Rose Hill Farm as well as corporate sponsor Rosenbaum Mollengarden PLLC. The team consisted of Ken Berkley, Cloe Hymowitz, and Lilli Hymowitz, who all cleared the course with a combined time of 95.056 seconds to earn $125,000 for their charity. 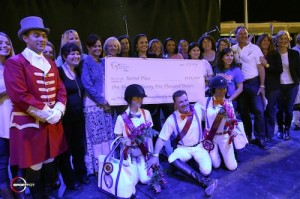 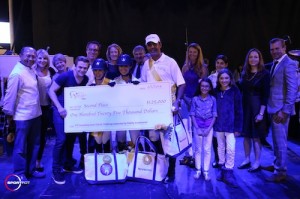 Ian Millar was aboard his mount Baranus this evening, an 11-year-old Oldenburg gelding. This was Millar’s first time competing in the FTI GCC and he was proud to represent team sponsor Lothlorien for his owners, Susan and Ariel Grange. Millar was also very happy to ride for such a great cause.

“It was a great pleasure to do it, and when we finished our round, I can’t tell you the pleasure I had,” Millar smiled. “It is a very enjoyable and rewarding class just because of the situation. I mean, winning Grand Prix is great, but this is different. This is special. To do this for a group like Speak Up for Kids, where they look after 1700 children in Palm Beach County and to hear that this doubles their annual revenue, it’s a big deal. This will be life changing for this charity. It is really a very nice thing to be able to help this charity, and we are very proud to do it.” 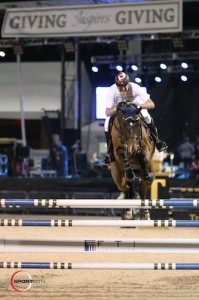 Soleau rode a horse named Hoolie Hoo, and was very happy with her round aboard the speedy mare. “She was actually a borrowed horse for this event,” Soleau stated. “A lovely family that owns the horse very kindly let me borrow her. I’ve only shown her a handful of times, and she was just fantastic. To ride for this charity was such an honor. I’m just beyond thrilled for everybody.”

Soleau has competed in the FTI GCC before and was excited to be back in the competition this year and to win for her charity.

“It’s just fantastic,” she smiled. “I was in it a few years ago. I believe I was involved in one of the first ones they did, and I get excited every year. It is just fantastic for all of these charities. It was really an honor to be able to ride and compete and win tonight.” 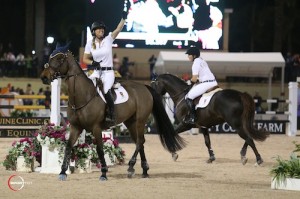 Twenty-year-old Emily Kinch led things off for her team this evening and set a very fast pace aboard her horse, New Boy de Logerie. Kinch, originally from Barbados, trains with the Millar family and now resides in Canada.

“I was on my new horse that I got over Christmas holidays, and he was pretty spectacular tonight,” Kinch praised. “Every question I asked, he did it. He was perfect.”

Kinch rode in last year’s FTI GCC riding a mare named Victoria and “had a ball.” She was happy to return to the competition this year and get a win for Speak Up for Kids.

“It meant a lot because when I think of a charity, the first thing that comes to mind is helping children,” Kinch stated. “To have Speak Up for Kids as our charity tonight, that was first thing in my mind.” 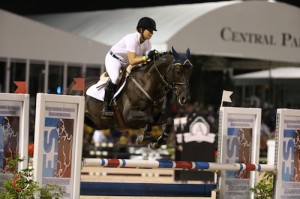 Everyone was thrilled with this year’s fantastic event, including presenting sponsor, Fidelity Investments®.

“I just want to thank this team and the dedication of everyone for giving their time and energy,” Bellissimo stated. “This is a big gesture. The owner doesn’t get the money and the rider doesn’t get the money; the charity gets the money, and it will touch 1700 lives. It is rare that you get that opportunity. I think if you add up the impact of all of the charities and you look at all of the lives we touched tonight, we are going to touch 10,000, maybe 12,000 lives based on the selflessness of some riders and I am so excited about that. This event was created to find heroes in the community, and I think we found some here. I can’t think of a better group to pull it off, and I am thrilled with what happened here tonight. It is very exciting for us.” 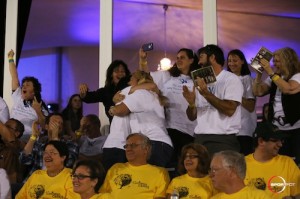 Charities cheer on their teams during Saturday night’s event

Melissa Groher of South Glastonbury, CT, may have only been at the FTI Consulting Winter Equestrian Festival (FTI WEF) for the weekend, but she certainly made it count. Groher finished first in the Ariat National Adult Medal on Saturday afternoon during the fourth week of competition at the FTI WEF.

The top four riders were called back into the ring for the test. Groher and Logan, a six-year-old Dutch Warmblood gelding, had a first round high score of 86 before riding to the top of the class. Second place went to Rachel Boggus, who qualified with a first round score of 81.5 aboard Papillon 134. Elizabeth Kirby and Validation finished third after scoring 83 in the first round and Groher’s sister, Amanda Groher, was fourth with Castelano and a score of 82.

The test called for riders to approach a trot jump directly from the in-gate and canter a single oxer before coming back to the skinny vertical that plagued many first round riders thanks to a short approach in the original course. From there, riders cantered to the judge’s stand, where they were asked to halt and back four steps before exiting the ring at the sitting trot. 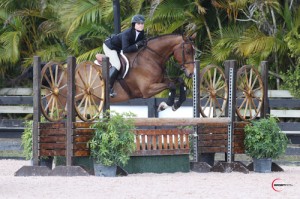 Groher wasn’t nervous going into the ring with Logan, despite never contesting the Ariat National Adult Medal at a show of the FTI WEF’s caliber.

“We’re just here to have fun and Logan’s awesome, so I knew it would be fun going in there,” she smiled.

Logan may be young at only six years of age, but 24-year-old Groher has been thrilled with her borrowed mount.

“Logan is my trainer, Kyla [Makhloghi’s] horse. He’s so much fun. He’s always right under my leg and there for me, so he’s a good boy. For a six-year-old, he’s amazing. He does all the hard stuff easily,” Groher explained.

When asked what made Logan particularly apt for the equitation ring, Groher continued, “He’s so adjustable. He turns on a dime and he’s really in tune to my leg, so it’s really easy to just look where I’m going and he can feel it out himself.”

Groher saved up her vacation days and took the week off from her job as an advertising sales assistant at House Beautiful Magazine in New York City to compete at the FTI WEF with her sister. The two made the most of their trip to Wellington and were happy to have the opportunity to fly south to the Florida sunshine.

“My sister and I ride together, and now that we’re adults we don’t have our own horses. Linda Langmeier is amazing and lets us have really great opportunities [by giving us horses to ride] when we don’t have a horse, so it’s really fun and exciting to come down here for a weekend,” Groher remarked.

Of sharing riding with her sister, Groher detailed, “It’s amazing. We’ve both been riding since we were babies. My mom grew up riding, so she taught us in the beginning. It’s a passion we share, and we both get along so well. We work hard together, and it’s really awesome that we can do it together.”

Hunter competition for Week 4 concludes on Sunday with the Antares Large Junior Hunter 16-17 division in the E.R. Mische Grand Hunter Ring.Jumper competition concludes with the $50,000 Ariat® Grand Prix CSI 2*, which will be held at 2 p.m. on the grass derby field at The Stadium at PBIEC. For full results, please visit www.showgroundslive.com.

Photo Credit: Photos © Sportfot, Official Photographer of the FTI Consulting Winter Equestrian Festival, us.sportfot.com. These photos may be used only in relation to this press release and must include photo credit. 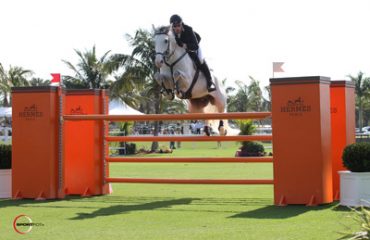 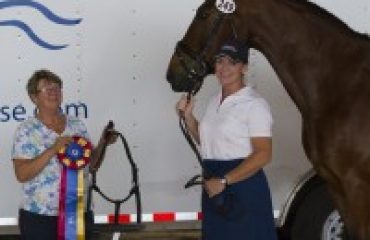 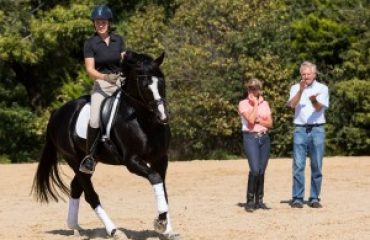