(SPRUCE MEADOWS, Calgary, AB): The Spruce Meadows Summer Tournaments continue this week at the ‘Canada One,’ held June 25-30. Today was full of team competition and camaraderie, with the Paramount Resources Prix des Nations competitions held for junior and amateur riders at levels 1.10m-1.40m. There was also a 1.00m Friends of the Meadows Prix des Nations.

The tournament wraps up on Sunday with the $100,000 Esso Challenge, the third FEI World Cup qualifier to be held at Spruce Meadows this summer. Admission and parking are complimentary for the ‘Canada One’ Tournament.

This was the 14th year that the Paramount Resources Prix des Nations have been held and they offer a fantastic opportunity for junior and amateur riders to experience team competition, which is not often found at show jumping events in North America.

Caitlin Ziegler, a member of the 1.40m Prix des Nations winning team who has ridden in the competition three times, stated, “It’s so much fun just to be able to have a group who really get together and support each other. It’s a chance to experience what a Nations Cup is. The sport is so competitive (and) it often sets people against one another, so it’s great to have a chance to work together toward something.”

The winning team of the $10,000 Paramount Resources Prix des Nations 1.40m showed poise and rode to all-important clear rounds when it counted. Led by Chef d’Equipe Nick Dello Joio, the America Team notched three clear rounds and did not have to send their anchor rider in for the second round. They had six faults in round one to lead and added just four in round two to take victory. 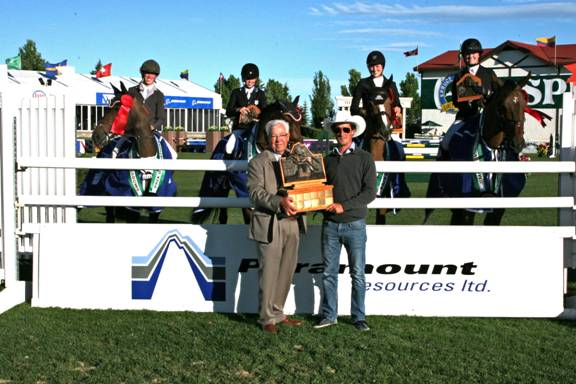 Ziegler explained the team’s plan for round two, “Coming into round two, the teams were at six, seven, and ten (faults), and they were all within one rail. What we wanted to do is have everybody be at least as good as our first round, if not better, and eliminate our time faults. I think we all managed to do that, so it was great.” 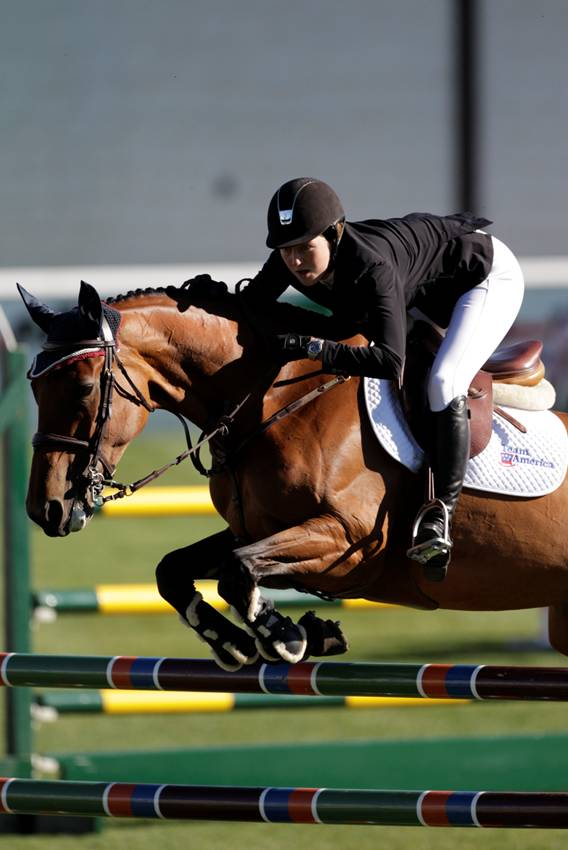 Having ridden Butragenia for three years, Ziegler knew she would do well in the Prix des Nations. “She’s fantastic for these High Junior and Amateur courses. She’s a horse you can really count on. In a class like this where you need two clear rounds, she’s perfect for it,” she said.

The “America” team donated all of their prize money to the Calgary Flood Relief to help the area after the terrible flooding in the city and surrounding areas. Ziegler expressed, “The last week has been really devastating for Calgary. It means so much to us – not just Spruce Meadows, but the entire city and community here is so supportive. We want to do whatever we can to give back and help them through this.”

The second place team was Chafing the Dream with Chef d’Equipe Dick Carvin, who finished on 17 total faults. They were led by a double clear performance from Bretton Chad (CAN) on Tjengo. Kara Chad (CAN) and Oura de Rouhet had five and one faults, while Alec Lawler (USA) and Acoradus scored eight and 13. Vani Khosla (USA) and Dynamo had five and six faults.

The JMSCBK Team with Chef d’Equipe Sarah Segal were third with a total of 23 faults. Lead-off rider Katherine Strauss (USA) and Capacity had eight and four faults, Isabella Salles (BRA) on Angel Rose had five and 19, Francesca Bolfo (USA) and Lalique were clear in the first round and had seven faults in the second round, and Wesley Newlands (CAN) rode Lapacco to two and four faults.

The $7,500 Paramount Resources Prix des Nations 1.30m was very exciting competition full of clear rounds that helped four teams tie on a zero score after two rounds of jumping. Those four teams then chose a representative to compete in the jump-off.

Leading off was Maria Costa (USA) on Reno for The Fighting Irish team, who were guided by Chef d’Equipe John Roche. They were clear in 31.583 seconds, which would finish in third place. Costa was double clear in the first two rounds, as was her teammate Wilton Porter (USA) on Punch. Wilton’s brother Lucas rode Patriot to scores of zero and five, while Sarah Kerins and (USA) and Hot Wheels contributed one time fault and were clear.

The margin for victory in the competition was extremely slim, with the winners, Team San Lorenzo, taking the top spot by only 3/10ths of a second. The win was gained by Beatriz Franco Sol (MEX) on La Guayaba, a horse she has ridden for five years. They were also clear and just a bit faster in 31.273 seconds. 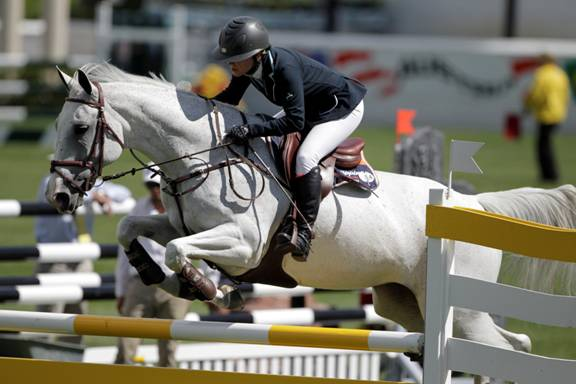 The San Lorenzo Team was led by Chef d’Equipe Antonio Maurer. Alejandro Pascencia (MEX) and Sultan de la Nutria were double clear, as were Jacobo Martinez (MEX) and Queens Darling. Claudia Lorenza O Farrill (MEX) and Etoile van den Bisschop had four faults in round one and then returned clear.

Second place in the 1.30m Prix des Nations went to the Thirty and Flirty Team with Chef d’Equipe Kent Farrington. His student, Meagan Nusz (USA), rode Willow in the jump-off and finished just off the pace with no faults in 31.580 seconds. Nusz did not have to show in the second round either since her team were all clear. Abigail McArdle (USA) and Quality were double clear, as were Alex Crown (USA) and Quadrant. Teri Kessler (USA) contributed a second round clear after nine faults in the first round.

Last in the jump-off was Katherine Strauss (USA), who rode Chellando Z. They had four faults at the last jump, and their team, Madden Madness with Team Chef d’Equipe Jennifer Griffiths, were fourth. Strauss was double clear in the first two rounds, as were her teammates Isabella Salles (BRA) on Carlos H and Wesley Newlands (CAN) on Wieminka. Genevieve Meyer (USA) and Coral Reef Santos Utopia had four and eight faults.

This was Franco Sol’s second time riding in the Prix des Nations competition. “I really did think we had a good chance of winning. It was a good team and everybody was really all together. It’s really nice to win, and I hope everybody is happy!” she expressed. 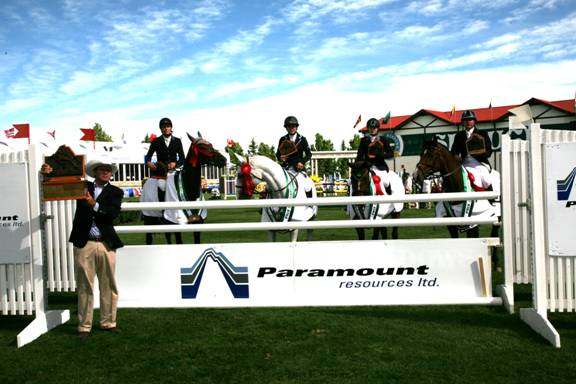 The $5,000 Paramount Resources Prix des Nations 1.20m came down to one fault for the winning team. Going in as the anchor rider, Katherine Strauss (USA) on Urginia had to be clear for her team to win. She did just that, leaving the Madden Magic team, led by Chef d’Equipe Ann Karrasch, on a final score of zero. Strauss did not have to show in the first round since her teammates were all clear. Also on the winning team was Isabella Salles (BRA) and Umora (0, 0 faults), Genevieve Meyer (USA) on Coral Reef Casello (0, 4), and Gwendolyn Sontheim Meyer (USA) with Coral Reef Fundskerl 3 (0, 0). 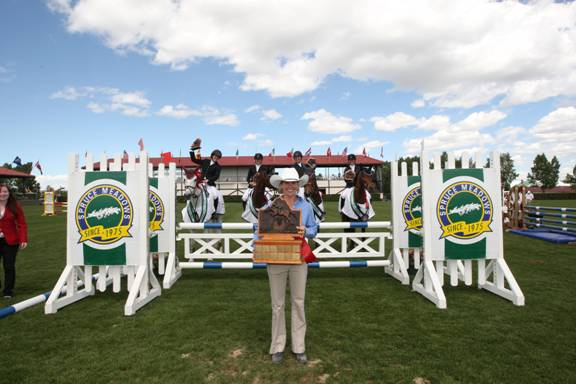 Second place with just one total fault was Bob’s Babes, named for Chef d’Equipe Bob Henselwood. Their riders were Ali Ramsay (CAN) on Alonzo (0, 0), Jaclyn Duff (CAN) and Caesar (1, 4), Jillian Halina (CAN) on Coupe Champagne (0, 0), and Skylar Edmonds (CAN) with Boomer (elim, 0).

In the $2,500 Paramount Resources Prix des Nations 1.10m, there was another four-way jump-off to determine the winning teams after three were tied with zero faults after the first two rounds. First in and taking the win was Shelby Edwards (CAN) on Adelaide. They were the only clear round in the jump-off, finishing in 34.17 seconds to help their team to victory. Edwards rode for the Xtreme team, with Chef d’Equipe Trish Mrakawa. They were double clear in the first two rounds. Also on the team were Ally Memedovich (CAN) on ARK Diamond (0, 0 faults), Kirsten Spence (CAN) and Jetsetter (8, 8), and Chantelle Moore (CAN) with Montenero (0, 0). 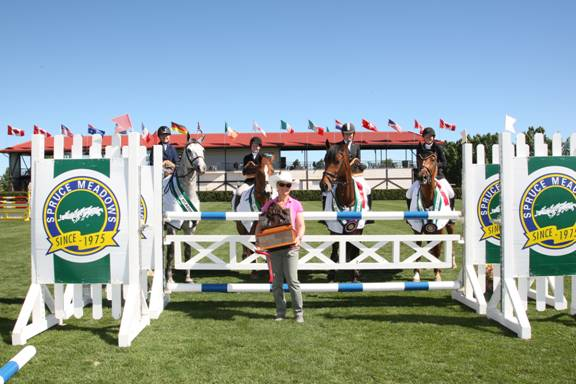 Team NorCal, led by Chef d’Equipe Meredith Herman, finished in third place after their jump-off rider, Simonne Berg (USA), rode Limerick to four faults in 47.34 seconds. They had zero faults in the first two rounds of the competition. Joining them on the team were Sarah Pulchalski (USA) on Lucia de Luxe (0, 0), Eve Jobs (USA) with RL Cheenook (4, 0), and Lynne Lancaster (USA) with Sky Dancer LS (0, 0).

The $2,500 Friends of the Meadows Prix des Nations 1.00m saw the H.A.P.P.E.E. Team with Chef d’Equipe Jan Pearce ride to victory. The team consisted of: Gwendolyn Sontheim Meyer (USA) on Coral Reef IEM Capolavoro, who had one time fault and then four faults; Katrina Garnett (USA) and Shakyra, who had four and 10 faults; Josef Polk (USA) and Saint Sebastian, who had four and a clear round; and Linda Lauper Polk (USA) and Top Shelf, who were clear and had five faults. They team finished on 14 faults. 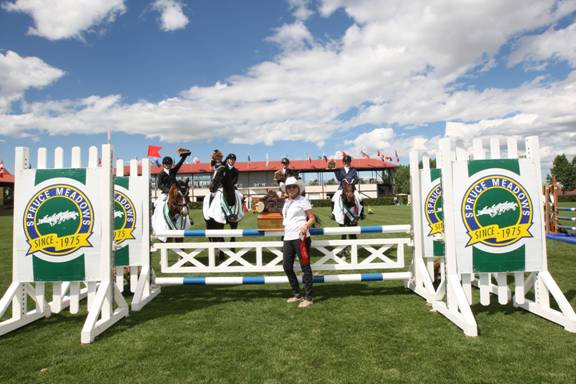 Second place went to Border Patrol and Chef d’Equipe Mary Manfredi who finished on 19 faults. The team was led by Nicola Brandon (USA) and Outlander (0, 4 faults), as well as Kelsey Brooks (USA) and Callula (1, 8), Chad Leat (USA) on Dutch Girl (5, 1), and Taylor Phillips (CAN) with Ziggy, who were unfortunately eliminated in both rounds. 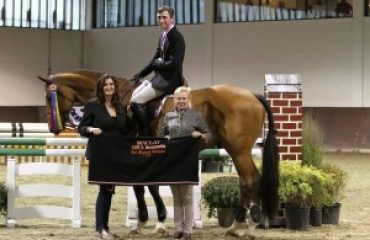 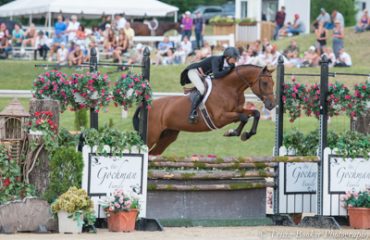