Lexington, KY – October 30, 2013 – When $50,000 is up for grabs it brings out the best horses and riders in the world, putting their best foot forward. That is how the Open Jumper division at the 2013 Alltech National Horse Show kicked off today. Todd Minikus and Quality Girl left nothing to chance as they sped around Conrad Homfeld’s challenging track, besting the field by two seconds to win the Taylor Harris $50,000 Open Jumper Welcome Speed, presented by Sasco Creek. The second place award went to 17-year-old phenom Lillie Keenan, giving the professionals a run for their money.

Olympian McLain Ward set the target to beat as the third rider on course. He and Zander, owned by Ward and Grant Road Partners of Brewster, NY, zipped around the turns and left all the rails intact, posting a time of 60.23 seconds, which held up for fifth place.

Ireland’s Shane Sweetnam bested Ward’s time by 1/10th of a second six rounds later aboard Cyklon 1083, owned by Spy Coast Farm of East Setauket, NY. Leaving strides out and shaving off edges of the turn, it looked like it could be the winning round early in the class. Keenan attempted to beat it with her first mount Pumped Up Kicks, owned by Chansonette Farm of New York, NY, but fell just shy of the leaders with a time of 60.92 seconds, which eventually claimed sixth place.

When Todd Minikus entered the Alltech Arena with Chris Brems’ Quality Girl mid-way through the event, the whole class changed. He and the winning mare put on the gas and never held off, slicing fences and taking all the inside options, while utilizing her huge stride to quickly navigate the track. The duo blazed across the finish line in 57.70 seconds, leaving Sweetnam and Ward in the dust and claiming a commanding lead. 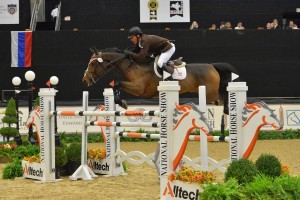 “You really just get her on the right gear and let her go,” explained Minikus. “She is a bit of a typical woman, I hate to sound chauvinistic but it’s true. She’s a little sensitive and doesn’t like you fussing with her too much. She is true to her name. She has a lot of quality, and you need to let her just use her quality and stay out of her way.”

Francois Mathy of Belgium made a solid effort with Team Harmony’s Plinska Des Isles, but it was not good enough. Although they never touched a fence, Mathy and Plinska Des Isles broke the beam at 59.96 seconds, which would only be good enough for third.

Mathy’s time was beat by a rider still making her way into the professional ranks. Lillie Keenan won the 2013 North American Junior and Young Rider Championships Individual and Team Show Jumping Gold Medal, as well as the USEF Junior Jumper Individual Championship with Londinium, and tonight she showed that they are more than ready for the Open Jumper divisions.

Despite a member of the jump crew standing in the way of one of the oxers as she galloped over the track, Keenan showcased skill and style far beyond her years, navigating the course in a speedy 59.44 second to capture the second place ribbon behind Minikus. 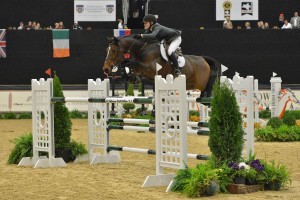 Keenan explained, “When I was going to the vertical people were screaming and I was like ‘Why are people screaming at me? Am I doing something wrong?’ There was a guy standing in the middle of the next oxer with a rake. I tried to yell heads up, but I had so much adrenaline going that I just started screaming, but it was effective because he moved.”

Minikus and Quality Girl placed second in the Pfizer Million Grand Prix at HITS-on-the-Hudson, and have been consistent throughout the summer, but the mare is still new to competing indoors.

“She has had a kind of rough start at the first couple of Indoors, Harrisburg and Washington. She is just green indoors,” stated Minikus. “Tonight she jumped like a veteran. I think we are back on track.”

Minikus added, “Quality Girl gave me the edge. The mare is a winner. Normally with as much money coming up in the rest of the week as far as tomorrow and Saturday night’s grand prix, you normally wouldn’t want to be on the gas pedal that far. It was $50,000 tonight though, and with the SSG riding glove bonus money involved, it was worth trying.”

The highly popular SSG Riding Gloves ‘Go Clean for the Green’ promotion kicked off this evening with a $3,000 bonus for Minikus, who was wearing the leading riding gloves during his winning round. 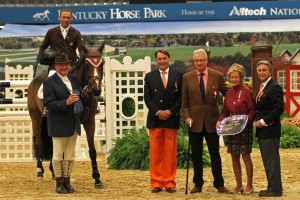 Keenan was equally thrilled with her performance, making the decision to compete in the Open Jumper divisions after winning the Junior Jumper events in 2011. “The first horse I rode was Pumped Up Kicks, and I got to watch a few go,” she commented. “I’ve done lots of speed classes, but I obviously have way less experience than the people in this, so I benefitted from watching them. The course wasn’t bigger than anything I’ve jumped, but as I am starting to do these open classes it’s more difficult. The courses are more technical, and it’s meant for a more advanced ride than the junior jumpers. I am trying to move up, and I think I have the perfect two horses to do that.”

“I was a little nervous,” admitted Keenan. “It’s the National Horse Show, there are a lot of people watching, and I didn’t want to make a fool of myself. It was hard, but it was a lot of fun, I am trying to learn, and I want to move up to the highest level of the sport. I learn so much by doing these classes, not just because they are harder, but also because I am watching the best riders in the world do the course. Then I am trying to imitate them. That’s how I am trying to move in the right direction.”

Keenan concluded, “The biggest thing for me today was to have the confidence to go in and do that. Now I have a lot more confidence going into some of the other shows knowing that I can be competitive and do the courses, I just have to remind myself that I can.”

The 2013 Alltech National Horse Show, 130th edition, will continue tomorrow with the Double H Farm $100,000 Open Jumper class in the evening. Earlier in the day, the junior and amateur riders will have the opportunity to showcase their skills during the Deeridge Farm $10,000 Junior Jumper class and the Chansonette Farm $10,000 Amateur-Owner Jumper class. The highlight event will be Saturday night’s Alltech $250,000 World Cup Qualifying Grand Prix presented by Lifeforce. 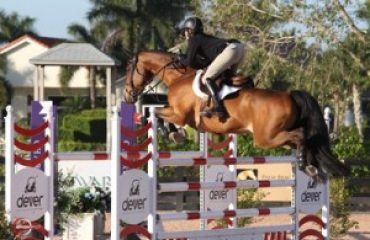