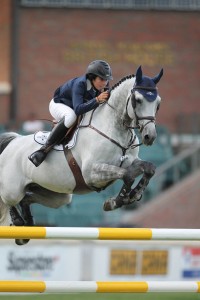 A total of 44 horses entered to win Saturday’s coveted $200,000 ATCO Power Queen Elizabeth II Cup in the International Ring.  Only seven clear rounds were produced over the challenging first-round track set by course designer Michel Vaillancourt of Canada.  In the second round of competition, five horse-rider combinations, including Tisbo and King Kolibri, repeated their fault-free performance to force a jump-off.

Having had the fastest time in the first round, Tisbo had the advantage of going last in the jump-off.  Kent Farrington, Rich Fellers, Leslie Howard and Beezie Madden, all major championship veterans for the United States, tackled the jump-off track before her.  As the final rider in the International Ring, the 28-year-old amateur competitor gave it her best shot, jumping clear all the way until the final fence.  With four faults in a time of 38.87 seconds, Tisbo placed fourth overall while the win went to two-time Olympic team gold medalist Beezie Madden riding Simon, who was clear in a time of 37.58 seconds.

“If you get that far, you have to go for it!” smiled Tisbo of her performance with King Kolibri, a 10-year-old grey Hannoverian stallion.  “I didn’t walk into the competition expecting to get as far as I did.  It is an honor to make it to the jump-off in one of the most prestigious grand prix events in North America, so you can’t be conservative at that point.  My horse jumped great, and I couldn’t have been more pleased with his performance.  I was thrilled!”

“I was really happy with her performance, it was our best score to date in a derby,” said Tisbo of the 12-year-old selle francais mare owned by Tequestrian Farms.  “After having a day like I did on Saturday, sometimes it is hard to keep focused and stay in the game.  I was able to put the excitement of Saturday behind me, focus on the next challenge, and succeed.”

Tisbo now returns to her summer base in Sherman, CT.  She plans to compete at the Jumper Classic from August 8 to 12 in Hampton Falls, NH, and the Hampton Classic from August 26 to September 2 in Bridgehampton, NY, before returning to Calgary for the Spruce Meadows “Masters” tournament held September 5 to 9.

“Spruce Meadows is my favorite show,” said Tisbo.  “From the jump crew all the way up to Linda and Tom Heathcott and Marg and Ron Southern, I can’t compliment them enough.  I am honored to be a part of it.” 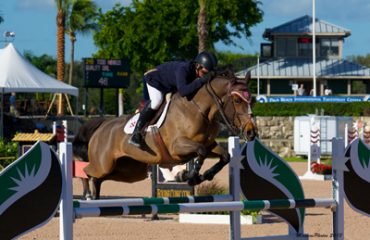 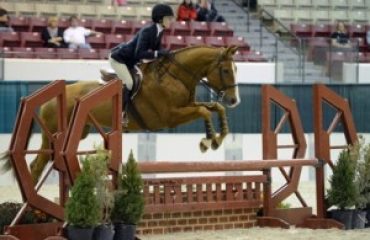