OTTAWA, ON Oct. 2 2013 — Fresh off the heels of victory in the Saugerties series, Toronto native Ashley Holzer took top spot in three of four classes on two different mounts at the renowned Dressage at Devon CDI-W/J/Y event held this past weekend in Devon, Pennsylvania.

Holzer, currently residing in New York, opened Devon in a big way capturing first place with 72% in the FEI Grand Prix for Special, coming in well ahead of her competition on Jewel’s Adelante, Elaine Cordia-Van Reesema’s 13-year-old Swedish Warmblood gelding sired by Don Schufro. The pair has developed a strong partnership in their short time together with a string of first place finishes in their last few competitions. 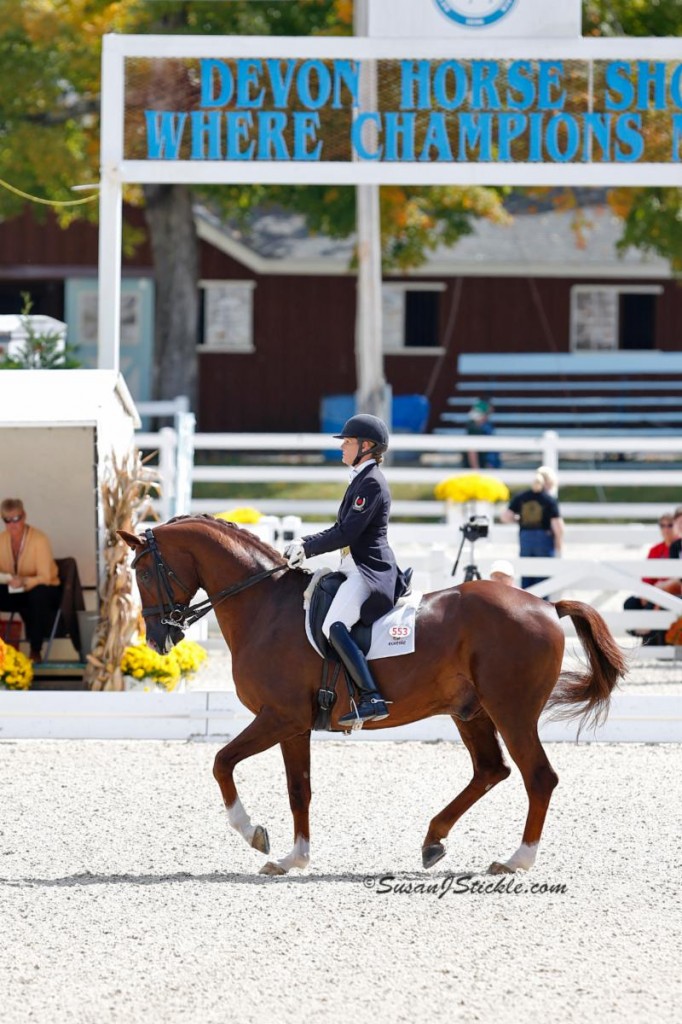 Taking fourth place in the Grand Prix for Special was David Marcus of Campbellville, ON and Don Kontes, Deborah Kinzinger Miculinic’s 13-year-old Swedish Warmblood gelding sired by Don Schufro, on a final score of 66.511% followed closely by Tom Dvorak of Hillsburgh, ON and Viva`s Salieri W, Augustin Walch`s 12-year-old Hanoverian stallion sired by Viva Voltaire, with 66.298% for fifth. Megan Lane of Loretto, ON rode to sixth on 66.021% on Caravella, her 12-year-old Canadian Dutch Warmblood mare sired by Contango.

Later that same day, Holzer had her second triumph dancing under the lights with Breaking Dawn, P.J. Rizvi’s 12-year-old Dutch Warmblood gelding sired by Akribori, in the Grand Prix for Freestyle earning a score of 72.830%.

“I was extremely pleased with both Jewel’s Adelante and Breaking Dawn. They both delivered outstanding performances to win their tests. Jewel’s just finished an exceptional event at the NEDA show in Saugerties last week so coming here so quickly after it and producing at that level again is a testament to his capabilities,” commented Holzer. He’s really a joy to ride down the center line.”

When asked what it takes to successfully show in back to back competitions, Holzer commented, “It takes a great deal planning to handle tight show schedules without hitting fatigue levels that impact your tests. You need to plan properly to ensure that you continue enjoy the competitions. Knowing your horse, making sure you are prepared for each class, knowing the schedule well enough that you anticipate additional time to prep onsite if you need to, shipping early to know the rings in advance especially if your horse is running tense or nervous, and having downtime in-between, if that’s what your horse needs. We went home between Saugerties and Devon so Pop Art could get his pasture time; he loves it, it’s important to him mentally. Understanding what your horse needs physically and mentally is extremely important and that takes time and experience both in the ring as well as on the road.” 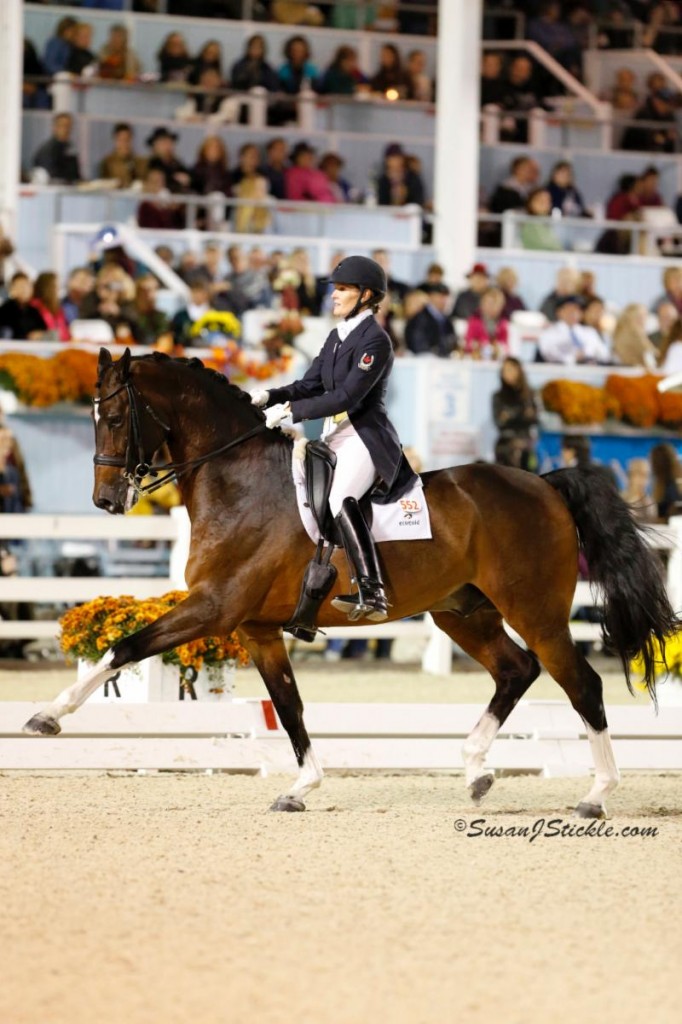 Holzer and Breaking Dawn went on to take second place in Saturday’s FEI Grand Prix Freestyle on a final score of 76.525%. Irving placed sixth with Pop Art earning 72.300% in only their sixth start together, a placing that Holzer described as ‘heart wrenching’ for the thrill as a trainer that may have been greater than her own success. Brooks and D-Niro earned 69.475% for their efforts coming in ninth. Meisner and Tango secured tenth on 69.425%. Marcus and Chrevi’s Capital’s score of 67.975% placed them 11th.

In Sunday’s finale, Holzer teamed up again with Jewel’s Adelante for the Grand Prix Special where the duo earned another first place finish, this time with a final score of 73.708%. Lane and Caravella took fourth place with 68.458%. Diane Creech of Caistor Centre, ON and Devon L, Doug Leatherdale’s 13-year-old Hanoverian gelding sired by De Niro, rode to a sixth place finish earning a score of 66.438%.

“It was incredible here at Devon. I was very pleased with both my horses’ performances this weekend,” said Holzer. “I’m so happy for Brittany, Jill, Lindsay and Jacqueline too. We’re a team, and it’s a wonderful positive experience working and showing with them. You don’t win these classes by yourself; it takes a huge support team, and especially owners who give you the room to work with their horses to get the best out of them at every performance. They support their riders and horses in so many ways; we couldn’t do it without them. I’m so thankful for the awesome team we have, they make each show an encouraging and fun atmosphere and I always show best when I’m having fun.”

Brittany Fraser of New Glasgow, NS and All In, her eight-year-old Dutch Warmblood gelding sired by Tango, continued their recent successes by taking second place in both the FEI Prix St Georges with 71.754% and the Intermediaire 1 on 71.228%.

Maya Markowski of St. Clements, ON rode Lumiere, her 10-year-old Canadian Warmblood sired by Lynx, to ninth place on 67.018% in Friday’s Prix St Georges and made her mark Sunday in the Intermediaire 1 Freestyle test coming in third place with their final score of 70.525%.

Young Rider, Tanya Strasser – Shostak of Ste. Adele, QC rode her 2013 NAJYRC partner Action Tyme, Evi Strasser’s 13-year-old Oldenburg gelding sire by Aktuell, to finish in the top two across all her tests this weekend earning 66.974% in Friday’s Team test for second place, 67.605% in Saturday’s Individual class for first place and ended the three day competition with another first place finish in the freestyle test on a score of 70.650%. 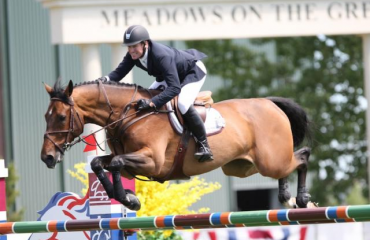 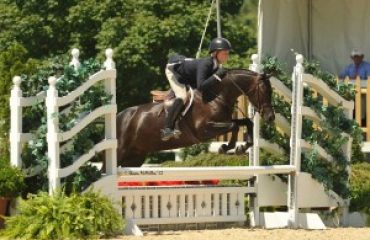 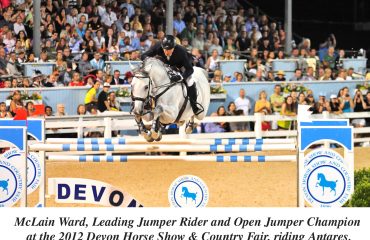