(SPRUCE MEADOWS, Calgary, AB): The ‘North American’ Tournament finished today with two fantastic competitions in the International Ring. The highlight of the day was the $140,000 Cenovus Energy Classic Derby 1.60m, and Olympian Jonathan Asselin recorded a victory for Canada as the winner with Showgirl. In the $50,000 Akita Drilling Cup 1.50m, McLain Ward (USA) rode to victory with Cadence.

The Spruce Meadows Summer Tournaments continue next week with the ‘Pan American’ CSI 5* on July 11-14 and features the $400,000 Pan American Cup presented by Rolex on Sunday, July 14.

Watch highlights from Sunday’s competition at the ‘North American’!

The 23 entries in the derby had a tough task ahead of them today. While the course was designed by Pamela Carruthers (GBR) in 1990 and is the same every year, it is a challenging, long track that asks a lot of horses and riders. They must do their best over 16 numbered obstacles that includes two triple combinations – the derby bank and the grob – as well as three double combinations – a liverpool oxer to vertical, the table bank, and the vertical to oxer double liverpools.

Clear rounds are a rarity in this event. In the 565 attempts on course from 1990-2012, there have only been 17 clear rounds and Asselin was so close to recording one. He finished with just one time fault in 148.31 seconds, just .31 of a second over the time allowed. But it would be enough at the end of the competition to take home the win.

Watch an interview with Jonathan Asselin!

“I wanted to jump clean today,” Asselin acknowledged. “I ended up slowing down quite a bit going up the bank. I saw a deep one at the top and then I was very slow down the bank. I think at the beginning of the course I was fast enough to make the time and after the devil’s dyke I got a little careful. I really wanted to jump the rest clean and I slowed down a little bit at 14 and 15, the hedge and the double.”

Second place went to McLain Ward (USA) and Wannahave, who were on track to have a clear round until the final jump, when Wannahave slipped on take-off and went through the fence. They finished on four faults and stopped the clock in 144.13 seconds.

Ward explained that Wannahave lost his right front shoe after fence 14 and he saw it go flying by his head. “I know what happens when you lose a shoe on turf. It’s difficult,” he said. “I got a bit slow to the liverpool double so he was able to keep his feet, but I think when he had to set at the last (jump), he just lost that right foot and kind of slid into it and lost the ability to really push off. Maybe if I had kept going in seven (strides), he would have been a little lighter off the floor, but that’s a woulda, coulda, shoulda.”

With just a rail at the third element of the grob, Darragh Kerins (IRL) and E Muze Yek would pick up third place when they stopped the clock in 147.42 seconds.

Kerins said that the decision to enter the derby was last minute and this was E Muze Yek’s first derby. “I didn’t know what to expect today, but it looked like a fun class the first week and I really wanted to do it myself, so I just took one jump at a time and he handled it great,” he said. “He just got a bit green there in the devil’s dyke, but we’ll come back next year and try again and he will be more confident the next time.”

Kerins added, “This is the first time he’s ever been down a bank. We didn’t even school it before we came here or anything like that. The first week the devil’s dyke was an option in a 1.50m class and he jumped it fine that day so that is the reason why I went today.”

Wannahave competed in his first derby during the ‘National’ and since has been a winner in the 1.45m derbies in the All Canada Ring. “I think it has helped him,” Ward said of the 1.45m derby classes. “I am thrilled. He came here the first week never having jumped a derby and jumped the course well, but struggled with the naturals. Today he jumped the naturals like nothing.”

Ward also pointed out, “It was nice to see 23 in today. It really has to be said that Spruce Meadows has encouraged not only those smaller derbies, but also helping us practice the naturals a little bit because some of us don’t have those (at home).”

Jonathan Asselin gives the thumbs up after his ride in the derby. Photo © Spruce Meadows Media Services.

Asselin was “really excited” with his horse and his ride today. “I didn’t think I would win it and I really got a little lucky to win it, to tell you the truth. McLain was in time, very fast, and really got unlucky. But I’ll take it and what a treat!” he said with a smile.

Asselin felt that the derby would be a good fit for Attache Stables’ Showgirl, a 13-year-old Selle Francais mare by Gold de Becourt x Elf III, after a strong performance in her first derby last year. “This year I thought I better get ready and practice the devil’s dyke a little more. She has always been good with the natural stuff, but the devil’s dyke does take a little practice and she was as bold as could be and jumped it beautifully today,” he related.

Showgirl has “a lot of blood,” Asselin described. “She is very bold and she has a little character. She is French blood and a woman, so she is a little opinionated sometimes, but she is a really talented mare. We have had her for two years now and I have had a lot of fun with her. I think we still have some work to do, but the relationship is getting better and that’s a nice thing. At our age you don’t really expect that. She is 13 and I’m getting on and she is just trying her heart out more and more all the time.”

Winning in his hometown and for Canada meant a lot to Asselin. He expressed, “It sure is a real treat to win here at home with the crowd behind you. It is a big win for me and one I won’t forget.”

Despite having first ridden Cadence last week, McLain Ward had confidence in his new mount. They have had a string of top finishes at the ‘Canada One’ and ‘North American’ Tournaments, and today was their first victory.

Ward explained of his jump-off plan, “I was trying to be efficient everywhere without knocking a jump down. I knew if I knocked a fence down I was giving them a much better opportunity. They’re both young and hungry kids. They’re not just going to give it away. Wilton I know particularly well was going to try. It’s his nature. I thought if I put enough pressure, I could make them make a little mistake. I thought if I could be neat and slick, it certainly would be difficult.”

Jos Verlooy (BEL) and Domino came in next and were also clear, but their slower time of 38.72 seconds left them in second place. Wilton Porter (USA) and Radio City were the final combination, and while they made a great effort in 38.04 seconds, a rail at the final jump gave them third place.

Ward was pleased with Cadence, a horse that he had seen compete before. Cadence is a 12-year-old Swedish Warmblood gelding by Cardento x Irco Marco owned by Procedures Inc. “I had seen him quite a bit,” he agreed. “I’m thrilled to ride him and thankful to Megan (Wexler) for giving me the opportunity to ride him. He’s been doing the big grand prix with her for a number of years now and I had seen him jump the first round of the World Cup Finals with Michelle Spadone. I knew the horse well. He was a little under the radar. I was nicely surprised when she asked me to take him and show him while she was pregnant. It’s worked out to be a really good thing.”

Ward said that Cadence has been “trying really hard,” and has fit in well. “He’s a wonderful horse and he’s a real gentleman. He’s so rideable that the time allowed is not a huge factor with him. He’s always trying to help you,” he described. “He’s a great competitor and knows his job. I had hoped, and he’s even better than what I had hoped for.”

Ward broke the $1 million mark in earnings at Spruce Meadows this week and noted that his win with Sapphire in the $1 Million CN International Grand Prix “helps a lot,” and that he hopes to keep attending Spruce Meadows for many years and increasing that number.

He added, “It’s great to see the prize money in our sport growing the way it is. It’s affording the opportunity for those of us who would really like to be professional riders to be able to do that in the way we would like to, and not have to cover as many job titles.”

Beezie Madden was rewarded for her consistency in the 1.60m division and won her first CN North American Championship this week with Simon when she finished on 362 points. She was awarded a $15,000 bonus as well as one year’s supply of gasoline up to $5,000 compliments of ESSO Imperial Oil. Reed Kessler and Cylana were second with 296 points for a $7,500 bonus, and Eric Lamaze was third with 272 points on Powerplay and picked up a $2,500 bonus. 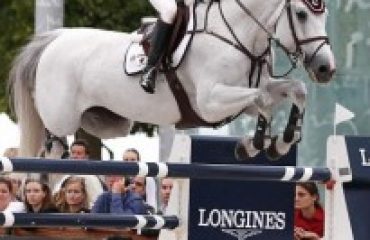 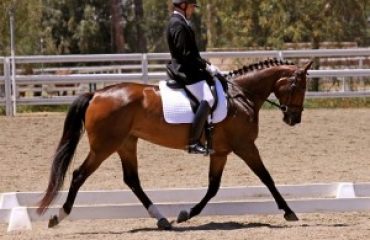