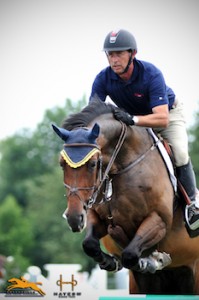 Fresh off his return from the 2012 London Olympics, where he was the traveling alternate for the Canadian Olympic Team for Show Jumping, Candele was one of only three riders to post a clear round over the track set by two-time Olympic course designer Leopoldo Palacios of Venezuela, who also arrived direct from London. Candele advanced to the jump-off with two mounts, Game Ready and Carlotta Singular la Magnifica, both owned by Susan Grange.

First to return to the ring was 2008 Olympic team silver medalist Mac Cone of King, ON, riding Amor Van de Rostal, a 12-year-old bay Belgium Warmblood gelding owned by Chadburn Holdings Inc. The pair laid down a clear round, stopping the clock in 46.08 seconds and putting the pressure on those still to come.

“He was fantastic,” said Candele. “He’s a very fast horse and I knew I would have to use that speed if I was going to catch Mac.”

Catch him they did, turning in a clear performance in a time of 44.76 seconds to take over the lead. 22-year-old Jordan MacPherson of Toronto, ON, tried to catch the veterans aboard her 13-year-old Belgian Warmblood mare Piccobello du val de Geer, but a rail down meant they would finish with a total of four faults.

Already guaranteed the win, Candele piloted Carlotta Singular la Magnifica, the 10-year-old bay Hannoverian mare that accompanied him to London, to his second double-clear performance of the day.

“I was very pleased with her performance, especially since she’s fresh off the flight back from London,” explained Candele. “I knew when I went in the ring that I had already won the class, so I didn’t need to push her too hard.”

He continued, “I think our performance in the grand prix really solidified the fact we deserved our spot as the Olympic alternate.”

The pair’s time of 45.53 seconds was fast enough to secure second place. Candele plans to compete with both Carlotta Singular la Magnifica and Game Ready in Sunday’s $50,000 Grand Prix presented by NationWide Auto Warranty. The grand finale, set to start at 2 p.m., will be televised by Rogers Television. In addition to presenting the $50,000 Grand Prix, title sponsor NationWide Auto Warranty is offering two 2012 Kia Soul vehicles, valued at approximately $22,000 each, to the winners in both the Junior/Amateur and Open Jumper divisions. Both cars will be awarded on Sunday.

“Leonidas is a very funny character,” said Hayes of Orangeville, ON. “If the ground isn’t perfect, he doesn’t jump his best. When the ground is great, so is he. This is the best footing I’ve ever jumped on, and ‘Leo’ seems to agree. He answered all of the difficult questions asked of him by one of the best course designers in the world. It was a very fast jump-off, which was well suited to him because he’s a very fast horse.”

He continued, “This is the third year in a row that ‘Leo’ has won this class. In 2010 and 2011 he won it with Sarah Johnstone when we held the tournament in Ottawa. He also won it in 2007 with me when we were in Collingwood.” 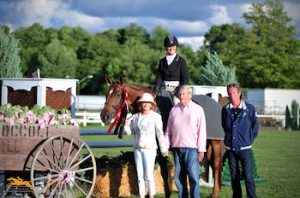 Darcy Hayes and In Your Dreams 3E won the $10,000 Broccoli Hill Hunter Derby and the $5,000 Hayes Co. Hunter Derby Welcome, pictured here with Paddy Ann and Latham of Broccoli Hill and David Marion of Antares.
(Photo by Victoria Clermont)

Hunters are also in the spotlight during the Orangeville Show Jumping Tournaments, with two hunter derbies taking place in the grass grand prix field. Both derbies were comprised of two rounds of competition, and included many creative natural obstacles.

Darcy Hayes of Aurora, ON, swept both Derby events riding In Your Dreams 3E, an eight-year-old chestnut Canadian Sport Horse mare owned and bred by KingRidge Stables. On Thursday, August 16, the pair took home top honours in the $5,000 Hayes Co. Hunter Derby Welcome, outperforming 21 other competitors to secure the red ribbon. It was a repeat performance on Saturday, August 18, when they won the $10,000 Broccoli Hill Hunter Derby.

“It was a nice, big galloping course with some tight turns,” explained Darcy of Saturday’s competition. “The field was quite fun to ride in. It was a bit of a rolling field, so very similar to riding in the open hunt courses years ago. It would have been a thrill to have competed in the jumpers in there as well.”

She continued, “In Your Dreams has just been amazing this week. We were champions in the Combined Hunter division as well. This was actually her fourth hunter derby win in a row. I couldn’t be more pleased with her performance.”

Show organizers Hayes Co., who previously managed show jumping tournaments in Sutton, Collingwood and Ottawa, are celebrating their 28th year by mounting the Orangeville Show Jumping Tournaments in their hometown of Orangeville. Two-time Canadian Olympian Jay Hayes, his wife Shawn, and their three daughters, Lauren, Ainsley and Regan, as well as son-in-law Johan Letimonier, all call the area home. 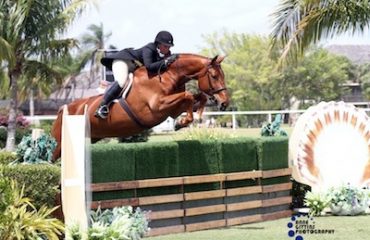 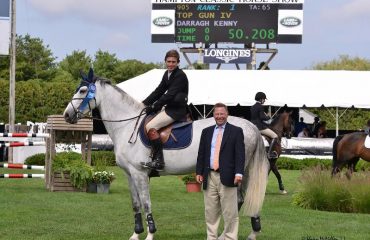