Michael and Andre with the “Andre” jump at home in Katonah, New York.
Photo by Allie Coffin

Andre’s big Eq success began at the very start of his professional career when he coached his first equitation champion: Peter Lutz won the 1987 Rolex USET Show Jumping Talent Search — East and the Rolex ASPCA Maclay Final. The talented trainer’s roster of equitation champions and reserve titlists is impressive to say the least.

Andre admitted that his background influenced who he is – as a person, trainer and mentor: “If I see someone like myself, I am compelled to reach out. Judy Richter and countless others lent me a hand and I never forget that. I’m eager to help others if they’re hardworking, if they’re good people, if they’re eager, talent notwithstanding. I’m happy to help and I think I’ve made a lot of difference to future good people as well as to good riders. It’s very fulfilling to help these kids and winning is a trainer’s dream.”

Success has not spoiled Andre. His candor in expressing his appreciation and gratitude to everyone, no matter how small a role they played in his evolution as a rider and trainer, is refreshing.

“I’m thankful everyday – I owe all my success to people like Judy and my brother Michael Dignelli – without them, my story would have been different,” stated Andre. “What people did for me changed my life, so I try to give back. Kent Farrington and Patricia Griffith, my assistant trainer – I’ve been a big part of their lives. I’m happy to help anybody. If you show up at Heritage Farm, you have my full attention.”

Awards Photos! Thanks to his talent as a trainer, Andre (right) has appeared in countless award presentation photos like this one of Allie Toffolon winning the 2012 Sam Edelman Equitation Championship.
Photo by Michael Dignelli

Andre and Michael, co-owners, have made a resounding success of Heritage Farm in Katonah, New York. Andre credits their parents with providing the best advice: “They told me: find something you’re passionate about and stick to it, even through the highs and lows. It wasn’t a horsey family, but once my parents understood that this was the direction I was going, they weren’t as concerned for my future.”

Even as a junior working student with Judy Richter at Coker Farm in Bedford, New York, Andre’s future looked good. After winning the USET Finals, he discovered that riding and teaching at Coker, plus college, didn’t work for him: he wanted to work full-time with horses. “Andre is the exception that proves the rule. He is a genius – passionate from day one and a beautiful rider,” stated Judy.

When Andre was 25, he struck out on his own. In 1997 the Dignelli brothers bought the old Primrose Farm where Andre rode early in his junior career and expanded it from 54 stalls to 100. The 40-acre facility includes two sand rings, a five-acre Grand Prix ring and an indoor arena.

Over the last 20 years, Andre has witnessed changes in the show world, especially in the horses. The trend has shifted from Thoroughbreds to Warmbloods in the show ring. Hunter derbies, popular with exhibitors and spectators, have added new life to the hunter shows.

Heritage Teamwork: Lillie Keenan on Clearway and Jacob Pope on Uno walking together at the Maclay Finals.
Photo by Michael Dignelli

“We’ve gone from Thoroughbreds to Warmbloods,” he said. “The horses I like to see in equitation are real athletes. They jump well, could almost be a hunter, and move with enormous stride and scope. They’re even on leads, have good temperaments – they’re our unsung heroes. A really good equitation horse could do a lot of other jobs. Most of my Eq horses have excelled in the hunter derbies, too. One of my students, Lillie Keenan, won the derby finals in 2011. At the time she was 14.”

The year-round circuit happens to be a hot topic with many professionals, including Andre, who takes as many as 75-100 horses to a show. “I’d love to see us have better quality events,” he admitted. “We’ve lost the higher end levels of showing. We bring every level of rider to AA shows. I wish we had more shows like the Hampton classic. I’d like to see us show less. I like breaks between shows so I can go home and teach. Florida – we used to go down for the weather, now it’s months of shows.”

With success after success, with the pressure on for both students and trainer, in all the photos Andre appears cool, calm and collected. You can’t help but wonder if he ever suffers from nerves. “I’m incredibly calm, pretty good in a crisis,” he said. “I have a very even temperament, which has served me well with my teaching. I’m a Virgo, very organized. I don’t go anywhere without my toothbrush.” [He laughed, but he meant it.]

Andre with Allie Toffolon, Jacob Pope and Victoria Press walking the course for the Sam Edelman Equitation Challenge at the 2012 Hampton Classic.
Photo by Michael Dignelli

Last year Andre and the Heritage Farm team earned accolades as the Chronicle of the Horse Show Hunter Horseman of the Year. Lillie Keenan piloted Madison to earn the USEF Horse of the Year (large junior hunter, 15 & under). Heritage Farm keeps racking up the honors: the question is what’s left to accomplish.

“I had a huge bucket list when I reached my mid-30s – owning my own farm, winning all sorts of accolades, but now my biggest goal is to make sure I’m truly happy in my professional life and personal relationships,” said Andre. “All of the things I thought were truly important in my mid-30s, I realized I had done most of them. It gave me great joy to be able to look after my parents after they had looked after me. A year and a half ago, I lost my mom. My goal has always been to live my best life and that continues to serve me well.

“I live in New York City and Westchester County, and I have a very full life away from work – I like to work out, shop, go to the theatre, travel,” he added. “We take trips and get away, no shows on a holiday. I like to refresh and go back to work. It keeps me inspired and I still love my job.”

Andre and Patricia Griffith discuss the course with Jacob Pope and Lillie Keenan at the 2012 USEF Medal Finals.
Photo by Michael Dignelli 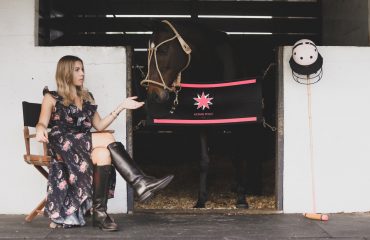 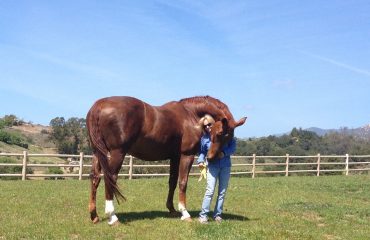 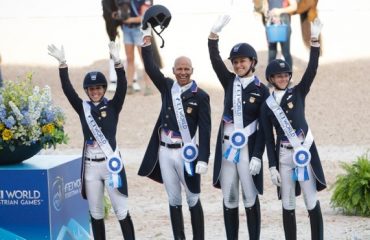