How do other sports influence your mindset as an athlete?

I’ve got to admit I’m a huge fan of many sports and in today’s age of technology, with YouTube and an abundance of podcasts, it’s very easy to become an intimate fan of a lot of top sporting stars. Growing up in Australia, sport was a huge part of everyone’s life and on top of that I grew up in a very sporting family, with both of my parents being winter Olympians.

From a very young age, we were encouraged to take on all sports and I’m very proud to say that my older sister is an ultra-marathoner; my mom was an Olympic speed skater; and my dad was an Olympic cross-country skier, so you could say the Martin family is a true sporting household.

The great thing about technology is how close you can get to getting into the mind of your favorite sports heroes. I’m obsessed with podcasts; there’s nothing I enjoy more than Joe Rogan interviewing top athletes on his podcast. I find it very interesting listening to a two-hour conversation with some of the people I look up to and learning  athletes in other sports struggle with the same things we do in eventing, with injuries and highs and lows, the common challenges of chasing the dream. It’s good to know we’re not the only ones in the world struggling as we try to achieve what we dream of.

One of the great things about podcasts is when it’s a lengthy conversation: When it’s just a three-minute interview, you don’t get much of a feel for what’s going on or who is being interviewed. When they talk for an hour or two, they really get in-depth into the tiny details, be it training or mindset, and that’s the best education, to get a feel for what it takes to be successful in a multitude of sports.

Recently I was lucky enough to be a guest on the Major League Eventing podcast and I feel like they do an excellent job. Their relaxed way of presenting the interviews is a really good format and Rob and Karen Bowersox are bringing listeners a true inside look at the personalities of some of the top riders. I listen to most of these podcasts while I’m driving long distances to events and shows, and I’m a little bit of an insomniac so sometimes I’ll listen to them as I’m trying to fall asleep at night.

How do you plan for an Olympic year?

It’s still a long time until the Olympic Games but a lot of riders are slowly lining up their horses for next year. It’s going to be very hard to make the Olympic team due to the new FEI Olympic format for eventing: In order to keep eventing in the Olympics by allowing more nations to participate, teams will now only consist of three horse and rider combinations. I remember going to Sydney as a spectator and it was a team of seven; at London when I made my first Olympic team, we had five; at Rio there were four; and now it’s harder than ever with only three.

I think being about a year away from the Olympics, I’ve started to look at my top horses in the barn and figure out which ones have a chance at making the team. It’s important to come out with the best schedule of events to potentially get selected. I find the year before the Olympics, the horses need to have a good strong run. For me this is usually at Fair Hill International in October, and then you need have a good run at the spring events, knock the ball out of the park at Kentucky, and keep them fit, sound and strong to have a good chance at the team.

It may sound simple but it’s very hard to have everything go to plan. I think it’s important not to go too hard on the horses and bust them at the lead-up events next year during the winter and spring. Any championship year takes a lot out of the horses, and riders tend to get Olympic fever and go too hard on them a little bit too early. It’s important to remember that these lead-up events are really just to have the horses primed for a top performance at Kentucky or Badminton.

One of my hopeful horses is Long Island T. I’m sidelined with an injury at the moment so my good friend Phillip Dutton will give him a run around the Ocala three-day event in Florida for me. Usually I wouldn’t bother; I’d just rest him, but since it’s the year before a championship it’ll build him up to have a good run. I’ll ask Phillip not to give him too hard a run, since our eye is on 2020.

I can’t begin to tell everyone how much I appreciate my friendship with Phillip. Over the years, we’ve helped each other again and again; in 2014 Phillip rode Trading Aces and Shamwari when I was injured, and just in time I got back on Shamwari to make the team, and since Phillip was short a horse, he rode Trading Aces at the World Equestrian Games in Normandy. We have a great friendship and I’m very lucky I’m best friends with one of the best riders in the world. Phillip is without question one of the most unselfish people I’ve ever met, and he’s a true champion. 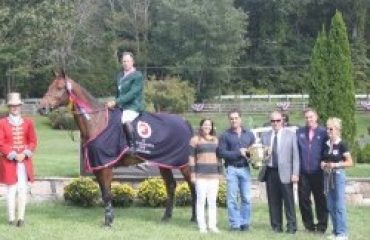 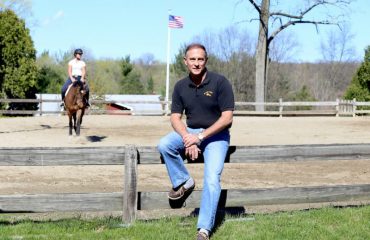 Armand Leone: From Nations Cup Teams to the Courtroom