For most equestrians, feverish determination runs in our blood. It’s what drives us to wake up in the wee hours of the morning to muck out stalls, spend hours in the saddle and stop back at the barn at night just to check on our horses. For singer-song writer and equestrian Kate Grom, it’s also what made her breakthrough album possible.

Equipped with a can-do attitude and inspired by influential women like Nora Ephron, who famously said, “Be the heroine of your life, not the victim,” Kate employed that dedication to produce the crowning achievement of her career — her debut album, aptly entitled “Heroine.”

Passion for Music
The Americana album, which features nine profoundly emotional and yet soothing tracks, has in many ways been a lifelong pursuit for the up-and-coming artist. Fascinated by music and the arts of composing and singing since she can remember, Kate was in many ways destined to one day emulate her childhood idol, Fleetwood Mac singer Stevie Nicks. Like horses, which were also a lifelong passion, music was something that always brought her happiness — something she had to do.

It wasn’t until two years ago, though, that the virtuoso’s dreams of writing and singing professionally would come to fruition.

Kate, with a new filly, grew up on her family’s horse farm.

A young woman then in her mid-20s, Kate had spent years working in the music industry, taking job after job and longing for her time in the sun. That is, until she couldn’t wait any longer. Jaded by her efforts and the exhausting balance between the practical and the potential, she decided to pick up the reins of her life, take a chance and devote time to her passion for music.

“I knew it was now or never,” Kate explained. “I knew I needed to go out and try and give my music every moment that it needed. I knew I was going to have to make a change.”

So, she packed her things, flew to Paris, rented a guitar and fully invested herself in writing the next chapter of her life and the album that would change everything.

Immersed in a city of culture and serenity — quite different from the hustle and bustle of her New York base — she soon found the music flowing from her. Recollecting the experience, she says everything about her French excursion was peaceful and, spending mornings sitting outside the cottage she was staying in, she easily found her muse to write the kind of music she had always longed to write.

Luckily, it wasn’t only music to her ears. As she connected with French artists, she soon found the encouragement she needed. She was invited to open their concerts and, through their reinforcement, found the strength to break from her comfort zone, leave her job and pursue producing her own music full time. Thus, “Heroine” was born.

Passion for Horses
Of course, Paris isn’t the only thing that inspired Kate’s ascent into the limelight. She also credits her equestrian, rural roots, which defined much of her upbringing.

“The album was influenced a lot by my upbringing on a horse farm in New Jersey,” she said. “Growing up in the peaceful setting of the country, there were so many times that I was completely lost in imagination, wondering and keeping myself occupied.”

Four-year-old Kate — already in the saddle

She also credits horses specifically as a source of inspiration. Growing up on her family’s Revelation Farms, and competing in saddle seat on American Saddlebreds alongside her sister, horses played a prominent role in her childhood to say the least.

“Growing up with horses was amazing,” she said. No stranger to the necessities of constant grooming, mucking and cleaning, she explained, “They teach you so much about work ethic.”

Caring for horses also helped develop Kate’s emotional connection to the world around her, which, in turn, helped develop her artistic ability. “The horses say so much to you without even saying a word,” she said. This, Kate explains, translates to a fundamental component of writing music — finding, understanding and communicating a story.

In the Limelight
Today, despite the newfound pandemonium of her musical career, horses continue to feature prominently in Kate’s life. She continues to ride and compete, including at the recent Kentucky Spring Premiere Horse Show in Lexington, while squeezing concerts into her hectic schedule.

Going forward, she also has a new avenue to infuse her passion for horses — her music and the visually artistic elements of her work.

“Heroine’s” cover, for example, depicts Kate astride Ghost, a borrowed Rocky Mountain shooting horse, and her new music video for “Whistle Cry” will feature several of her own horses at Revelation Farms, which continues to operate as a breeding, retirement and riding facility.

Kate, with one of her horses, during the shooting of her music video.

“He’s the kind of horse who gets angry if he isn’t part of the work crew every day,” Kate said. “The day of the video shoot there were ice puddles. Ace galloped and jumped over the huge puddles like hedges, almost like he was an eventing horse. We joked that we found his retirement plan.”

To be able to combine horses — specifically those who call the family farm home — and music was a dream come true for Kate, and she looks forward to continuing to enjoy both her passions.

“It’s been a true test of balance, just committing to as many shows as I can to fully give my all with horse shows and music shows,” she said. “That’s my new life now; that’s what I signed up for, so I’m giving every ounce I have to do everything.”

After all, that’s what a heroine does.

To listen to Kate’s work, check out her album on Spotify and visit her website at www.kategrom.com. 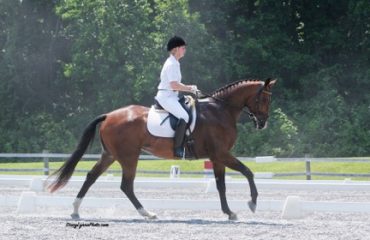 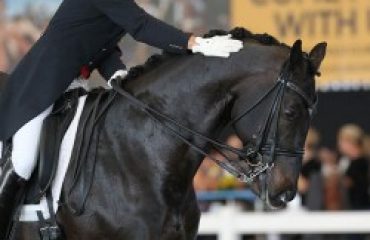