Louise Atkins is a dressage queen with a love for fancy off-the-track Thoroughbreds, so when she met Imperative, winner of $3.3 million on the racetrack, she was worried that he may not be meant for the dressage ring. But, over time, the little bay OTTB was able to win her over, just as he did with millions of fans during his racing career.

As a child growing up in a small town in Longton, England, Louise first started riding when she was 5 years old. “My sister and I actually wanted to start Morris dancing, which is a bit like cheerleading, but we were too young so we went for pony lessons instead,” Louise said. At their riding school in Leyland, Louise and her sister learned a little bit of every discipline and showed at local competitions.

Although she grew up riding, Louise never wanted to work with horses in her career. She didn’t feel that there was enough money in the sport in England at the time, so after college, she began working a government job. At this time, her close friend began a job at a sport horse breeding farm in Italy, and shortly thereafter, another position became available. Louise took the leap and left for Italy. “I bought a one-way ticket, as I knew I would be homesick and go straight home otherwise,” Louise said.

Several years later, and still working in the equine industry, she moved to a position in Holland with Olympic show jumping gold medalist Jan Tops. There she took care of his wife’s horses and travelled internationally to competitions with them. “We came to Florida to do the winter circuit and I loved it,” Louise said. “I knew I wanted to return and work in the States. So I did!”

When she was offered the job as a barn manager for international dressage rider Susie Dutta, Louise was skeptical about the dressage world and whether or not it could compete with the excitement of show jumping. After only a short time there, Louise fell in love with the sport. While working for Susie, she also had the opportunity to ride many of the young horses. When Louise founded her business in 2015, Cobalt Stables LLC, located in Glenmoore, Pennsylvania, she placed a strong emphasis on dressage training and the rehoming of young OTTBs.

Just four years after opening Cobalt, Louise set her sights on one of the largest Thoroughbred competitions in the country, the Retired Racehorse Project’s Thoroughbred Makeover. The competition boasts over $100,000 in prize money with ten divisions including show hunters, show jumpers, field hunters, dressage, eventing, polo, barrel racing, competitive trail, ranch work and freestyle, typically with at least 100 horse-and-rider combinations in each division.

In the months leading up to the 2019 Makeover, Louise trained a lovely 4-year-old bay mare, Kiss Me Candy, to compete in the dressage division, where they placed in the top half of a large class. “The 2019 Makeover was a fantastic experience unlike any other competition,” Louise explained. “It really isn’t about winning, it’s an amazing community that wants to celebrate this wonderful breed and support each other along the way.”

This year, Louise will be competing her three geldings, which are currently training for the dressage division. “After documenting my expressive mare’s journey in 2019, the fans she made were incredible and humbling,” Louise said. “I want to do as much as I can to support the other competitors and guide the first-timers.” Louise is particularly excited to be showcasing the talent of Imperative, fan favorite and winner of $3.3 million on the racetrack.

The Beginning of a Partnership

Even as a young horse, Imperative made it known that he was going to be extremely special. During his racing career, Imperative’s personality and winning record earned him a large fan following, and even into his retirement from racing his fan club continued to grow. One of his biggest fans was Louise. During a day off at the 2019 Makeover, Louise took a trip to the National Thoroughbred Welfare Organization (NTWO), where Imperative had been retired to. She fell in love with him and when asked to be his trainer for the 2020 Makeover, she was thrilled. “I originally said yes to taking him as I thought it would be a really great story for such a prolific winner to go to the Makeover,” Louise said.

“When he first arrived, he was super hairy with a long, upside-down neck,” Louise explained. “He was very detached and not at all interested in being loved on. During his first rides, I thought, What on Earth am I going to do with this horse! I’m never going to be able to make him into a dressage horse!”

As many horses do after their first few rides at Louise’s farm, Imperative received some well-deserved down time to relax, put on weight, and just be a horse. During this time, he changed immensely both physically and mentally, and has become just as confident in his second career as he was in racing. “His whole personality has changed; he is the star of the barn and he knows it. He wants attention all the time and is very demonstrative with his feelings. I feel we are very connected and he knows I am his person,” Louise said.

Once the connection was formed, Louise made the decision to begin his training for the Thoroughbred Makeover and his future as a dressage star. “I’m thrilled he’s got a new job,” John Greathouse, Imperative’s breeder, said. “He’s a horse that I’d imagine would like the action more than just standing out in a field eating grass. It makes me so happy to see people repurpose these lovely animals and give them a nice new home.”

Louise began consistent training with Imperative in early April 2020, when she worked to build his strength and re-muscle him to be more successful in his new job. Although her end goal is always to be able to ride a successful dressage test, Louise feels it’s very important for Imperative to be well rounded and enjoy his job, so she regularly hacks him outside of the ring and keeps his training different and engaging.

One of the most important training tools for any of Louise’s Thoroughbred Makeover horses is taking them on field trips, whether it be to school at a local farm or experience a horse show. This allows the horses to become more confident and relaxed in a high-pressure situation, and to no surprise to Louise, Imperative always handled his outings with grace. At his first horse show in June 2020, he received scores in the 60s in Training Level Test 1 and 2. Some of his more recent Training Level scores reach into the mid-70s.

“He has blossomed into an absolutely amazing horse to train,” Louise said. “He tries harder than any horse I’ve ever ridden. He may not be the fanciest or flashiest, but he loves to work and wants to do everything right. He hates to be anywhere alone, which for a dressage horse is a challenge.”

With the Thoroughbred Makeover approaching October 10–17, 2021, Louise and Imperative are working to give him more confidence when has to be alone, become a more harmonious team, and gain more experience in the dressage ring. “I think he will rise to the occasion at the Makeover,” Louise said. “He’s not usually spooky or worried about things. He will need a couple of days to settle in, but I think he will handle the atmosphere.”

With all Thoroughbred Makeover horses, the Makeover itself is only a stepping stone along the path to their new careers. Imperative is no exception. Louise recently gained ownership of Imperative, and she has high expectations for his future as a dressage horse. “After the Makeover, my plan is to work him up the levels, do recognized shows and qualify him for Nationals,” Louise said. “I would like him to be an ambassador for the breed.”

With countless fans nationwide and a strong support system, Imperative and Louise have a bright future ahead of them. “My goals after this year’s Makeover are to work towards my USDF medals and get Imperative as far up the levels as he can go. I want to continue to transition as many OTTBs as possible to their forever homes and hopefully build on Cobalt’s reputation for quality horses and good training,” Louise said.

For the time being, Louise is thrilled to be training for the Makeover and can’t wait to show Imperative off in Kentucky. “His heart is like no other,” Louise said. “I am humbled and blessed to be able to ride him down centerline at one of the biggest venues in the country.”

For more information, visit www.cobaltstablesllc.com and for information on the Thoroughbred Makeover visit www.tbmakeover.org 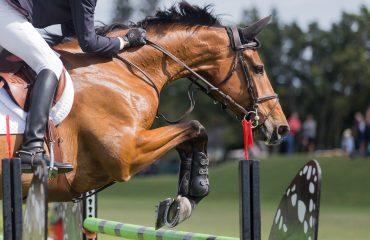 The Olympic Movement’s Role in Equestrian Athletes’ Right to Compete