By Elaine Wessel and Emma Miller

Maura Thatcher is the matriarch of Pony Lane Farm, a top-quality competitive hunter/jumper and breeding operation located both in Bluffdale, Utah, and Wellington, Florida. With a lifetime of equestrian experience under her belt, Maura has grown from the pony kid at the barn to an authority on equine breeding in the United States, and has successfully bred the winners to prove it.

A family affair since the beginning, Pony Lane Farm is thriving with the help of Maura’s two daughters, Kelsey and Maddy, and her husband, Steve. With Maura at the helm of the breeding program, Steve has assisted in the daily operations of the farm as well as served as a loyal horse show dad to Kelsey and Maddy. Each of the girls has achieved considerable success in the hunter, jumper and equitation rings at shows across the country, most recently under the tutelage of Maggie Jayne and Haylie Jayne-Rolf of Our Day Farm in Elgin, Illinois. Since teaming up with the Jaynes, the Thatcher sisters have navigated numerous elite horses to grand prix wins as well as equitation and hunter championships, and Pony Lane Farm has benefitted from access to a steady string of high-performance horses who enjoy a second career in breeding.

Sidelines had a chance to catch up with Maura to chat about her start in the equine industry and the family business as well as her inside perspective of American breeding and the accompanying challenges.

Maura and Like I Said
Photo by Irene Powlick

How did you get your start with horses?

I grew up on an island in Washington — Vashon Island, kind of in the Seattle area — and I rode at a barn called Parkside Stables, which is in Bellevue. In my teen years, I started horse showing.

Did you horse show throughout your adult life? How did your children get started with the horses?

I did show as an adult. My husband was in the Navy and we got stationed in Pensacola, Florida, and we eventually got moved to Savannah, Georgia, and that’s how I met Jack Towell. I bought a horse from him and I would probably do four or five horse shows a year. I had one horse and I bought an investment pony, and then my husband took a job in Utah so we moved to Utah and moved them across the country.

I rode in the local horse shows until the kids got old enough to really start showing, and then we rode with Molly Rinedollar and did a lot of pony stuff. I bred a few ponies, but mostly what we would do is take the ponies that Molly’s mom had to Utah. The girls would put a few months on them, and we would take them back and they’d be sold. We rode with Molly for four years, and then the girls wanted to do some of the bigger stuff and do horses. We were looking for an equitation horse when we were introduced to the Jaynes. That’s when Kelsey decided she wanted to do the Young Riders and so it seemed like a natural move for her to ride with the Jaynes. The following year Maddy rode with the Jaynes too.

How did you get started in breeding?

We formed Pony Lane Farm, LLC, in 2002 in Utah. I bred a children’s hunter to a small pony, and we got a large pony. He is still with Molly Rinedollar. He ended up going there and getting sold through her and he has come back to her. So that was my first one, and we bred Maddy’s pony Hillcrest Blue Qwilt. As far as breeding the horses, one of Kelsey’s first jumpers was Milous De Fontaine and the first year I had him I bred him to one of Kelsey’s other jumpers — an Indoctro mare — and somebody also gave me a free mare to breed, so I bred two the first year. One is in Utah and she does the local horse shows, and the other one is a low junior jumper. That was my first year, and that group, they’re 8 this year.

Maddy Thatcher and Like I Said enjoy a bonding moment together in between classes.
Photo by The Book LLC

What do you look at when purchasing horses?

Klotaire and Dulf were bought as performance horses, and the fact that they were stallions that were well-bred made it fun. Almost every single mare that I have bred has been one of our performance mares. Among them, Francesca, Caretina, Carlotta — they are all horses that we have shown and the kids have shown. I’ve learned through the years that when breeding horses that have been in your program, you know them really well and you like their characteristics, and that’s what’s important. They are also all very well-bred mares, so when I consider buying a mare, I always look at the background, I always look at the breeding. I even do that with my geldings.

What were the challenges to getting your stallion and breeding operation up and running?

The biggest challenge is that people in America don’t want to buy young horses. They want horses that are jumping around, whether it’s 7, 8, 9 years old, and it’s quite costly to keep them until that age and promote them. If I could sell them as yearlings and 2-year-olds then I could regroup and make a little money at that point versus selling a 7- or 8-year-old, because you’ve put a lot more money into them. The other biggest challenge is where we live — being able to get those horses out and seen. The market in Utah isn’t very big, so I have to advertise to get people to look at the horses. I have been selling horses more recently in Utah and more people are paying attention to these nice horses, and the fact that they are very reasonably priced.

How has working with the Jayne family helped you to build the business?

I think they’ve helped with the knowledge about the business. The horses that we’ve chosen to have as performance horses are basically what’s made people say, ‘Pony Lane had some really nice horses, and has some really nice horses.’ They have helped me to look at horses that are going to perform in the ring. To me, you can have the bloodlines but if they’re not going to perform in the ring, then people aren’t going to breed to them, as far as stallions go. I always want horses that are going to go out there and perform and be able to win against the top horses in the country, and so they’ve helped me to pick those horses and to find those horses.

Kelsey Thatcher and Karlton
Photo by The Book LLC

How has your family played a role in the business and the horse show lifestyle?

I think that’s one of the most important things to me, and I’ve always said to the girls, ‘If you could never show again, I still hope that you want to have the animals, because I enjoy just having the horses. We have a lot of retired horses in Utah and some of them can do a job and some of them can’t, but I feel like we have made a commitment to those horses. As a family, it’s been a huge focus for us.

My husband quit work for four years so that he could be with the girls, and be the horse show dad and kind of understand what that was. He will go out and feed horses; he’s just as much a part of it as the rest of us at the farm. The girls grew up cleaning stalls in the morning before they went to school. They know how to feed horses, they know how to muck stalls, they know how to wrap — they can do it all because they did it all growing up.

What makes your current stallions stand out, and why are they special?

I think they stand out because they have been performance horses for our family. Klotaire was a great horse for Kelsey, and now that he is retired, just the fact that she won so much on him makes him special, and the same with Dulf. Now Standing Ovation is stepping into that role as a hunter for the girls. Maddy started riding him and the plan is that he’s going to switch to Kelsey’s horse because Maddy will be going to law school next year, so she won’t have as much time. I think just because they’ve been show horses for us and they’ve won lots of great things, that makes them extra special.

What are your aspirations for Pony Lane Farm and the breeding program?

I would love to have some great performance horses that we breed. I currently have two 4-year-olds that I’m going to hang onto and hopefully promote. One is Chill RZ out of Carlotta — that’s Chances R — and the other one is Drake — and he is Dulf out of Caretina III. I’d like to see what those horses develop into. I’m not as stressed about selling them because I think they’re probably my two nicest right now. At some point, I’d love to see the girls riding horses that we bred. 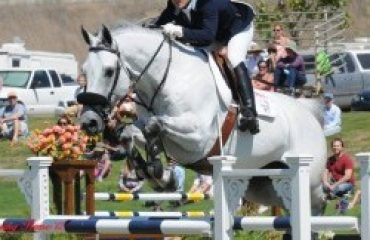 Ladies Dominate the Field in the $30,000 Red, White and Blue Classic Grand Prix 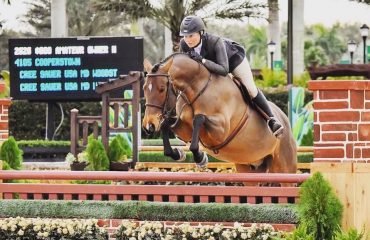 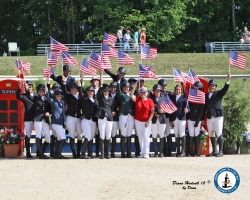