In October, the Texas A&M Aggies received a call that would provide them with a once-in-a-lifetime opportunity and bring recognition to collegiate equestrian sports. The call was from the White House, and three weeks later they were on a plane to Washington, D.C. On Friday, November 17, the White House held a collegiate sports championship recognition day, and Aggie Equestrian became the first-ever equestrian national championship team to be recognized.

“The first thing we had to do was talk to Oklahoma State University because we needed to change the date of our meet,” said Abby O’Mara, the Aggies’ assistant coach. “We said, ‘We are going to have re-schedule because we just can’t say no to this opportunity.’”

The OSU head coach was very understanding, and the Aggies were soon headed to D.C. The White House gave them a total of 20 spots, so the team took the 2017 Nationals starters and staff. The morning of the recognition, the White House told the teams if they arrived early, they could have a tour, but as it turned out, that wouldn’t be their only tour.

After the main tour, the teams had an opportunity to mingle with other teams before they were ushered into their spots for the photo opportunity. “Our photo spot was right outside of the Oval office, so it was really cool,” Abby said.

The Texas A&M Aggies on the steps of the White House during their trip to Washington, D.C. for a collegiate sports championship recognition day where Aggie Equestrian became the first-ever equestrian national championship team to be recognized.

“I don’t think that was planned,” said Alex Desiderio, a senior at Texas A&M. “He just told them to take us in there and you could tell all of the guards were unprepared. That was an unbelievable experience. Not many people can say they’ve done that.”

The Texas A&M Aggies are the first of hopefully many years of equestrian teams to be recognized at the White House.

“I just think for our sport, it’s unreal,” Alex said. “For the first time ever, the NCEA has gotten this kind of recognition, and it’s is just awesome.”

Learning To Stay Calm in the Ring 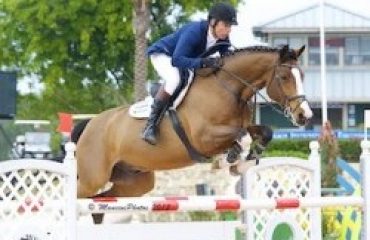