I’m starting high school soon, and the other guys in my class think riding is just for girls. I love riding and I love my horses. They think this is a “girly” sport that no guy would ever do. No, it’s not football, baseball or soccer but it’s my sport of choice. How do I convince them that this is a gender-equal sport?

Do men and women ever compete against one another in the same sport on the same playing field? Yes, but rarely. Competitors in a sport are usually split according to sex — except in the equestrian community. Men and women compete against one another on the same playing field, are judged by the same rules and are evaluated in the same manner with no concern of gender. From the racetracks of Thoroughbreds to the cross-country courses of eventing, and from the hunter-jumper rings to the dancing of the dressage discipline, all competitors, male or female, are judged equally.

The ability to finesse an animal weighing more than 1,200 pounds is not dependent on grit and muscle. The relationship between human and horse is based on confidence and communication between the rider and his or her four-legged steed.

A horse isn’t going to care if you’re male or female. That horse is still going to want to be brushed, to receive hay, feed and fresh water. Girls and boys alike can give a horse a bale of hay – the weight doesn’t change depending on your gender. At the end of the day, the same chores need to be done, the same physically demanding work needs to be done, and working in the barn will help build muscle and endurance.

If any of your friends go to a local horse show, it’s easy to see how they might think it is a sport for girls. After all, there is a disproportionate number of females receiving ribbons at the local and regional levels — but, if you look at the entries, it’s likely because there is a disproportionate number of females competing! As you get to the middle levels, males and females receive ribbons in a more balanced manner.

Oddly enough, men tend to outnumber women on the podium for international and higher-level competition. Across the planet, approximately 75 percent of equestrian competitors are women.

Our sport isn’t a sport of brawn over brains; it is a sport of intelligence, precision and harmony working with strength, flexibility and endurance. It isn’t easy to direct a 1,200-pound animal, or stay on — and balanced — while soaring across the sky over large jumps. It’s still a sport. You are engaging your muscles while sitting on a horse’s back — you aren’t sitting there as though you are sitting on a chair at a table.

You’ll get dirty, smelly and sweaty when working at a barn and riding. Perhaps even as much so as if you were training on a football field with a high school or middle school team. Equestrian sport, however, is typically not a team sport and is more individualized.

There are many famous male equestrians, whether they are selection committee members, course designers, stewards or top federation officials. There are also famous women in those positions.

A horse doesn’t care if you’re male or female; your gender doesn’t impact your ability to soar over a jump, switch leads or walk/trot/canter. What’s really great about equestrian sport is that it doesn’t destroy your body like football, soccer and basketball do. Equestrians can be competitive well into their later decades – even in their 80s. Different disciplines allow for different strengths, and offer different opportunities.

So, remember to point out to your high school buddies that most sports segregate male and female competitors to ensure the sport is more competitive and enjoyable to watch and play. The physical differences between men and women are not taken into consideration in the equestrian world; the horses become an equalizing factor. Because of that unique partnership, the ability and attributes required to be successful in this athletic discipline are totally equal, which is quite a rarity.

In general, if they’re classmates, like with your friends, perhaps you should take the time and educate them. Let them know how competitive and unique the equestrian world really is. Then, invite them to mount up. You’ll see their respect grow, especially if they’ve never stood beside a horse before.

And remember, you chose to be an equestrian. This is a choice you are making. There will always be people who challenge your choices.

Continue to ride and to follow your passion. You love riding; stay with it. You will continue to grow as a person, while making friends who support your goals. 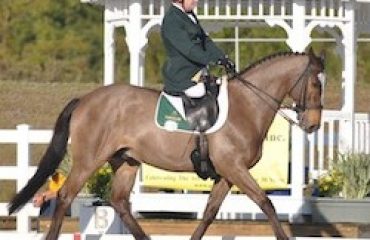 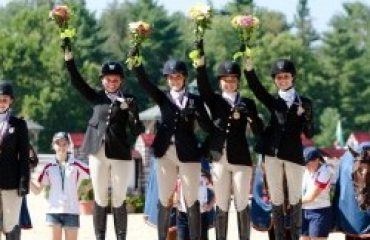