When we talk about the mind, we usually separate it into two parts: the conscious mind and the subconscious mind. These two parts make us who we are. To reach our true potential, it’s important to utilize each part of the brain the right way.

In speaking with and questioning various riders, some well-known and some up-and-coming, it was interesting to find out where their thoughts were as they navigated their courses.

Jordan spoke about the difference in her mental state when she was a junior rider as compared to now, being an amateur. As a junior, she rode so many horses that her mind would often wander. The repetitiveness of her rides imprinted what had to be done. This is an example of when the subconscious mind guides with little interaction from the conscious mind. Now having only one horse to show, her attention is much more conscious and she focuses on presentation, brilliance and consciously wanting to win. She referred to her show demeanor now as being more serious.

Darragh responded with a laugh as he replied, “My thoughts? What’s for dinner?” He went on to explain that in the less-important classes, his mind wanders. He notices who’s at the ring or he might wonder about what’s happening with some of the horses at home. This is an example of being totally at ease and letting the subconscious mind do what it knows how to do: get the job done. However, when it’s a big class, Darragh speaks about being tuned in to his horse, how he’s going, what he’s feeling from his horse, what he needs to do to go clean. Although there’s help from the subconscious mind, the conscious mind is also at work, quickly going from one thing to another and not focused on any one thing.

Sam immediately responded with a smile and laughed. He said he sometimes rides around with music in his head: Mario Kart music or the theme song to Ted Talks. Sometimes there are just random thoughts floating through his mind. I specifically asked if he ever counts as he’s riding and his answer was yes, each stride being a syllable in a repetitive word. Moreover, sometimes his mind is totally blank: no thoughts, nothing at all in his mind. This is an example of being “in the zone.” The whole course is ridden with no conscious thought. This is the energized focus and pure involvement sought in all sports. For some, it’s quite natural. For most, it takes time and effort to attain this level of mind-body performance.

Erica laughed as she explained how she mentally talks to her greener horses. There’s also music in her head as she goes around. She guides her horses with mental directions and keeps them calm with her thoughts.

“Who’s watching my 6-year-old?” was the laughing response Liza gave. She went on to explain that she does a pre-course prep that consists of visualization and breathing that helps her stay in the moment when on course. She’s always focused on and aware of her horse’s response to her aids and she rides the course — in parts. When it’s a big class, she seeks that time alone that aids her in finding her “zone.”

Cat responded with a chuckle and said she sometimes sings along to any music that’s playing when riding. But in the bigger classes, she’s super focused on the first jump and then she thinks about nothing. “It just happens!” Here again, an example of being in the “flow state.”

These are individuals that have reached quite a high level of performance in the sport of riding. Most of us will probably never stand on a podium, have a medal hung on our necks or lead a string of horses around a huge field while the cameras follow us. The real question is, how do they achieve this state of mind and can anyone clear their mind and reach the flow state?

The answer is yes!

For the rest of the month, become more aware of your thoughts when you’re riding. We’ll visit the process of reaching “the zone” or “flow state” next month.

Darragh Kenny, competing at the Palm Beach Masters, shows his ability to be in tune with his horse while competing in a big class. 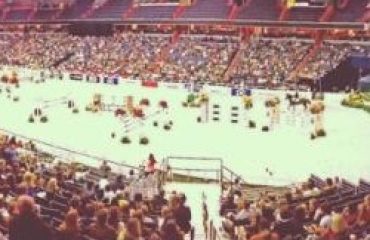