Tigger with her dog Wookie
Photo by Lindsey Henry

Tigger Montague, the founder of BioStar Whole Food Supplements, certainly has a lot on her plate running a company and interacting with horse people around the globe. But Tigger has plenty of energy to handle a busy life. Her real name is Cynthia, but since childhood she has gone by Tigger. “I reminded my parents of Tigger the tiger when I was a kid, always bouncing around,” she said. Years ago when her grand prix dressage horse, Lionheart, suffered from inflammation of the bursa, Tigger decided to put her experience as a consultant for a human whole food supplement company exploring raw food options to the test. After feeding Lionheart a combination of sprouted foods and whole foods, he became sound — and with that, Tigger became an entrepreneur and BioStar was born. Many of the BioStar canine products feature Australian shepherds, and that’s not surprising since she has five: Kemosabe, Thunderbear, Buckaroo, Crockett and Wookie.

I grew up in Greenwich, Connecticut, and started riding lessons when I was 6 or 7 years old at Sis Kelsey’s (known fondly as Mrs. Kelsey). In the summers, I attended her Pony Day Camp. I competed in some local shows and gymkhanas. I was so desperate to ride that I made friends with one of our neighbors’ cows (who unbeknownst to me was actually a bull) and I rode him around the field bareback. My mother was none too happy to find out about this, especially after I told her the “cow” I had chosen to ride had a ring in his nose. I never had my own horse until I became an adult.

How did BioStar get started?

My Grand Prix horse, Lionheart, was suffering from inflammation of the bursa and my vet, Dr. Tim Ober, did everything to help Lionheart come sound. Finally, Tim said we had to nerve him. At the time, I was working as a consultant for a human whole food supplement company that was exploring raw food options, and I decided to give sprouted raw food a try for Lionheart. To my shock, he improved. Then Tim suggested I look at ways to increase nitric oxide, so I researched foods high in the amino acid arginine, which is a substrate for nitric oxide production: put the foods together in a bar, dehydrated the bars, and started feeding them. Lionheart was sound three weeks later. That winter I was shipping containers of my homemade bars to Tim in Wellington for him to try on various horses. I think by the end of that winter, I had hand-made several thousand bars. When Tim returned, he encouraged me to make the bars commercially and so BioStar was born. Lionheart is now 32 years old and still lives with me.

What’s your favorite thing about being an entrepreneur?

Freedom to think out of the box. Last year, I started another company called Seeds for Kindness that represents artists and small companies around the world whose handmade products are made from recycled and upcycled materials that would normally be thrown into landfills or would end up in the ocean as floating garbage. Each item on Seeds for Kindness has a story. Seeds for Kindness donates profits to environmental charities.

Being with the horses

If you weren’t involved with the horse world, what would you do?

Be a wildlife photographer

Go back to Alaska!

We are all connected.

Treating the earth as if it were our home

Spending time in the wilderness

I would like people to remember me and smile. 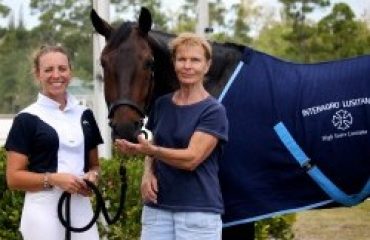