Richard Wheeler, DVM, was born in the U.K. and graduated from the Royal Veterinary College, London, in 2002. Dr. Wheeler then completed a two-year internship at Greenwood, Ellis and Partners (now Newmarket Equine Hospital) in Newmarket. In 2005, he moved to Wellington, Florida, to join Palm Beach Equine Clinic and he became a partner in 2009. Dr. Wheeler’s primary concentration is equine sports medicine. He is an FEI Veterinary Delegate for show jumping and dressage and has authored several published articles on the topic of equine sports medicine. Dr. Wheeler has served on the board of the USHJA Horse and Rider Advocates Committee. In 2016, Dr. Wheeler became a founding director of the Sport Horse Research Foundation. Dr. Wheeler and his wife, Jessica, have two children. Do you have a question you want Dr. Wheeler to answer? Send questions to editor@sidelinesnews.com.

My veterinarian said my mare’s joint disease is soon going to be at the point where she needs medicine such as steroids. I saw that there are other options, such as Platelet Rich Plasma and Interleuken-1 Receptor Antagonist Protein. What are some of the benefits of the more natural treatments?

Joint disease is one of the most common causes of lameness in horses. Historically, intra-articular corticosteroid injections have been very useful in the management of joint disease in many species, including both horses and humans. The use of corticosteroids has been somewhat controversial, and there have been concerns with regard to deleterious effects on articular cartilage. In my opinion, when used judiciously, they are still very useful, and I believe the negative reputation is associated with excessive use and inappropriate case selection (such as in the face of more significant joint injury).

IRAP is a naturally occurring protein that blocks the inflammatory action of a cytokine (interleukin-1). In using IRAP, we are harnessing the body’s natural anti-inflammatory mechanism. The collection of IRAP involves collection of the horse’s blood, which is processed to produce an autologous conditioned serum (ACS) containing IRAP. When IRAP was first used several years ago, we would often select cases that had become refractory to the use of corticosteroids; more recently, we use it as a first line of defense.

Platelets are cell fragments found in the blood circulation, produced along with red and white blood cells in the bone marrow. They provide a vital role in blood clotting and also contain an important group of chemicals called growth factors. During normal healing, these factors promote tissue repair, regulate inflammation and stimulate the recruitment of stem cells to the area of injury. The production of PRP involves collecting a sample of the horse’s blood and concentrating platelets in a portion of the plasma. This concentrated portion can then be injected into a joint or soft tissue lesion.

A stem cell is undifferentiated (has not yet developed into a specific cell type), is capable of self-renewal and is able to produce specialized cell types. Stem cells are found in tissues such as bone marrow, fat and dental pulp. In young, growing animals, stem cells are plentiful and found in most tissues; as the animal matures, a smaller reservoir of stem cells remains for repair. Two types of stem cell treatment are readily available: autologous (using cells from the patient) and allogenic (using a donor’s cells).

At Palm Beach Equine Clinic, we’ve used stem cell therapy for several years with excellent results. Scientifically, it appears that while the results are very encouraging, we still don’t fully understand the mechanism of action. More research is needed and I hope the Sport Horse Research Foundation will be able to answer some of these questions.

To answer your question more directly, I would encourage a discussion with your veterinarian. Depending on the specific diagnosis and financial concerns, regenerative therapy may well be very useful in treatment of your horse’s joint disease. We commonly use these therapies alone and in combination. Adverse reactions are rare and we’ve seen excellent results.

Dr. Katie Atwood of PBEC’s reproduction department using a microscope as part of a reproductive procedure.

I’d like to breed my mare but she is at an amazing point in her career and she truly enjoys competing. I don’t want to sideline her for a year. What are my options?

I asked one of PBEC’s reproductive vets, Dr. Katie Atwood, to help with this question.

This is a common issue we see during the competition season in Wellington and we’ve helped many talented mares produce foals while still competing at high levels.

There are a couple of options for your mare. The first depends on the level of competition your mare is in. Most mares can carry a foal and remain in work for much of their pregnancy. We typically recommend that pregnant mares stop performing high levels of work around eight months of gestation, or sooner if she becomes unable to perform her job comfortably. The mare will be out of work for a much shorter time frame. She should be able to return to light work when the foal is about 45 days old. The foal can accompany her in the arena for training, though showing with a foal by her side would not be recommended. Some governing bodies have restrictions on competing mares while pregnant; under FEI rules a mare may not compete after their fourth month of pregnancy or with a foal at foot.

The second and best option, in my opinion, to get a foal and allow your mare to continue to compete is to use a surrogate, also called a recipient, mare. Your mare will be inseminated, and at seven or eight days of pregnancy, the embryo will be flushed from her uterus and implanted into a young and healthy surrogate mare. The foal will only carry DNA from your mare and the stallion you choose. The recipient mare will carry the foal throughout pregnancy and will raise the foal as its own, and your mare can continue in the show ring. There is little to no downtime for your mare with embryo transfer. Though your mare would not get to “be a mother” in this instance, you can potentially get several foals from your mare in a single year. 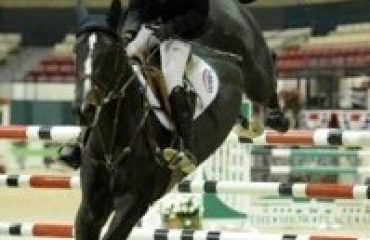 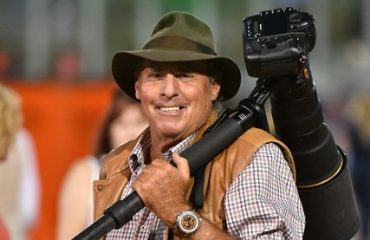