He’s got power, speed and scope. And a little bit of attitude — which is clear to anyone who watches him artfully execute forward-leaping bucks through complicated show jumping courses.

But don’t let him fool you. And don’t worry, the bucking isn’t a problematic vice for Irish rider Darragh Kenny — it simply means that the 16.3-hand bay stallion Imothep (Indoctro x Calvados x Dominard) has his game face on.

The Hyperion stallion has quickly risen through the ranks — becoming a horse to watch on the international scene. With less than a year together, this horse and rider team has enjoyed a meteoric rise.

According to owner Vicky Castegren, heads really started to turn when the talented duo came out of the woodwork to conquer the Nation’s Cup at Aachen, with one rail down in the first round and a clear round in the second. Continuing with their success, the team had brilliant rides at the Nation’s Cup at Hickstead and Dublin — with only two rails down total in the three Nation’s Cup events.

The 11-year-old son of Indoctro quickly proved he was a force to be reckoned with — especially with Darragh on his back. People were beginning to see what Vicky had known all along: This horse has talent. “He put himself on the world stage,” she said. “We’re supporting him, but he did it himself.”

After Hickstead, his Hyperion Stud family knew they had a shot at the 2014 Alltech Word Equestrian Games — something Vicky hadn’t dreamed was possible to achieve in such a short amount of time.

“We knew it was a championship year,” she said. “We pretty much thought that ship had sailed. And then when Darragh got on him, we had to have a period of building and them getting to know each other. Did we think the relationship would blossom? Yes. Did we think it would blossom this fast? Heck no!”

But the relationship did blossom quickly and, before they knew it, Imothep and Darragh were headed to the World Equestrian Games, ultimately finishing 12th individually and helping Ireland secure a seventh place finish overall.

His fans couldn’t believe it.

With all the power behind this stallion, you’d think he might be a handful. But according to Vicky, his biggest fan, Imothep is really just a sweetheart.

“He has his quirks when you’re grooming him, but he’s very sweet in the stall,” she said. “You can hug on him. You can kiss him. My 4-year-old daughter likes to snuggle on him. He’s really, really sweet.”

At the same time, he seems to know that he’s quite the champion. “He knows he’s the king of the barn,” laughed Vicky. “He’s laid back, but when he comes out of the stall, he’s ready to work.”

In addition to making it clear to his two-legged friends that he’s all that with his jaw-dropping style, Imothep also ensures the horses around him know his status as king of the barn. “When a new horse comes in next to him, he’s like, ‘Who are you and why are you in my stable?’” Vicky chuckled.

But king or not, Vicky makes sure he has time to be a horse — which means that when he’s not racking up ribbons, he’s out in the pasture looking like a pig. “He rolls right in the mud and he has it in his ears and his eyelids and that’s fine with us,” Vicky said.

What he’s not doing is jumping over the pasture fences, because after several stunts involving an energetic stallion and an inviting fence line, Vicky had to install an electric wire three feet above the top board.

Vicky says that so far Imothep seems to be passing his even temperament and athletic ability to his progeny.

“He’s passing all the temperament and the willingness to work,” Vicky explained, “and he puts a really solid hind end to his foals and he offers that signature power to his offspring. He’s been great at producing foals who have championships at their inspections.”

Already, he has produced a champion colt in Germany and two others in the United States. His 2011 colt Gustav HS earned a high score of 86 at his foal inspection with the BWP, tying him for first place with three other colts in North America. His 2012 colt, Hero, was Site Champion for Young Jumpers and Jumper Foals at his KWPN inspection and was Reserve Champion in North America.

As his foals begin to age into their careers as sport horses, Vicky eagerly anticipates following their successes.

For Vicky and her family, Imothep is a bit of a fairytale. As her first stallion, he’s the face behind Hyperion Stud. And rightfully so.

Inspired by her success with Imothep, Vicky has established a business in which she can help other stallion owners explore breeding opportunities. “There are a lot of great stallions here in North America — especially in sport. But you have owners who are interested in the breeding part because they recognize they have a good horse, but either don’t want to or don’t know how to get involved. That’s why I’m here, because I can help those people.”

Hyperion Stud now claims 20 stallions for their 2015 stallion roster, with breeding opportunities available in the U.S., Holland and Germany. And Vicky says she has her own personal fairytale with Imothep to thank for it.

And this is only the beginning of Imothep’s story… 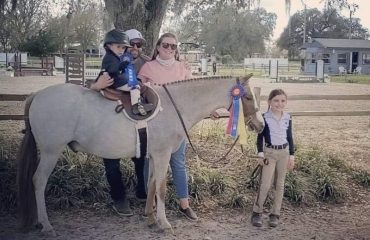 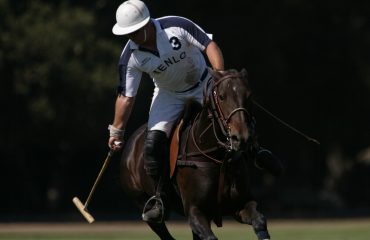 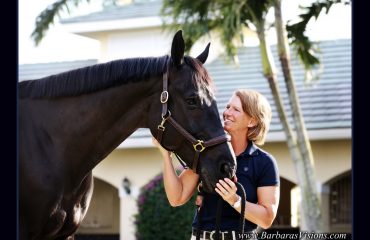